Can you see me now?

An installation of cellphone photos mesmerizes with variety, spontaneity - and anthropology 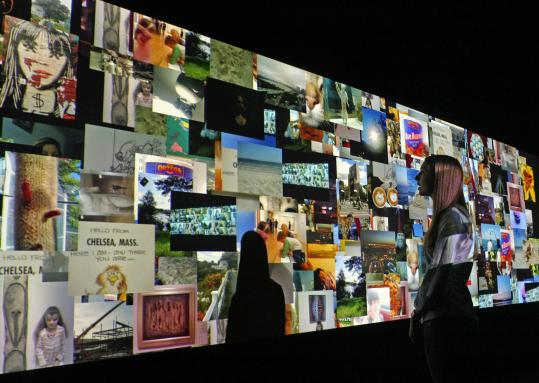 WELLESLEY - Alex Goodman’s favorite cupcake is a chocolate affair topped with a swirl of bright pink frosting from Susu’s Bakery Boutique on Washington Street. She likes it so much, she took out her cellphone one day and shot a photo of a cupcake before she ate it. Goodman, 21, a senior at Wellesley College, uses the image as the wallpaper on her cellphone.

Now, in a darkened gallery at Wellesley’s Davis Museum and Cultural Center, Goodman is contributing to an installation called “Cell Tango’’ by e-mailing her snapshot to pix@celltango.org.

“Cell Tango,’’ a constantly evolving piece by artists George Legrady and Angus Forbes, features e-mailed cellphone photographs projected rhythmically over a large, black screen in a variety of patterns. First, the most recently submitted images swiftly fill the screen in a mosaic. Then some of those images link to pictures with the same tags drawn from Flickr, the photo-sharing website. The tag words appear, adding a layer of poetic meaning. And other patterns evoke fireworks, with clusters of photos exploding, sometimes linked by their tags.

In a flash, Goodman’s cupcake appears, its pink frosting glowing.

Sarah Dickerson, 21, another senior, stands nearby, e-mailing a photo stored on her phone: M&Ms arrayed on a white sheet of paper.

Dickerson recites her tags: “candy, geo-science, sweet, yummy, team.’’ The M&Ms were used in a geoscience class to illustrate the distribution of minerals in the earth’s crust, she explains. But she has added “sweet’’ and “yummy’’ hoping to link up with the cupcake.

“Cellphones are the current multipurpose tool,’’ says Legrady over the phone from Los Angeles. He teaches digital media arts at the University of California at Santa Barbara.

Some use the tool more spontaneously than others. Last year, “Cell Tango’’ appeared in central France in an exhibit related to a theater there. The people who came, Legrady says, were in their 40s and 50s.

“They were not as invested,’’ Legrady says. “They’d send photos of a soccer team, or a painting. It was more formal. There was not the range of expression.’’

“I’m not a cat person,’’ Legrady says. “I used to teach photography, and the first rule was: no cat or baby pictures.’’

But there are no rules for “Cell Tango.’’ Flickr has a screening device for inappropriate material, which keeps the installation PG-rated. “I’m using the artwork to study images, as an anthropologist would collect information,’’ Legrady says. “For me, it’s an occasion to build a database I can study.’’

Database art, in which information is the artist’s main medium, has been around for 20 years, and especially active in the last decade, says George Fifield, director of Boston Cyberarts Inc. Legrady loves “collecting the ephemera of life and databasing it in an interesting and beautiful way,’’ says Fifield.

“Cell Tango’’ has many delights, principal among them the thrill of seeing your own picture influence the way the patterns unfold on the screen.

“With camera phones, a whole new vista of co-construction between artist and audience can take place,’’ says James E. Katz, director of the Center for Mobile Communications Studies at Rutgers University, who will give a talk at Wellesley related to “Cell Tango’’ on Oct. 19.

Inviting everyone to participate in the art-making democratizes the process, as well as the institutions where the art is shown, Katz says. You can contribute a shot of your road trip, or your barbecued ribs, or even your toast.

“It calls attention to the underappreciated parts of daily life,’’ observes Katz. In a field that has traditionally celebrated technical virtuosity, he adds, “Now there’s a competing notion that we can raise any aspect of human existence to the level of interesting contemplation.’’

Back at “Cell Tango,’’ the students watch pictures float and cluster over the screen. This isn’t the first time they’ve made their mark on the exhibit. Dickerson e-mailed an image of the Pompidou Center from Paris over the summer. She tagged it “Paris, France, nostalgia, and romance,’’ she says.

“It’s interesting how people tag things based on their emotions,’’ she observes.

That’s one reason the installation grabs people. “Even a badly shot image has meaning to the person who shot it,’’ says Fifield.

But even if you don’t contribute, “Cell Tango’’ rivets your attention. The images arise and disappear in a hypnotic rhythm. Tags come up in groups, in a kind of free association. Images that you wouldn’t think belong together somehow link up, leading the viewer down strange narrative pathways.

“Look, there are some construction workers with my cupcake,’’ Goodman points out.

After three weeks, the Wellesley archive for “Cell Tango’’ has accumulated more than 400 images.

“I want to make the artwork a conversation, a meeting place,’’ says Legrady. “The artist creates a context, a sandbox, and the public is invited to participate in that sandbox.’’