This ‘Hound of the Baskervilles’ is a howl 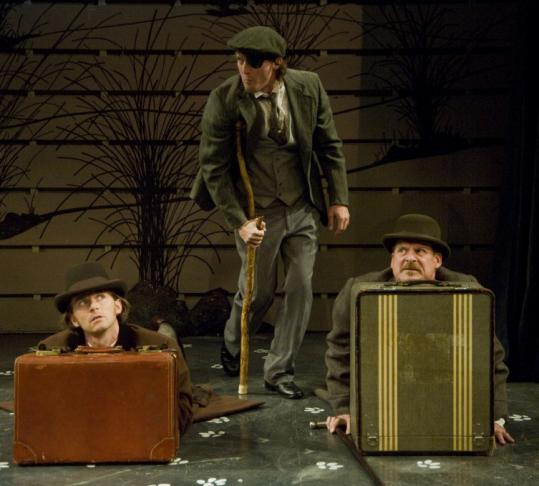 LENOX - Actors are sure getting a workout on local stages. From “The Mystery of Irma Vep’’ at the Lyric Stage Company to Orfeo Group’s “The Complete Works of William Shakespeare (Abridged)’’ and the recent Broadway - by way of the Huntington Theatre Company - hit “Alfred Hitchcock’s The 39 Steps,’’ scripts requiring actors to take multiple roles have become all the rage. The latest addition to this delightful genre is a British adaptation of Sir Arthur Conan Doyle’s “The Hound of the Baskervilles,’’ making its American debut at Shakespeare & Company under the deftly comic direction of new artistic director Tony Simotes.

And what a treat it is! Company veteran Jonathan Croy fields the role of Dr. Watson (endearingly dim here), while Josh Aaron McCabe and Ryan Winkles juggle more than a dozen characters between them. McCabe is always Sherlock Holmes - when he’s not playing the blind, aloof butler of Baskerville Hall or the suspiciously helpful local “naturalist’’ Jack Stapleton or, best of all, Stapleton’s “wi-wi-wi . . . wonderful sister,’’ the Hispanic spitfire Cecille (pronounced “Thethille’’), she of the come-hither look and muscularly snapping fans. Winkles is adorably adaptable, morphing instantaneously from ingenuous heir apparent Sir Henry Baskerville (derided for his Canadian provenance) to a Cockney cabbie and Scottish yokel, among many amusing guises.

It’s an intricate, convoluted plot, and the action never flags. Should you lose track of the various red herrings being brandished about, there’s a handy speed-through recap at the top of Act II that’s even more side-splitting than the whole of Act I. The sight gags and unrepentant punning honor the best of the British music hall tradition. Pants drop like clockwork, and the fourth wall is breached with abandon. (Sit in the front row and you risk having a suspect tumble into your lap.) And yet all the naughtiness stops shy of a PG rating: You could safely take the little ones, and should.

They might not get the occasional Shakespearean allusion. (While cutting some less-than-winning passages from the original script, Simotes has tossed in a few sly references to “the Moor,’’ as opposed to “the moor’’ - a nod to his recent rendition of the far more somber “Othello.’’) However, no one is immune to the image of feckless city folk inopportunely sinking into a treacherous bog, a mime that never fails to tickle. Really little kids might be spooked by Michael Pfeiffer’s highly effective sound effects - the recurrent canine howl has the power to raise the hair on one’s arms - but such frissons will be forgotten and forgiven by the time the mystery resolves in a welter of doggy puns, of the sort that fledgling humorists dote on.

There’s plenty of material, in an arch, Monty Pythonesque mode, for adults to savor as well. If your idea of fun is two hours of laugh upon laugh, you’re guaranteed a good time.

THE HOUND OF THE BASKERVILLES