Karamazovs lose the muse in ‘Flings’ 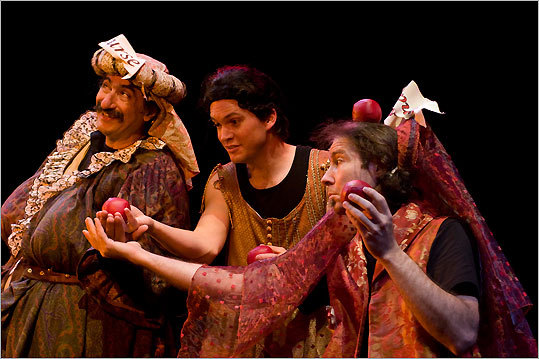 LOWELL - Timing is everything, especially when we’re talking about the juggling genius of the Flying Karamazov Brothers. The imaginative quartet have been known to juggle everything from flaming torches to frying pans with equal elan, and they often frame their circus antics with a silly story. So it’s disappointing to report that in “Flings and Eros,’’ a world premiere at Merrimack Repertory Theatre, the timing is off, and the show feels tired.

The fundamental flaw in “Flings and Eros’’ lies in the Brothers’ indecision about what story they’re trying to tell. “Flings and Eros’’ uses Shakespeare’s tragedy of “Romeo and Juliet’’ as a starting point for comic routines. The Karamazov Brothers are no strangers to Shakespeare, having interpreted “The Comedy of Errors’’ in a much-celebrated production that ran at Lincoln Center in the late ’80s. But the tale of the star-crossed lovers stumps them. Although there are some clever fight scenes in which the juggling pins stand in for swords, we wait in vain for the Brothers’ creative approach to the material.

Director, writer, and performer Paul Magid frames the show by saying the audience has been invited to a rehearsal. This allows the Brothers to break the fourth wall and talk to the audience out of character, and yet they never quite engage us. Theoretically, the “rehearsal’’ offers some flexibility: Mistakes can happen, sequences can be stopped and restarted, and there’s lots of opportunities to improvise or modify for comic effect. But Magid uses the “rehearsal’’ as a way to bring in a second, competing story line about two of the Karamazov Brothers (Stephen Bent and Magid), who are involved in relationships with two women they’re trying to keep secret from the others. The problem is, this scenario never creates any tension and simply slows the proceedings to a crawl.

We wait expectantly to be wowed by juggling feats, and there are a few, but the show needlessly sags between them. When the Brothers decide to cut all of “the flowery incomprehensible parts’’ of Shakespeare’s text, inserting “Blah, blah, blah’’ to get through Act 5, you may find yourself wondering if they are bored by the Bard and have lost interest in their “Romeo and Juliet’’ frame.

“Flings and Eros’’ does offer some wonderful opportunities for the performers to show off their musical talent, with all four switching easily from clarinets and trombones to keyboards and percussion. Bent’s “Summary Rhymes,’’ a rapping summation of the story of “Romeo and Juliet,’’ is a highlight, along with the barbershop quartet harmonies. But despite Ettinger’s impressive high notes, the operetta sequence falls flat, and some of the rock numbers are unremarkable and stop the action in its tracks.

Earlier Karamazov shows integrated juggling routines with jokes more effectively, and while unpredictability is part of the Brothers’ charm, in “Flings and Eros’’ it feels like they are uncertain which direction to take. For a troupe dependent on precise timing, that indecision is deadly.