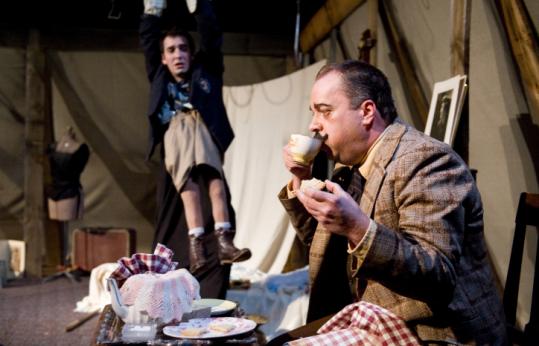 ‘Have pity on a broken and desperate soul,’’ an anguished character named Mint pleads during “The Remarkable Rooming House of Madame Le Monde.’’

But pity is in short supply - make that nonexistent - in this provocative one-act play by Tennessee Williams. Billed as a world premiere, it was performed Friday and Saturday by Beau Jest Moving Theatre at the Charlestown Working Theater.

Written near the end of the playwright’s life, “Madame Le Monde’’ represents a macabre, Grand Guignol-style iteration of a familiar Williams theme: namely, the terrible price the world often exacts from the weak and vulnerable. (One suspects the surname “Le Monde’’ reflects Williams’s penchant for symbolic names.)

In different ways, to different degrees, and for different reasons, Laura Wingfield in “A Glass Menagerie,’’ Blanche DuBois in “A Streetcar Named Desire,’’ and Brick Pollitt in “Cat on a Hot Tin Roof’’ are all locked in a kind of spiritual or emotional helplessness.

In the case of Mint, the central character of “Madame Le Monde,’’ the helplessness is all too literal.

Having lost the use of his legs, Mint (Jordan Harrison) is confined to an attic in a London boarding house whose landlady is Madame Le Monde. When we first see him, Mint is clinging to one of nearly two dozen hooks hanging from the attic ceiling. Within moments, Madame Le Monde’s son (Nick Ronan) enters, pulls Mint down from the hook, and sexually brutalizes him. (It won’t be the last time.) Then he returns Mint to the hook and leaves.

Soon enough, an old school chum of Mint’s drops by for tea. How nice! Er, no. Hall (Larry Coen) helps himself to Mint’s tea and biscuits while raining casual derision on him about his randy behavior during their days together at Scrotum-on-Swansea (a name that’s amusing the first couple of times, but Williams overdoes the joke).

Mint, stuck on the hook, beseeches Hall for a biscuit. Hall ignores him and boasts of his plans to make a killing by selling shares in a grand enterprise called “Amalgamated Incorporated.’’ Garbed like a British music-hall performer, with a Hercule Poirot mustache, Hall takes lubricious relish in detailing a story of his sexual encounter with a woman where he behaved with deliberate nastiness.

In keeping with the slightly Beckettian flavor of the play, the two men periodically speak with anticipation and apprehension of a character who is not there - the mysterious Madame Le Monde - and ruminate on when she might make an appearance.

This exercise in Waiting for Le Monde ends with her striding into the attic in red high heels in all her flame-haired glory. She ominously intones that “The world is accident-prone . . . The loss of one fool makes room for another.’’ And indeed, pretty soon the murderous Madame Le Monde (Lisa Tucker) is making room for more fools (perhaps Beckett’s tramps were lucky that Godot never showed up).

Williams always trafficked in archetypes, so when he jettisoned the last vestiges of naturalism to create the characters (or caricatures) of “Madame Le Monde’’ it was not that long a walk. But while there is some deft writing, too often Williams settled for a tossed-off glibness in this 45-minute play. Even by the standards of Grand Guignol, the ending feels arbitrary and abrupt. Overall, it lacks the meticulous attention to craft Williams was known for.

Yet there is something grimly satisfying in seeing a playwright whose best work was so thoroughly bowdlerized by Hollywood censors (think of the screen versions of “Streetcar,’’ “Cat,’’ “Suddenly Last Summer’’) deciding to just cut loose. And there are equivalent satisfactions in watching a cast that has decided to do the same. As Mint, Harrison is a loose-limbed Raggedy Andy, negotiating the role’s physical challenges with skill while making the character both pitiable and sly. Coen brings dark humor to his portrayal of the cheerfully ruthless Hall. Ronan is a walking nightmare as Madame Le Monde’s son, and as the Madame herself, Tucker grandly and lethally sweeps all before her.

But ultimately, “Madame Le Monde’’ is most interesting - and most troubling - as a window onto Williams’s psyche. Did one of the American theater’s most urgent and poetic voices really see himself at the end as Mint, victimized, immobilized, and powerless? That’s a thought as bleak as anything that happens in “The Remarkable Rooming House of Madame Le Monde.’’

Next performances Sept. 25-27 by the Provincetown Tennessee Williams Theatre Festival.