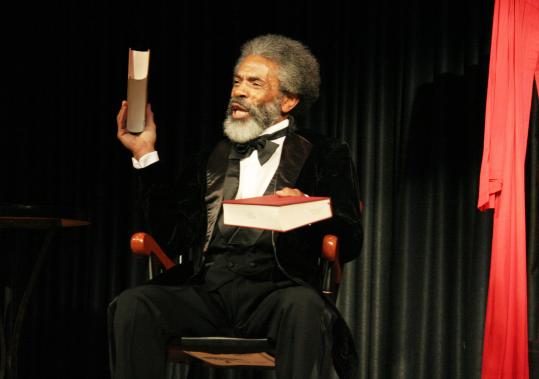 LIA CHANGAndre De Shields as Frederick Douglass, one of three roles he plays in “Mine Eyes Have Seen the Glory: From Douglass to Deliverance’’ at the Yard on Martha’s Vineyard. (Lia Chang)
By Bella English Globe Staff / September 4, 2009

Andre De Shields, the award-winning writer, actor, and singer, performs in a one-man show at the Yard on Martha’s Vineyard tonight through Labor Day. De Shields, who won an Obie in 2007 for sustained excellence in performance, was this year’s recipient of the National Black Theater Festival’s Living Legend Award. He’s 63 and lives in New York, where he has appeared in “The Wiz,’’ “The Full Monty,’’ and “Ain’t Misbehavin’ ’’ among other Broadway shows. In “Mine Eyes Have Seen the Glory: From Douglass to Deliverance,’’ which he wrote, he plays the roles of Frederick Douglass, Martin Luther King, and Barack Obama. He took a break from rehearsal this week to speak to the Globe.

Q. You’ve played Broadway a million times. Why are you playing at a small theater on the Vineyard?

A. I was here at the Yard in 2008 for the Othello Project, and not only was I impressed with the caliber of work being done here, but it’s been a long time . . . since I’ve been asked to take the kind of artistic risk that performers are being asked to take here at The Yard. It’s dedicated to stretching the envelope, living on the edge, and jumping into the abyss.

Q. What’s the risk in your new show?

A. It’s the first time in my 40-year career that I have attempted an authentically solo project. I am going to channel several political icons from American history: Frederick Douglass, Martin Luther King, and Barack Obama. The glue for the three of them is that each has revered Abraham Lincoln as the greatest American president, the Great Emancipator.

Q. Why Frederick Douglass, who is at the center of your show?

A. Because he had three seminal meetings with Abraham Lincoln, and out of those meetings came two of the most significant decisions to affect Americans. One was the writing of the Emancipation Proclamation, the other was the Civil War resolution promising slaves freedom if they would join the Union army, and that’s how the North won the war. Frederick Douglass was integral in Abraham Lincoln making those decisions.

Q. Which of the three is the hardest role to play?

A. Douglass, because Martin Luther King lived during my lifetime and he was a figure I could relate to on a personal basis, as is Barack Obama, but Douglass died during the 19th century. He embodies all of the American history that Dr. King was martyred for and that Barack Obama’s presidency is the fruit of.

Q. What do you think of the Vineyard and its historical connection to black people?

A. I thought I’d landed on the moon. There are all these middle-class to upper-class black people who don’t exist anywhere else. I mean, I’m from the ’hood in Baltimore and I grew up on the mean streets. So to come here to this very calm, very self-contained, self-assured culture of black people - I thought I’d died and gone to heaven.

Q: If you could say one thing to President Obama, what would it be?

A: I would say this: Your presidency was made possible by a grassroots breaking down of elitism in America. Therefore, it behooves you to be absolutely inclusive in your administration. That means regardless of your religious beliefs you must allow marriage to belong to anyone who desires that union.