Feeling the pop, in any guise 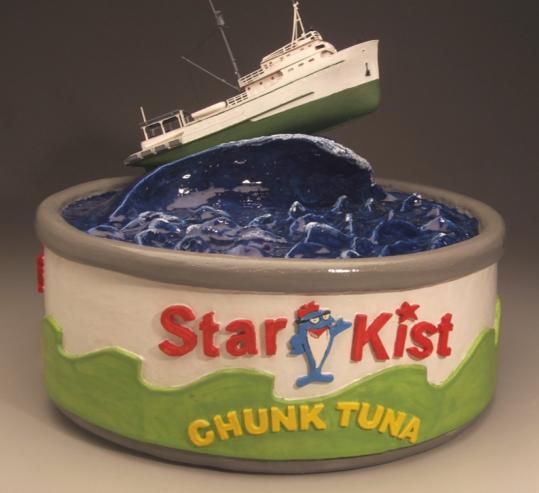 Peter Morgan’s “Tuna Can’’ and Margaux Lange’s “Bubblegum POP Neckpiece’’ on exhibit at the Society of Arts and Crafts.
By Cate McQuaid Globe Correspondent / August 26, 2009

Andy Warhol’s “32 Campbell’s Soup Cans’’ shocked the art world in 1962. Warhol had produced the paintings with a semi-mechanized silkscreen process, and his commercial subject matter spat in the eye of abstract expressionism’s soulful evocations of its artists’ ids. Back then, pop was a radical upstart. Today it’s as common as, well, Campbell’s soup.

So “POP Craft,’’ the exhibit at the Society of Arts and Crafts, is eye candy, a people-pleasing show with familiar icons from the swift, sparkling stream of American culture. There’s a challenge in putting together a show like this. Pop iconography can be archly clever without being truly smart, and craft can be the breeding ground for whimsy, and whimsy can kill art.

“POP Craft’’ largely succeeds. These artists are master technicians, and that helps to anchor their potentially helium-filled subject matter. Take Karen Shapiro’s “Good & Plenty,’’ a raku-fired ceramic, two-foot-long candy box on the wall, spilling out white and pink clay candies. There’s nothing semi-mechanized about Shapiro’s process, and the contrast of the handmade work with its mass-produced subject is satisfying. Likewise, Peter Morgan’s elegantly crafted “Tuna Can’’ is a giant ceramic tin topped with choppy water tossing a toy boat.

Joseph Cavalieri’s “The Missing Episodes’’ takes characters from “The Simpsons’’ and deposits them in stained glass mounted in light boxes. The tension between “Simpsons’’ creator Matt Groening’s irreverent style and the sacred references in the form of the stained glass is dark and achingly funny.

Not everything here is as conceptually sharp. Justin Rothshank’s clay “Michael Jackson Small Platter’’ seems to be pandering, although his “Barney Fife Medium Platter’’ has a goofy allure. Even in its weaker moments, the show has the magnetic draw of the familiar.

On perception and futility
Axiom Center for New and Experimental Media has put together its first juried show, “Pulling Back the Curtain.’’ Jurors George Fifield, director of the Boston Cyberarts Festival, and Axiom director Heidi Kayser tapped 10 artists of the 30 who submitted work. The title articulates a loose theme about layers of memory, nostalgia, and how perception is fleeting.

Much of the work is provocative, although it doesn’t really hang together in any coherent way. Megan and Murray McMillan’s five short videos stand out for their clear, poetic images and deliciously enigmatic content. In “A Slight Shift of Gravity,’’ they split the screen: On the left, the inverted image of a man lying facedown on a three-dimensional topographical map; on the right, a man standing on a jetty. The man under the map suggests that gravity has indeed shifted, while the man on the jetty, surrounded by water, conjures the rising tides of climate change.

Henry Gwiazda’s haunting videos of animated cityscapes check in with the same two characters, at different intervals. It’s like looking at a living map, and guessing stories and relationships from the movements of traffic, people, and weather patterns. Jessica Westbrook’s digital video “Product Placements’’ has a fevered beauty, focusing on sparkling, crushed trash floating through overly pretty landscapes.

Alison Safford’s purposely frustrating “Futility Toy (for g.j.)’’ features clay troughs laid on the floor; wheels attached to gears on the wall slowly move back and forth through the troughs, as if digging them deeper. Futility also arises in Joseph Farbrook’s “Flying in 2008,’’ a video shot from the window of a grounded airplane, mounted in an actual airplane window. Farbrook invites us to see the action outside as a performance, as an antidote to the frustration of waiting.

The reach of youth
While the owner has vacated for the month, LaMontagne Gallery’s art preparator Aaron M. Segal has taken over the space to stage “Beg Borrow Steal: An Unauthorized Use of the LaMontagne Gallery,’’ a sprawling show of 28 young artists who recycle or cannibalize resources. Young artists have been doing that forever, and it’s often hard to tell, looking at the work, what element was appropriated.

Still, it’s a lively exhibit, gritty although sometimes overreaching. The paintings, in particular, stand out. Vanessa Irzyk’s “Bodacious’’ shows a voluptuous woman in a black bra. Her hair and bra are tonally flat, but her skin is beautifully modulated, and the contrast works. Brian Willmont’s gouache “Mars Landing’’ shimmers in unearthly tones, as a green single-engine plane lands on the steamy yellow ground. Lily Morris’s “Sea Monster’’ marries an atmospheric combustibility reminiscent of a J.M.W. Turner painting with a huge, insect-like creature straight out of a B-movie.

There’s more, but the pleasure of an exhibit of young artists is in happening on the ones whose work you hope to see again.

POP CRAFT At: Society of Arts and Crafts, 175 Newbury St.,

PULLING BACK THE CURTAIN At: Axiom Center for New

BEG BORROW STEAL: An Unauthorized Use of the LaMontagne Gallery