Taking a new look at this old house 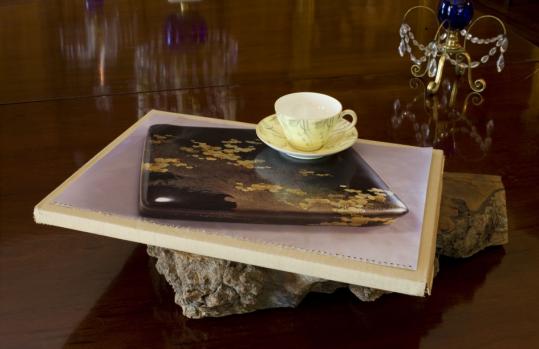 Every summer when I was growing up, my parents would drag the family to a historic mansion for an afternoon of edification. It seemed that time had stopped in these places, with their plush carpets, velvet ropes, and winged chairs I was forbidden to sit in. There was nothing I could see to connect all the polished tables and portraits of dead people to my life, to the here and now.

“Art + History,’’ an exhibition of work by photographer Carla Herrera-Prats and sculptor Jill Slosburg-Ackerman puts a refreshingly contemporary spin on the Nightingale-Brown House, a National Historic Landmark in Providence that houses the John Nicholas Brown Center for Public Humanities and Cultural Heritage at Brown University. The exhibit, put together by Meg Rotzel and Rosemary Branson Gill, works beautifully in part because historic homes tell the complex stories of their inhabitants through images and objects, the currency of visual artists.

There’s a lot to digest. Stylistically, the house, built for Joseph Nightingale in 1792, has been added to over the years with 19th-century neoclassical and early 20th-century neocolonial touches. Five generations of the Brown family lived here, against the historical background of slavery, imperialism, and trade. Slosburg-Ackerman’s objects, all titled “Import-Export,’’ touch on these without pulling us too deeply into any.

“Import-Export teacup’’ is a delicate Wedgwood piece sitting primly on a sheet from a Japan Airlines calendar depicting an antique, inlaid box, which in turn sits on a mailing box balanced on an old, unfinished chunk of maple on the dining room table. The maple nods to all the wood in the house; it’s a source. The teacup signifies class, and the calendar page denotes the magnetism of the Far East. Both tie into the Browns’ remarkable collection of Canton china, possibly imported on the family’s merchant vessels.

“Import-Export side table (duplicate),’’ a found table from which the sculptor has gouged much of the finish, is a shock to see next to an elegant armchair on an oriental carpet. It looks as if a beaver has had at it, and suggests that the stories of the past can be pared down as much as they are embellished.

Herrera-Prats looked at photographic family portraits, tracked down the addresses of the studios where they were made, and took photos of the sites today. One or two are still photo studios. Others have moved or disappeared. Portraiture, she points out, has been democratized. You no longer need to cart the whole family into New York to sit for a portrait.

Like all historic houses, the Nightingale-Brown House is a treasure trove. Both artists in this show alight on tiny bits of what it has to offer, and show poignantly that history is a fluid, living thing, as changeable as the present.

Whitakers’ watercolors
“Translucent Visions: Frederic Whitaker and Eileen Monaghan Whitaker - A Retrospective in Watercolor’’ at the President’s Gallery at Massachusetts College of Art and Design offers the work of a pair of 20th-century married artists who became well known in their later lives - after retiring from successful careers in design - as accomplished watercolorists.

Both Whitakers had technical chops, but they weren’t especially adventurous artists. It’s easy to admire the tones and deft brushwork of pieces such as Frederic’s “Houses on a Hillside’’ (1958) and “Beach at Caparica’’ (1968), but there’s a studied, postcard-like composition to them. I prefer it when he lets go - watercolor is a medium that requires letting go - as he does in the wild, sprawling, dark branches of “Sycamores No. 3’’ (1972).

Eileen, a Mass Art grad, offers some able portraits and an overly gauzy “A Blue Mood’’ (1962), depicting a dour woman swathed in blue. Still, she has her moments, as in the fierce “Piscis Faustinius (Charlie Faust’s Flying Fish)’’ (1982), a nasty-looking creature with bared fangs and nails along his head. The breakout pieces in the show seem to reveal something of the artists. Unfortunately, most of the work does not.

Vietnam under the sea
Japanese born Jun Nguyen-Hatsushiba lives in Vietnam, where he shot his video “Memorial Project Nha Trang, Vietnam: Towards the Complex - For the Courageous, the Curious, and the Cowards’’ now on view at MIT List Visual Art Center’s Media Test Wall. It’s a haunting, dreamlike, and beautiful 13-minute piece, shot largely underwater in the sea off Vietnam.

The artist staged an underwater rickshaw race. Working in pairs, teams move the rickshaws over the rock-strewn sea floor, darting up to the surface to gulp air. It’s a mythic journey, ending at an underwater tent city, a metaphorical memorial to refugees who drowned trying to escape by boat after the Vietnam War. It’s also a rebuke to the current Vietnamese government for banning production of the rickshaws, which provide green transportation and a source of income for many. The sea becomes a stage for past and passing ways of life.

JUN NGUYEN-HATSUSHIBA: Memorial Project Nha Trang, Vietnam: Towards the Complex - For the Courageous, the Curious, and the Cowards