Exhibits bring reality in - and out - of focus 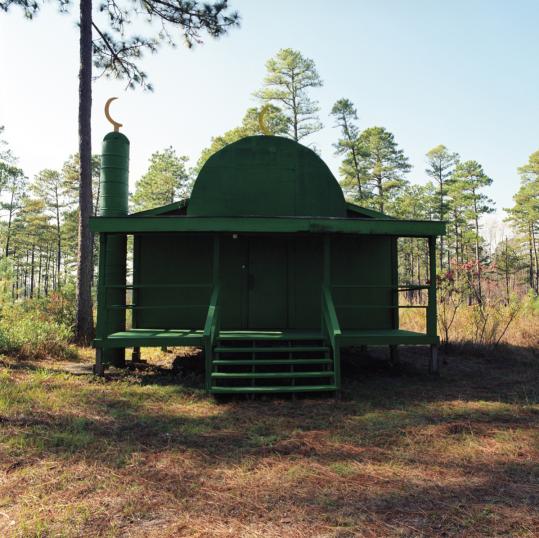 Christopher Sims’s “Mosque’’ (above) and Dana Fritz’s “Condiments, Lied Jungle’’ (below), both on display at the Griffin Museum, are real images with the feel of illusion.
By Mark Feeney Globe Staff / August 15, 2009

WINCHESTER - Photography straddles a paradox. A photograph, a reduction of three dimensions into two, is blatant artifice. Yet thanks to its sheer documentary persuasiveness, not to mention more than a century and a half of visual conventions, we can’t help but see a photograph as inherently realistic. Inherently realistic? It’s irresistibly realistic. Photography, you might say, is seeing our cake and believing it, too.

Two of the four shows currently running at the Griffin Museum of Photography through Aug. 30 arrestingly exploit this interplay between reality and artifice.

Christopher Sims’s “Home Fronts: The Pretend Villages of Talatha and Braggistan’’ consists of nine photographs he took in 2005 and 2006 of Iraqi and Afghan villages. The twist is that the villages are training facilities built by the military on bases in the United States (that’s Braggistan as in Fort Bragg).

Sims’s images succeed on three levels. They’re reportage, affording a glimpse of a little-known, and startling, aspect of US military training. They work simply as images, irrespective of their informational content. And, being photo graphs, and thus illusory, they pull off the neat trick of being illusions about illusion.

In “Terraria Gigantica: The World Under Glass,’’ Dana Fritz looks at a different way of re-creating reality. She offers six photographs of such sites as Biosphere 2, in Tucson, and the Eden Project, in England. Seeing salt and pepper shakers and mustard and ketchup squeeze bottles on a table with a bit of lush rain forest in the background, in “Condiments, Lied Jungle,’’ has a topsy-turviness that’s almost as incongruous as the half-hearted attempt at eco-camouflage in “Green Ductwork.’’

Both Sims and Fritz were among the 400 applicants who submitted work for the Griffin’s annual juried exhibition. Forty-six photographers were selected for inclusion. It’s hard to generalize about so large and no doubt unrepresentative a group. This is a competition, not a survey. Still, a few patterns emerge. Almost all of the images are straight rather than manipulated. Most are in color, and nearly as many are large.

Expect to see a few kids and a couple of polar bears. The most common subjects are architectural: facades and interiors. Fine examples of each would be Eve Morgenstern’s “Abandoned House; Oakland, CA,’’ with its vaguely Egglestonian air, and Matthew Gamber’s sun-splashed “Living Room.’’ An even more inviting interior can be found in Bahar Yurukoglu’s “Martin Van Buren had red hair.’’ The cake visible on a marble sideboard looks delicious, but not as delicious as the title.

Arthur Griffin, a Boston photojournalist and the museum’s namesake, took numerous photographs of Ted Williams. Ten Williams or Williams-related photographs make up “Ted Williams: The Splendid Splinter.’’ Several show the fabled ballplayer just starting out with the Red Sox, back when he really did seem splinter-thin. Williams looks alternately haunted, boyish, and feral. Whoever would have thought that this gangly guy would be the last man to hit .400 - or even lend his name to a tunnel under Boston Harbor?