The art of the deal 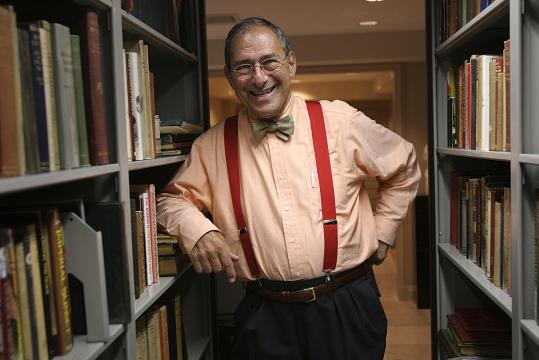 “I saw this painting in New York and fell in love with it,’’ says Fred Sharf, standing in front of a work depicting two young Japanese women in a sailboat.

For Sharf, it was a small step to make sure the Museum of Fine Arts knew about Miki Suizan’s “Fair Wind’’ (1933), an 8-by-6-foot painting in delicate blues, yellows, and reds on a silk backdrop. On Sharf’s advice, the MFA bought the painting, and today it hangs in the museum’s Japanese gallery. It is part of a show up through Nov. 8 called “Showa Sophistication: Japan in the 1930s.’’

Sharf isn’t just an enthusiastic fan of the exhibition. He curated it, a practice so unheard of for a trustee at a major museum that the MFA can’t say if a board member has ever served in that role before. But Sharf is no typical trustee. The multimillionare owner of a sports marketing company has also written or co-written at least 40 art books and exhibition catalogs for a range of institutions, including five for the MFA.

“My passion is research,’’ says Sharf. “I love to buy things, and then I like to research what it is I bought. Very often that puts me in a position where I know more than anybody else knows about some of this stuff. Whether that is usual is something I don’t know.’’

Sharf, who turns 75 later this month, walks fast, darts from appointment to appointment in his black Mercedes, and says what’s on his mind, not afraid to pepper an anecdote with profanity.

He has given generously to the museum over the years: 2,700 works and counting. He and his wife, Jean, have donated $5 million to $10 million worth of money and art to the MFA. But behind the scenes, Sharf is also perhaps the biggest deal-maker in Boston’s art world. When he speaks with collector friends outside Boston, he’ll talk up the MFA and let them know it would be the best place for their works. When he believes a show needs to be commemorated with a catalog, he pays for it.

Earlier his year, he helped the MFA acquire more than 100 dresses by Arnold Scaasi, meeting with the legendary designer down in Palm Beach.

And Sharf makes sure his own favorite works can be seen. Right now, art that he has curated, bought, or helped acquire is on view in four local shows - at the MFA, Brigham and Women’s Hospital, Children’s Hospital, and Larz Anderson Auto Museum in Brookline.

But the bulk of Sharf’s attention is always focused on Huntington Avenue.

“Fred is the best salesman I’ve ever met for anything, especially the MFA,’’ says Leonard Lauder, the cosmetic company scion who serves as chairman of the Whitney Museum of American Art. In 2002, Lauder gave the MFA 20,000 Japanese postcards.

“When it comes to passion,’’ Lauder says, “there’s no one who has passion quite like Fred.’’

Celebrating the obscure
The boxes are always arriving at the sprawling, contemporary one-story house in Chestnut Hill that the Sharfs have called home since 1978. Inside, you’ll find, among other things, foot-long models of concept cars from Detroit’s golden era, a cache of fashion-magazine drawings from the 1920s to 1980s, Japanese prints, and hundreds of books.

Sharf doesn’t line his hallways with Rodin sculptures. He prefers to collect art that historians have largely ignored. In some cases, his buys have never been written about. Until he came along.

“Some collectors are only interested in whether it’s a pretty picture,’’ says Anne Morse, the MFA’s senior curator of Japanese Art. “Fred is not one of those.’’

When Sharf was a kid growing up in Chestnut Hill, his mother would take him around to thrift shops to make his first purchases. He bought his first painting, a landscape, for $11 at an antique store in Ipswich around 1945. He continued buying while at Harvard in the ’50s and during the early years of his marriage to Jean. When the young couple moved to New York City in the ’60s, Sharf remembers telling his wife, “You’ve got the apartment, but the walls are mine.’’

He started with art he liked but could also afford: architectural drawings.

Later, Sharf became wealthy thanks to real estate investments in the ’60s and his family’s sports equipment company, which he transformed into a sports marketing firm. (Most of his high-profile clients - former Bruins Phil Esposito and Ken Hodge, for example - have moved on, but he continues to represent tennis analysts Bud Collins and Mary Carillo.)

Even though he has money, Sharf continues to take pride in finding something special that others needed help appreciating.

“Another example of a field nobody wants,’’ Sharf will say when describing his now large collections of car and fashion drawings.

Sharf’s interest in Japanese work has evolved over time. He first collected woodblock prints and photographs from the Meiji period, from 1868 to 1912. The work was underappreciated at the time and therefore a great collecting opportunity. All of that collection is now at the MFA. After that, Sharf focused on Japan in the 1930s, collecting photos and books with which he could do research. That led to “Showa Sophistication.’’

Does he find it all strange that he’s curating an MFA show? No, he says.

“With the Japan exhibition, I have a knowledge of Japan in the 1930s that nobody else had,’’ he says. “I was able to look at those paintings and say, ‘I understand why the Japanese were interested in skiing. They were interested in developing ski resorts. They have mountains, and they wanted to host the 1940 Olympics.’ Nobody in the museum had that sense of what Japan in the 1930s was all about.’’

Museum leaders say they have appreciated Sharf’s support. He’s not pushy and is always willing to take no for an answer, they say.

Sharf does take pride in being able to act quickly.

Take the case of the exhibition at the Larz Anderson Auto Museum. The museum’s director called him on March 10. By May 10, Sharf had selected and sent over an array of his car-design prints for the show. By July 10, he had written and printed a catalog.

Other selections from his car-design collection have been seen in Boston-area hospitals and in Japan at a show organized by .

Sharf can buy objects on a moment’s notice, and decide later whether they’ll fit into his collection.

“He makes a collection,’’ she says, “and then gives it away. He’s very project oriented. He’s come home at night after being out and starts typing away.’’

In a way, their house is just a way station as Sharf determines what to pass on to the MFA. The aggressive collecting began to make even more sense after the museum in 2007 acquired an adjacent building from the Forsythe Institute, a 100,000-square foot space eventually intended to serve as a study center, where visitors will be able to look through drawings and prints kept by the MFA.

“The kind of archives, the kind of materials he’s looking for are naturally going to be a key part of the collection,’’ says MFA director Malcolm Rogers.

Projects big and small
Rogers and Sharf meet in Chestnut Hill a couple of times a month. They usually start with a glass of malt whiskey and then head downstairs to examine the latest arrivals. Sharf was a donor to the museum before Rogers arrived in 1995, but his relationship with the MFA has intensified since that time.

The importance of that relationship was underscored last year, when the MFA’s new visitor center was named after the Sharfs. But the couple don’t just help with big-ticket items. They also support smaller projects that bring little recognition. When the MFA wanted to illuminate the museum in pink lights for Breast Cancer Awareness Day, for example, Sharf ponied up $5,000 to make it happen.

On a recent weekday, Sharf’s skills as a broker were on display as he sat at a table inside the MFA’s Asian art department with Morse, the curator.

They discussed a collection of Japanese kimonos belonging to a collector Sharf knows. The collector wants to have a book created about his collection, and the MFA is considering adding some of the kimonos to the museum’s holdings. Sharf is contemplating paying for the book if an agreement is reached.

Beyond the books and catalogs he’s written himself, Sharf previously underwrote a book by MFA curator of American decorative arts and sculpture Nonie Gadsden.

No other MFA trustee has curated and written books for the museum. Museum ethicists, though, say it’s perfectly fine as long as Sharf doesn’t plan to later sell any of the works shown at the MFA. For “Showa Sophistication,’’ the MFA already owns all 20 objects on display, one of which was given by Sharf.

“What makes this different is that this man has done tremendous scholarship,’’ says Marie Malaro, former head of the George Washington University museum studies department and author of the book “Museum Governance: Mission, Ethics, Policy.’’ “He’s getting nothing for it.’’

Creative force
So, why Japan?

Sharf used to travel there for business. Looking for art made the trips more interesting. He decided the 20th century was a great, underappreciated time for Japanese art. He appreciated it.

He still travels there regularly. As part of his research for the “Showa’’ exhibition, he brought Morse to Japan last year, paying her expenses because the MFA couldn’t afford to and putting her up at the Imperial Hotel in Tokyo. That’s where he stays when he’s in Japan, in room 1005. (It provides a great view of the Imperial Tower.) He’s also hired Masaru Shima, a former MFA researcher now living in Tokyo, to help with research as he works on a “Showa’’ book.

“There are so many projects that wouldn’t have happened without Fred,’’ says Morse. “He’s very much an enabler. If he believes something should be presented, he makes sure we have the resources to do that.’’

Sharf also has touched the museum in unexpected ways. Susan Kaplan, a trustee on the museum’s collections committee, said that he served as an inspiration in her own campaign to establish one of her passions - jewelry - as a legitimate area of study.

Three years ago, Kaplan endowed a curator of jewelry post at the MFA, making it the first at any art museum.

When asked what she was thinking when she pushed for the new position, Kaplan didn’t hesitate. “I was thinking of Fred,’’ she said.