THIS STORY HAS BEEN FORMATTED FOR EASY PRINTING
Design Review

California Arts and Crafts, by way of Boston 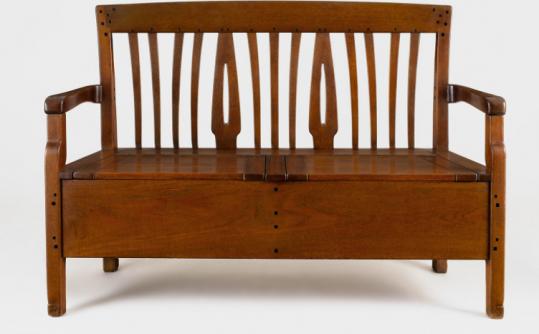 It’s hard to imagine that anyone could spurn the sumptuous craftsmanship of California architects and designers Greene & Greene, but after their heyday in the early 1900s, they not only dropped out of favor; they nearly fell off the map.

The brothers faded into obscurity partly because so many copied their distinctly Californian take on the American Arts and Crafts style that their work was lost in a sea of likenesses, and partly because Modernism stormed in with its boxes made of steel and glass, shouting down the warm romanticism of its predecessors. By 1947, pieces from one of Greene & Greene’s masterpieces, the Robert R. Blacker House in Pasadena, were sold off at a yard sale.

Their resurrection began five years later with an award from the American Institute of Architects, and it has continued. “A ‘New and Native’ Beauty: The Art and Craft of Greene & Greene,’’ a honey of an exhibition organized by the Gamble House, University of Southern California, and the Huntington Library, Art Collections, and Botanical Gardens, has come to the Museum of Fine Arts. The Gamble House is the only Greene & Greene house that has been preserved and is open to the public. The pieces on view - mostly furniture, glass, and metalwork - are so smartly made, with such gorgeous surfaces, it’s a pleasure just to be in their presence.

The Greenes, like their contemporary Frank Lloyd Wright, didn’t merely design houses. They designed whole environments, fitting their buildings into the landscape and outfitting them with everything from furniture to stained glass to downspouts, all meticulously handcrafted.

Raised in the Midwest but descended from Boston-area shipwrights and architects, the brothers enrolled at MIT in 1888. It was located in Copley Square then, as was the MFA. Henry Hobson Richardson’s Trinity Church had recently been built, with its Arts and Crafts interior, and McKim, Mead and White’s Boston Public Library was on its way up. After graduating, the Greenes apprenticed with local architects, all acolytes of Richardson. Japonism, a passion for all things Japanese, was at a fever pitch in Boston, and the young architects almost certainly took in the burgeoning Japanese collection at the MFA. Here, the seeds for their aesthetic were planted.

Nonie Gadsden, curator of decorative arts and sculpture at the museum, has appended a lively Boston chapter to the traveling show, including display cases of Japanese ceramics and “tsubas,’’ or sword guards, replicating exhibits from the early 1890s. To today’s eye, the displays look comically crowded. Don’t miss the tsubas: Their rounded, belt-buckle form became one of Charles Greene’s favorite motifs. It’s a touchstone throughout the exhibit, inlaid into furniture.

Charles was the artist and visionary, Henry the engineer and businessman. When the stock market crashed in 1893, the two left Boston for Pasadena, where their parents had recently moved, and put up a shingle. They spent their first decade there getting their footing as craftsmen and businessmen. An early table Charles made for his fiancee in 1899 is stocky and serviceable, with a few too many nail heads dotting the tabletop. The simple, sturdy furniture of Gustav Stickley was his first and continued inspiration. By 1905, an ash fall-front desk built for the Adelaide A. Tichenor House integrated themes from Stickley and from Asian design.

Part of the Greenes’ genius was their talent for finding talented craftsmen. In 1906, they began working with Swedes Peter and John Hall, who made the teak and ebony entry-hall bench for the Blacker House with distinctly Chinese horse-hoof feet. The Halls’ work is notable for its snug joinery, decorations, adaptability to weather, and lush finishes. Ebony pegs capping sunk screws became a Greene & Greene trademark, and elaborate, asymmetrical wood and metal inlays recalling Japanese design adorn many pieces.

In a museum, it’s impossible to conjure the presence of a Greene & Greene house. Over the years, the brothers’ Arts-and-Crafts aesthetic took on adaptations for comfort in Southern California’s sunny climate. They drew on Mexican haciendas, Japanese temples, and other sources. Long overhanging eaves provided shade. Sleeping porches and large windows integrated outdoors and indoors. The exhibit includes several plans for Greene & Greene projects, archival photos, and present-day video footage of some of the homes.

Even so, the exhibit design goes a long way to re-creating the feel of a Greene & Greene house, with several “rooms’’ that illustrate how the brothers would create, in a home, something akin to a symphony, with each room a different movement, all in concert with the surrounding landscape.

A 1912 living room table for the Charles M. Pratt House in Ojai cries out to be touched. (Don’t do it! An alarm will sound.) The Greenes had instructed the Halls to orient the wood grain of different cuts in opposing directions, forming a “fiddle-back’’ design on the mahogany surface. A silver inlay wave on the drawer handle echoes the mahogany’s grain. The wave appeared throughout the Pratts’ living room.

The exhibit presents metalwork, light fixtures, and stained glass as well, each evolving in style and complexity through the years. The entry-hall stained glass window panel for the Jennie A. Reeve House (an earlier effort, built in 1904) has at its center a landscape featuring tall, ill-defined red flowers and lumps of hills in the distance. The more subtle bedroom window in the Tichenor house is awash in shifting ambers and greens, written over with a calligraphic line portraying a flock of birds against the sunset. A video projection re-creates the iridescent glass in the Blacker House, which changes color according to how the light hits it.

The Greenes balanced on the brink of Modernism. Despite their emphasis on the handcrafted, they made use of new technologies, participated in a growing globalism, and availed themselves of the new and ready accessibility of materials from around the world. Their clerestory windows, overhangs, and high kitchen cabinets all heralded modern architecture. In 1947, the same year the Blacker House contents were sold off in a yard sale, critic Lewis Mumford saw modern California houses in the spirit of Greene & Greene as a “native and humane form of modernism,’’ according to a catalog essay by Edward R. Bosley.

The brothers parted ways in 1916, and their individual projects never measured up to their collaborative efforts. But they outlived their own obsolescence. Henry died in 1954, two years after the AIA honor. Charles died in 1957.