His mosaics go beyond the bath 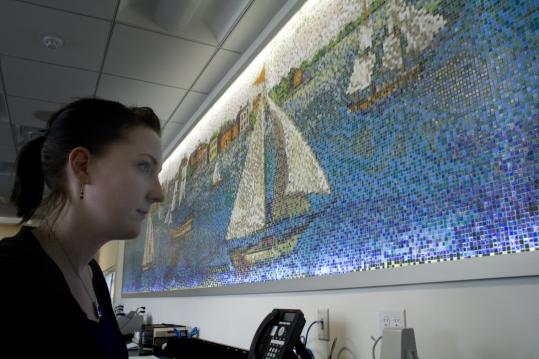 On a recent morning, against a backdrop of squawking seagulls, Artaic founder and CEO Ted Acworth guides a visitor through the company’s Fort Point offices, his energy level undiminished by the previous evening’s 10:30 p.m. knock-off time. Meanwhile, in a back room, a robot is already hard at work, methodically assembling thousands of tiny marble tiles to create an arresting three-story image of a sailboat.

It’s a glimpse into the city’s most recent marriage of art and technology - and if Acworth has his way, it’s a relationship that will revolutionize the way people think about mosaic.

“I always knew I wanted to find something to combine hardcore technology with something very creative,’’ said Acworth, 40, a former NASA engineer and onetime director of research at the Cambridge-MIT Institute. “I always had a real inclination toward building things and solving real-world problems.’’

So how did a rocket scientist become obsessed with mosaic tiles, something most people never give much thought to unless they’re installing a kitchen backsplash or a bathroom floor?

The Long Island native’s passion for the millennia-old art form was first kindled after a visit to an exhibit of Roman mosaics at the Museo Arqueológico Nacional in Madrid when he was still in college.

“I went in and walked through and saw these things and was completely blown away by the beauty and the level of the art,’’ Acworth recalled. “It’s tangible, it’s durable, it’s physical - as a mechanical engineer, it’s the kind of art form you might like.’’

Years later, while building a vacation home in Lake Placid, N.Y., Acworth and his wife, Matti, considered installing a mosaic in their foyer. It was then that Acworth realized the limits of the medium.

“I realized firsthand how long it takes, how expensive it is, and what a complicated process it is,’’ said Acworth. “So we didn’t do it. But that’s when I realized there might be a market here.’’

In June 2007, after earning an MBA from the MIT Sloan School of Management, Acworth launched Artaic, with a mission “to make beautiful, custom mosaic accessible.’’

Typically constructed of tiles, or tesserae, the size of a fingernail, mosaic is singularly labor-intensive. One square foot of mosaic paneling requires about two hours of manual assemblage. To execute his plan, then, Acworth knew the challenge would be to compress the labor to reduce time and cost.

Acworth, who also has a PhD from Stanford, came up with a solution. A robot - specifically, a “pick and place’’ robotic system, similar to those used in industrial plants, that could position mosaic tiles about 10 times faster than the human hand.

“I considered simpler mechanical systems, but I soon realized that using a robot was, all in all, the right choice,’’ said the Beacon Hill resident, who commissioned a company in Westfield to build the device.

With the help of Artaic’s creative director Paul Reiss, Acworth then designed an original software program that could take any image - a photograph, an oil painting, an original graphic design - and reconceive it in mosaic form with pointillistic precision.

“It’s customized - it’s not out of a catalog,’’ said Acworth.

The duo immersed themselves in the world of tile, sourcing high-end glass, marble, and porcelain tesserae as well as unusual materials like leather and coconut shell.

Acworth bankrolled some of Artaic’s costs through the unlikeliest of sources: the History Channel, which in early 2007 recruited the scuba-diving scientist for a new show called “UFO Hunters.’’ Over 26 episodes, “Dr. Ted’’ and two fellow scientists investigated purported UFO sightings around the globe.

“I’m not a believer, but I am trained as a scientist, and I like to explore interesting questions,’’ Acworth said. His 15 minutes of fame ended up boosting business: “We’ll go to sales meetings with a client and they’ll go, ‘You’re Dr. Ted!’ It opens doors.’’ Acworth bowed out after the second season, wanting to spend more time with his son E.J., now 18 months old.

Artaic began taking commissions in early summer 2008. One of the company’s first commercial projects was a wall-sized mosaic for Salem Five Bank in Reading based on a painting of Salem Harbor.

“It’s pretty spectacular,’’ said Janis Dodge, senior vice president of consumer banking, who commissioned the piece. “It really pops.’’ Artaic has since taken on both commercial and residential commissions, creating everything from customized kitchen backsplashes to a decorative mosaic for an in-ground swimming pool.

To those who might accuse Artaic of automating, and thus corrupting, a creative process, Acworth is firm is his response.

“It couldn’t be further from the truth,’’ he said, adding that local mosaicists have toured the space and voiced their approval. “We’re just a complement and creating a bigger market space.’’