THIS STORY HAS BEEN FORMATTED FOR EASY PRINTING
Opera review 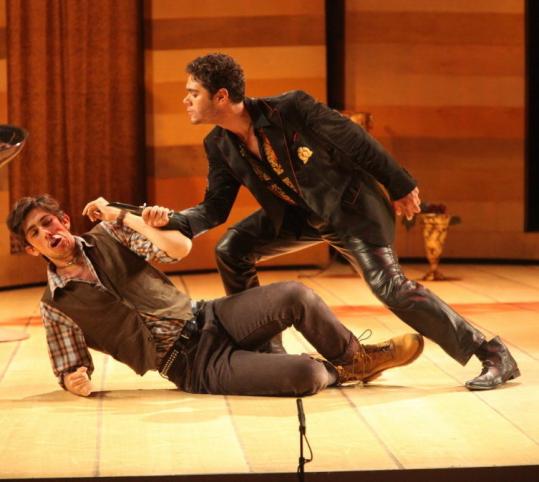 LENOX - A fine evening doesn’t normally end with a trip to hell; nonetheless, the Tanglewood Music Center’s “Don Giovanni’’ is, indeed, a fine evening. Mozart’s operatic portrait of the infamous roué and his sulfurous requital has been given a sparkling new production, with conductor James Levine in the Tanglewood Theatre pit, some excellent singing onstage, and the plot’s comic seriousness and serious comedy deftly rekindled.

“Don Giovanni’’ can engender all manner of psychology, but director Ira Siff kept the emotions streamlined: less novelistic complexity, but higher-stakes drama. (This Don was no misunderstood Romantic antihero, but a pure, potent villain.) Siff’s staging - similarly taut, the action’s geometry clear, comic business efficiently deployed - made superb use of Eduardo Sicangco’s ingenious set, stylized architecture rendered in neutral, light woods. The time frame is all over the place: the aristocratic Donna Anna and Don Ottavio in 19th-century Restoration dress, Zerlina and Masetto in 1950s prom wear, Don Giovanni a smooth criminal in fedora, jacket, and leather jeans, the stage band at his ball thoroughly punked out. But none of it jarred.

Layla Claire, as the grief-addicted Donna Anna, sang with limpid, steely sound and gripping commitment, while as her betrothed Don Ottavio, Mark Van Arsdale showed a svelte tenor and fine musicality; their dynamic, a co-dependency of ostentatious inaction, was appropriately melodramatic. Elizabeth Reiter was a superb Zerlina, the voice rich and silvery, the character a feisty flirt. Masetto, too, was smarter than the average peasant; Michael Weyandt, his baritone bright and clean, captured his awareness of both the situation and his powerlessness to change it.

Guest artist Morris Robinson unleashed his mighty bass to riveting effect as the Commendatore and his statue, come to life to wreak his revenge on the Don. Devon Guthrie played monomania right as the jilted Donna Elvira, not frantically diffuse, but desperately resisting her perpetual unraveling; she contrasted sharp-edged phrasing with a satiny tone.

Elliot Madore brought athletic energy and narcissism to the title role, a Don with one eye always on himself, his dark baritone shading his menacing edge. And as Leporello, Evan Hughes combined crisp vocal clarity and adept physical comedy into a scene-stealing everyman - an audience stand-in skeptic, cynical, but still seduced by iniquity. (A deputation from the Tanglewood Festival Chorus handled the brief chorus parts.)

Incorporation of almost all of Mozart’s later additions made for a lot of music (and some evident vocal fatigue as the second act went on), but the evening felt short. Levine’s pacing was fleet, the student orchestra lithe; in places, one might have wished for more nuanced lushness, but the lean tone insured good balance in the Tanglewood Theatre’s close-up acoustics. All around, this was a production that made a virtue of polished perspicuity, the arc of the parable lucid and inevitable. For once, industrious hands were the devil’s tools.