He’s at the wheel 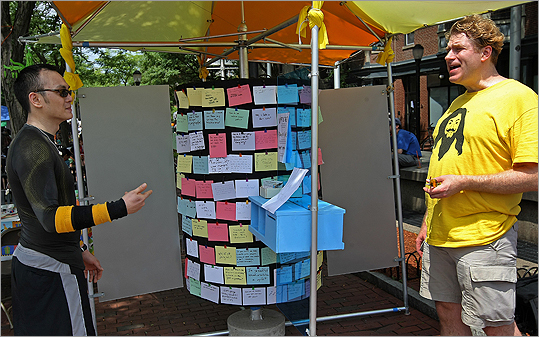 SOMERVILLE - Watching the slow surge of morning traffic through Davis Square, Johnny Monsarrat leans back on a park bench and smiles.

“It’s easy to believe, just looking around, that these are all well-adjusted people who are perfectly happy, you know?’’ he says. “But most people have problems. No one should be embarrassed about that, or afraid to ask for help.’’

Monsarrat knows firsthand that big questions can be tough to tackle alone. He is 40 years old and has been divorced twice. He once weighed 327 pounds. After years of stumbling through onerous jobs and soured romances - armed with an airy optimism that things would ultimately fix themselves - he decided to take a new approach. Now, touring the Boston area with his public art installation “Wheel Questions,’’ he has become a self-appointed answer man, dispensing pithy insights on bright notecards tacked to a revolving cylinder that he calls “the Wheel.’’

Monsarrat’s question wheel, which has appeared at local arts festivals and is now stationed in Davis Square, features fluttering scraps with scrawled questions submitted by anonymous members of the community. The questions range from the lighthearted (“Why isn’t there an island called Monster Island?’’ “Why does Timmy smell like women’s perfume?’’) to the sobering (“Should I have the baby?’’ “Will I be alone forever?’’).

On the back of each notecard, Monsarrat pens a personalized response meant to inspire people, he says, “to stop waiting and change their lives.’’

“Oh, look at this one,’’ he says, flipping through a fresh stack of questions. “ ‘I’m about to lose the love of my life. What should I do?’ That’s a tough one.’’

Monsarrat has replied to more than 7,000 questions so far, and he estimates that number will be more than 20,000 by the time the wheel stops touring in October. (He is currently receiv ing an average of 200 questions a day.) If he can find funding for the installation, which he now pays for out of pocket, he plans to expand it into a larger wheel manned by several people and perhaps even make it into a book. Meanwhile he’s aiming for a world record in the number of questions answered by one person, since no such record has previously been set.

A tall man with a mop of blond hair and impeccable posture, Monsarrat speaks precisely and briskly. “A lot of times, my heart has misled me,’’ he says. “So now I try to use rational thought to veto my heart.’’

Growing up in Rehoboth, Monsarrat found himself itching for more activity than the nearby sprawl of forest and lakes could offer him. He occupied himself by trying to make the world’s biggest maze on mural paper. He started a Dungeon and Dragons club at school. “I was always a computer boy, a project boy,’’ he says.

He enrolled at MIT, which he thought seemed like the logical place for a self-proclaimed geek to carve out his niche. He joined 12 clubs and became the school mascot - the MIT Beaver. “I didn’t sleep much,’’ he recalls. “I think part of it comes from a desperation not to waste any of my life.’’

Then he headed to Brown, but dropped out before he got his PhD in computer science in order to found the computer-games company Turbine Inc. By 1997, Monsarrat was severely overweight because of bad eating and exercise habits, and profoundly unhappy. When he hired a new CEO of Turbine, he suddenly had time to think. So he decided to stop waiting for his life to change on its own. He ended a troubled relationship. He sought nutritional help and eventually shed 125 pounds. And suddenly, he says, everything felt simpler.

“Now when I answer questions, I try to think, what’s the rational way of bringing information in and then making a choice that will lead to actual happiness,’’ he says, “instead of delusional happiness?’’

One notecard asks “Are horoscopes true?’’ Monsarrat’s response: “They’re completely false. The reason they seem true is because they’re so vague.’’

“Will I ever find someone who loves me?’’ asks another. Monsarrat: “Yes, but it helps if you can shed your baggage. Confidence is attractive.’’

Trained in the computational arts of algorithms and formulas, Monsarrat approaches questions practically and directly. He likes to address cosmic issues of love and life by whittling them down to empirical elements: Why do you feel this way? What can you do to change it?

“I think that people know certain things. They know how to look for a job, how to apply to college,’’ he says. “But when it comes to things like love and family, people tend to just wait and see. I prefer to make it a more active project.’’

Monsarrat says that the social awkwardness of his high school years forced him to learn people skills using the same focused thinking that he used to write computer code and solve math problems. “I used to think, why can’t I solve this human problem?’’ he says. “Maybe I pay more attention now because I was such a goof in the early days.’’

One of Monsarrat’s earliest influences was PostSecret, the community art project created by Frank Warren that collects homemade postcards featuring personal secrets. But PostSecret is one-sided, Monsarrat notes. “It’s not uplifting,’’ he says, “because there are no answers.’’

The first incarnation of Monsarrat’s wheel was born in the backyard of his Somerville home last year. “I wanted to spread my philosophy in a way that was interactive,’’ he explains. The interactivity of “Wheel Questions’’ taps into both people’s voyeuristic nosiness and real existential uncertainty.

“People don’t listen to each other anymore,’’ says Diliana De Jesus of Somerville, perusing the rows of questions lining the wheel. “You get caught up in the instant gratification of texting or e-mailing. But this is not technology. This is just a handwritten question in a box. You come back and look for your answer from a completely random person, and there’s something so refreshing about that.’’

Monsarrat’s wheel, with its plainly scribbled confessions of anxieties and doubts, is appealing in its unmediated clarity.

“I like that Johnny’s work could potentially change our perceptions about space and politics,’’ says Lillian Hsu, director of public art at the Cambridge Arts Council, which was responsible for bringing the wheel to Cambridge, another stop on its summer tour. “It makes you look around and think, who are these people that I’m with?’’

“Sometimes people think better for you when they’re outsiders,’’ says Karina Pantoja of New York City, squinting at the wheel in Davis Square. Then she shrugs, slips her own question into the box, and disappears down the crowded street.