In ‘Quake,’ the aftershocks tell all 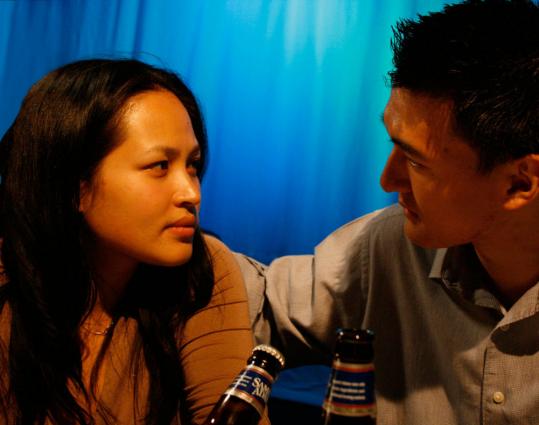 Giselle Ty as Sayoko and Chen Tang as Junpei, two of the three people in a complicated relationship in "After the Quake."
By Louise Kennedy Globe Staff / July 22, 2009

Frank Galati adapted “After the Quake’’ from two short stories by Haruki Murakami: “Superfrog Saves Tokyo,’’ in which a giant frog does indeed save Tokyo, and “Honey Pie,’’ in which a man tells bedtime stories to the young daughter of the woman he secretly loves.

Outsize adventure and small-scale domestic bliss: You wouldn’t think these elements would blend naturally onstage. And yet, in Shawn LaCount’s delicate and moving production for Company One at the Boston Center for the Arts, they do.

Part of the magic, in fact, comes from the contrast between the styles of the two stories. The intellectually sophisticated frog’s exploits have an almost comic-book quality of exaggeration and mock seriousness - he’s fond of quoting Nietzsche and Conrad - while the young man’s wooing-through-childcare carries an air of fragile sweetness. And Galati skillfully weaves the two together, so at times the storyteller is in fact telling us about the frog, and at other times the actor who plays the frog changes hats to become a narrator and bring us up to date on the young man.

The quake referred to in the title is the catastrophic tremor that struck Kobe, Japan, in 1995, though neither story deals directly with that event; Murakami wrote the whole collection as a sort of challenge to himself, to tell stories that in some way reflected the disaster without recounting it explicitly. But the aftermath of the earthquake infuses both tales: The frog is working to keep a malevolent giant worm from wreaking similar havoc on Tokyo, and the girl needs bedtime stories because she’s having nightmares in which “Earthquake Man’’ tries to stuff her into a tiny box.

And she’s not the only one suffering aftershocks. Junpei, her storyteller, grew up in Kobe and is now estranged from his parents there; he thinks of reconnecting after the quake but doesn’t. Instead he lives an increasingly isolated life in Tokyo that’s relieved only by telling stories to young Sala and her mother, Sayoko, who married Junpei’s best friend instead of him.

We don’t meet that friend, Takasuki, right away, and the complications of the relationships among the three of them are part of the story. But it’s always Junpei we care about most, especially because he’s portrayed with heartbreaking innocence and grace by a young actor named Chen Tang. Tang’s expressive, almost transparent features and irresistible smile draw our sympathy to him even as he’s telling us he’s isolated and unable to make friends.

Equally charismatic, if in a completely opposite way, is Michael Tow as Frog. Costume designer Miranda Kau Giurleo gives him slinky, drab-green gloves, subtly greenish goggle frames, and a leather jacket that gleams green in certain lights, but it’s Tow’s coiled, pouncing agility that makes his frogginess seem real. When he turns up unannounced in a bank collection officer’s apartment, the befuddled bureaucrat is as helpless to resist his charms as are we.

That bureaucrat is nicely played by Martin Lee, who doubles as the extroverted, boisterous Takasuki. Like Tow, who invests the secondary role of the narrator with his own presence, Lee finds clear ways to differentiate his two parts without exaggerating either one.

Such subtlety doesn’t extend, unfortunately, to Giselle Ty’s work as Sayoko. She’s way too loud for the small Plaza Theatre, and her whole performance seems pitched at a different level than that of the men. It’s unfortunate, because it undercuts our essential belief in the delicacy and complexity of her feelings for Junpei and Takasuki. But she does have some decent moments of maternal playfulness with little Sydney K. Penny, who makes the girl, Sala, as smart-alecky as she needs to be and yet doesn’t annoy.

Sean Cote’s set incorporates tropes of Japanese design - bento boxes, shoji screens, the upward swoop of a curving roof - and also proves ingeniously adaptable to the needs of each scene. Particularly given the restrictions of this space, it’s a marvel of thrift and responsive design, nicely accented by John Forbes’s thoughtful lighting.

Equally essential to setting the scene is the music composed by Arshan Gailus. Violinist Shaw Pong Liu and bass clarinetist James Wylie open the show with jazzy classical improvisations, then create moment after moment of beautifully realized accents for the emotional and physical events of the play. A roaring quake, a ticking clock, a shower of tears - all become, in Gailus’s evocative scoring, almost another character on the stage.

What’s especially lovely about the music is that it rarely calls attention to itself. It’s just there, helping to bring the story to life and adding a little beauty of its own. Only toward the end, when the music and the story both build to a predictable yet satisfying conclusion, do we realize how gently they had been flowing together all along, and how much we’ll miss their sweet, almost improvisational song when it’s gone.

Play by Frank Galati, adapted from “Honey Pie’’ and “Superfrog Saves Tokyo’’ in “After the Quake’’ by Haruki Murakami