With timeless charm, the romance comes naturally in ‘Carousel’ 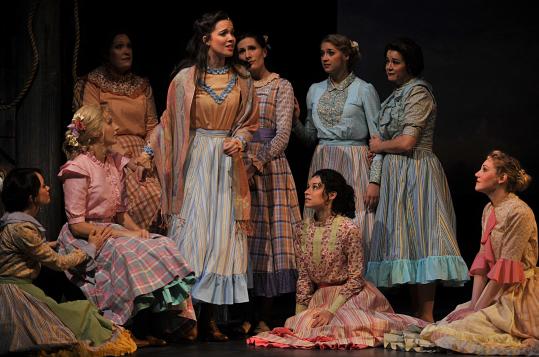 PITTSFIELD - Julianne Boyd loves old musicals, and she stages them with such freshness and verve that she makes audiences fall in love with them all over again, too.

The latest evidence of her infectious passion for the form is on the main stage of the Barrington Stage Company, where Boyd is artistic director. Her lovely, lively production of “Carousel’’ captures all the bittersweet romance of the Rodgers and Hammerstein classic, but it does so with a clean-lined, crisp sensibility that feels utterly modern and unsentimental.

That’s a tricky balance to maintain, especially in a period piece - set at the turn of the last century in a New England fishing village - that includes a sequence set in heaven. But Boyd does it, by letting her performers express themselves in full-throated, old-fashioned Broadway style in their songs, while keeping their acting more subtle and naturalistic.

Joshua Bergasse’s choreography, too, honors Agnes de Mille’s original dances even as it incorporates a more contemporary movement vocabulary. So the sailors still get a terrific “Hornpipe,’’ the second-act “Ballet’’ has a changeless elegance, and the “Carousel Waltz’’ that opens the show is as charmingly nostalgic as can be - but it all feels just right for 2009, too, as well as for the 1890 scene it depicts and the 1945 audience it was first written for.

It doesn’t hurt, of course, that the story is a timeless one: bad boy, good girl, and the love and the hurt between them. Patricia Noonan brings a delicate innocence and enduring strength to the role of Julie Jordan, and Aaron Ramey finds just the right blend of roughness and yearning for Billy Bigelow, the carnival roustabout who steals her heart. The tension and fleeting joy between them in “If I Loved You’’ would be reason enough to see the show.

But there’s plenty more to savor, from Teri Ralston’s peppery, zesty work as Nettie Fowler (the proprietor of Nettie’s Lobster Shack and Julie’s staunchest protector) to the childish, charming energy of Sara Jean Ford and Todd Buonopane as Julie’s best friend, Carrie, and the stolid, sweet fisherman she marries. Christopher Innvar does everything but twirl his mustache as the villainous Jigger Craigin, but perhaps we need him to push his eeevil to the limit in order to accept Billy’s inability to resist it.

And then there are the big dance numbers, from “June Is Bustin’ Out All Over’’ to “A Real Nice Clambake.’’ The entire company dances with precision and high spirits, swirling across the stage in delightful patterns of color and light. Darren Cohen’s musical direction is so lively that it’s easy to forget what he’s “directing’’: two pianos, no orchestra.

The production design, too, contributes to the seemingly effortless blend of period charm and post-millennial vitality. Robert Mark Morgan’s set features a single strong column - ship’s mast, tree trunk, or carousel axis, as required - and movable bits of seaside flotsam and carnival floss. Carousel horses’ heads, carved by Sam Craig, make a particularly lovely picture in the opening waltz, with the women dancers riding on the shoulders of the men.

Holly Cain’s costumes suit the time, place, and character - with an especially apt, racy red get-up for the carnival owner, Mrs. Mullin (a suitably hard Leslie Becker). They’re also not encumbered with excessive frills and furbelows; they tell us where we are, then let us follow the story into the timeless, placeless realm where all fables of love and redemption take place.

That realm, or at least this corner of it, is called Musical Land. And if you’re planning a visit, it’s tough to imagine a better guide than Julianne Boyd to see you through.

CAROUSEL Musical with music by

Based on Ferenc Molnar’s

At: BSC Mainstage, Pittsfield, through July 11.