Workspace, as art or documentary? 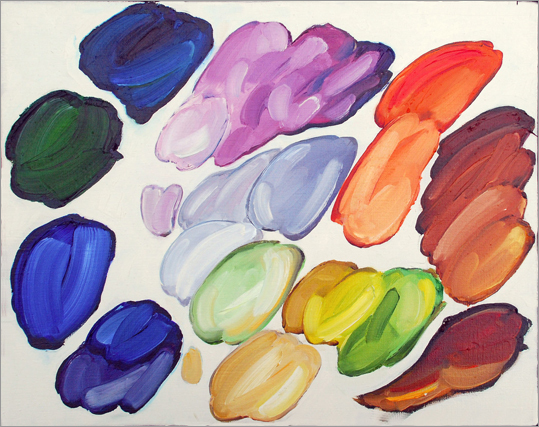 In his show "In the Painter's Studio," Joe Fig renders the palette of artists Chuck Close, and other objects of the workspace, in surprisingly minute detail.
By Cate McQuaid Globe Correspondent / June 10, 2009
Text size – +

Call Joe Fig a painting fanboy. Primarily a sculptor, he takes painters in their studios as his subject, rendering them in startlingly minute detail. In addition to his model-like sculptures, the show at Carroll and Sons Gallery features Fig's paintings: portraits of artists, and evocations of artists' palettes.

Looking at his replicas, you have to wonder if Fig hopes that by painstakingly re-creating the tools and workspaces of artists such as Chuck Close and Ross Bleckner, to somehow capture their magic.

Not that this show doesn't have its own enchantment. The artist's studio can be seen as a hallowed place, a physical manifestation of the artist's imagination - the space in which ideas sprout and take form.

Re-creating images from the studio as works of art is a gutsy leap. Is a copy of a palette or a work table an original artwork in its own right? There are also digital prints here of some of Fig's sculptures. All these iterations trumpet Fig's obsession, but they also probe questions of authorship: Who is the auteur here, Fig or his subject? Where does the art begin, or end? Is this art or documentary? The sculptor is canny about it all, making him a clever conceptual artist as well as a realist.

Fig's technical chops and intensity of purpose imbue his works with the easy charm of intricate miniature worlds, appealing to anyone who wanders in. "Ross Bleckner 2007" shows us that artist's capacious, orderly studio from the outside; to see the artist at work, surrounded by canvases, we have to peer in the windows.

The details Fig offers fascinate: A lineup of "Palette Paintings" dares to posit the accumulated schmears of pigment as paintings in themselves, although they lack any forethought. It's impossible to resist comparing Close's discrete puddles of tone with Inka Essenhigh's morass of hot red, or Jane Freilicher's storm of slanting dabs, which looks like a blown-up detail from an Impressionist painting. The fastidious sculptural reproduction of Essenhigh's paint-speckled, trash-scattered drop cloth and James Siena's work table, crowded with jars, cups, and stirrers candy-coated with bright paint, is mind-boggling.

It's an absorbing show. What's missing is a knowing nod toward our habit of bowing, in the church of creativity, to artists as gods. Fig merely bows deeper than most. I'd like to see him question his belief system.

Diary of a 102-year-old
Ann Wessmann has photocopied her grandmother's daily diary on vellum and constructed wheeling, translucent wall sculptures for her show at Kingston Gallery. Even without knowing the content, they're a pleasure to behold: large but delicate circles of spiraling paper, with each sheet in accordion folds that catch shadows and light as you pass. Some are as big as 8 feet in diameter. They seem to breathe as the light moves through them, and flutter if a breeze comes by.

Wessmann substitutes blank sheets for missing diaries, or for the first 36 years of her grandmother's life, before she started writing. She died in 1999, at 102, and her last days were also unrecorded. The scribbles, when they appear, act as another layer of shadow, although the often illegible handwritten lines hint that the shadow buzzes with meaning. When you can make out a line - "January 1, 1943. I woke up from a rather unpleasant dream" - you get pulled into another, more intimate layer of the work.

Colorist Rose Olson has a summery little show in Kingston's members' gallery. She paints like a minimalist, in simple horizontal bands of color, but her work is lush. Her thin washes on wood panel let the wood grain show through, revealing the organic through the geometric.

Now and then she uses almost transparent opalescent pigments. "Warm Encounter" is mostly bright orange, with bold purple stripes and a thread of blue, set off by the barest veil of sparkly silver that winks at you, if you care to notice. These quiet nuances play beautifully against her warm, gaudy contrasts.

Three distinct styles
Morgan Bulkeley's riotous painting "Who's the Daddy" is the centerpiece of "Unintended Consequences," a three-person show at Howard Yezerski Gallery that explores our fraught relationship with the natural world.

"Who's the Daddy" is standard Bulkeley, with nitwitted nude figures on the beach amid the clutter of society: tear sheets from the National Enquirer, photos of Einstein and Freud, toy robots, Superman, and endangered bees.

Among all the pathos and comedy, Bulkeley attends to issues of abstraction and surface. His pale beach nearly melts into the sky, which flattens the action onto the picture plane, making it more chaotic.

Catherine Kehoe, usually a portrait painter, offers still lifes of flowers. Though still, they are hardly serene; the angles and planes of Kehoe's paintings defy serenity. Donald Shambroom also paints flowers; with hot colors and languid reach, they come across as almost monstrous.

Bulkeley is equal parts painter and commentator. Kehoe simply paints. Shambroom, while deft with a brush, seems more concerned with message than medium. With their mixed motivations, they make an odd, not quite satisfying, trio.

JOE FIG: In the Painter's Studio At: Carroll and Sons,