The house Lombardo built - and left behind 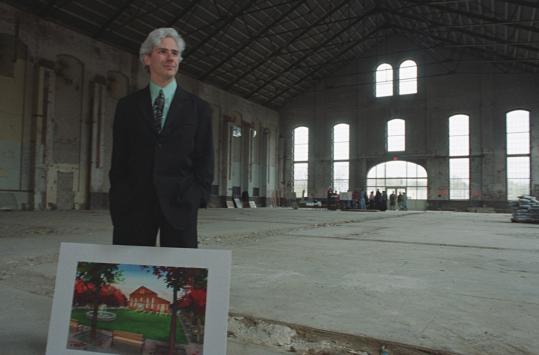 Earlier on the day of the Nortons, Lombardo's loquaciousness was in evidence during a conversation over lunch in Kenmore Square, where he reflected on his 12-plus years at New Rep, his hopes for San Jose, and his thoughts on the future of theater.

Aside from having roses blooming 10 months out of the year, Lombardo said, San Jose, Calif., isn't as different from Boston as you might think. With Stanford University, Google, and Apple all in the neighborhood, it has "a very highly educated audience," and yet the theater there also has to work to attract younger and more diverse audiences. The economy, too, is struggling there as it is here.

"We actually joked about that, moving smack in the middle of the biggest recession in a generation," Lombardo said of conversations with his wife, actress Rachel Harker. "But then we said, well, we'd be struggling back there, too."

One big difference, Lombardo said, "is the responsibility to be a flagship theater for the city. It's a chance to be a spokesman for the arts, a leader in the arts. That opportunity is one of the reasons I moved - I wanted to try that role. It's a really precarious time for the arts in America, I think, so it's kind of a wonderful time to be an arts leader. There's a really good fight to be had."

As for New Rep's new artistic director, Kate Warner, Lombardo said he participated in the search process until the committee had narrowed the choice to three finalists, and he "absolutely agreed" with all three of those choices. In her selections for next season, "I think there's some stuff that feels totally New Rep," he said, and some plays that may move the theater in a slightly different direction.

"I was actually hoping that New Rep would see this as an opportunity to redefine itself," Lombardo said. "The danger was that they'd look for a clone of me. I was different from [New Rep founder] Larry Lane. You need to try new things."

One of the new things that Lombardo himself tried in 1999 now stands as "a defining moment" of his New Rep tenure, he said. When he directed "Rosencrantz and Guildenstern Are Dead," he recalled, "the press loved it, it won awards, we had huge single-ticket sales, there was an incredible lowering of the average audience age." But its Hamlet on roller skates, Gertrude in drag, and other shenanigans also provoked "enormous numbers of walkouts - and of the subscribers who did not renew that year, almost every one cited 'Rosencrantz and Guildenstern.' "

He saw that reaction, he says, as a challenge: "What does New Rep want to be? Do we continue that trajectory and attract the single-ticket, younger audience, or are we going to say, ooh, this was a mistake, let's do more Alan Ayckbourn and Shaw?"

As is clear from some of his later projects - "The Pillowman," say, or others he cites as highlights, from "Sweeney Todd" to "Ragtime" to "The Clean House" - his answer was not Ayckbourn and Shaw. Beyond those specific choices, though, he said his mission at New Rep was always institutional as well as artistic.

"I wanted to go to a theater where there was really an opportunity to grow it and change it and have an impact," Lombardo said, recalling his decision to come to New Rep from Ohio's Players Guild. And at the time, he said, the Boston area needed "a midsize theater that could put on provocative, smart, literate plays. That's what was missing."

He's proud of having built New Rep into that kind of theater, even as the Lyric Stage Company was developing into a similarly strong midsize venue. He's also proud of retiring the debt he inherited and of shepherding the company's 2005 move from its cramped space in a Newton Highlands church to its new and spacious quarters, featuring a main stage and a smaller black box, at Watertown's Arsenal Center for the Arts.

Once New Rep had settled into its new home, though, he said, "I thought about my internal 'artistic director' checklist, and I thought, either institutionally or as an artist, I think I've done it. One thing I still hadn't done was to assume the responsibility of leading a flagship theater. And I wanted to be compensating artists at what they're really worth. I was paying them $300 a week - it's crazy. And that really started to matter to me."

Moving up was a risk, he said, but one that felt necessary.