Harnessing the power of waste 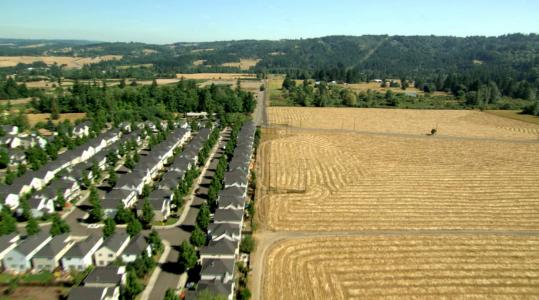 An ''urban growth boundary'' in Portland, Ore. Oregon is one of three US states that require cities to establish such boundaries. (Northern Light Productions)
By Robert Campbell Globe Correspondent / May 10, 2009
Text size – +

Should you think of your home as a potential coal mine? Or as your own personal oil well?

Maybe you should. American dwellings waste a lot of energy. If we could recover that lost energy, and put it to new uses, we'd be treating the house as a source of energy rather than a drain on it. It would be like a private mine or well.

That, at least, is the fascinating theory put forth recently in Cambridge at a conference called "Planning the New City." The conference was an attempt to look into the future of city planning and design.

What I'll call the coal-mine theory was promoted in a talk by Douglas Foy, the former head of the Conservation Law Foundation and former state chief of Commonwealth development. Foy now runs a firm called Serrafix, which invests in energy initiatives.

Foy figures that 40 percent of the energy that comes into a city is wasted. He can't believe, for instance, that rational human beings would leave the water heater on when they go on vacation, so that it can continue, night and day, to be able to create hot showers for people who aren't there.

"Your little power plant is running in August when no one is home," Foy says. He's good with words. His term for useless devices that draw energy is "vampires." In the dark of night, when no one needs them or wants them, the vampires come out of your walls to suck up energy.

Typical vampires? According to Foy, the little digital clock on your microwave oven uses more energy, over the course of a year, than the oven itself. How many clocks like that do you own? Foy counted 26 in his own home. I must be backward: I could only find nine in mine.

"If a TV is off but it's still plugged in, it's drawing energy," says Foy. "If your cellphone charger is plugged in, it's using energy whether you're charging or not. Vampires suck up 22 percent of the energy in a house."

Foy figures he could turn all that waste into gold. "Think of energy waste as a strategic asset," he says, only half kidding. "I want to own all the hot water heaters in the United States. I'll make them more efficient. I'll fit them all with wireless devices that enable them to be turned off for just one hour, 20 times a year. The energy I save can be used for other purposes. I'll have a company based on hot water power."

Foy, though, went over the top on one issue. "New York City," he claimed, "is the most energy-efficient community in North America."

That's true only if you draw a tight line around the city and measure just what's inside it. Then New York - and especially Manhattan - appear to be very efficient, because most people travel by foot, subway, or bus rather than by car. And many of them live in apartments, which snuggle among other apartments instead of being exposed to the weather like a private house.

But if you look outside the tight line, you become aware of the myriad jet-burning planes and diesel-fueled trucks that roar into New York to supply the city with most of its food and other supplies, some of it arriving from far continents. Challenged, Foy agreed there will be more local agriculture in the city of the future.

Foy was merely the most entertaining speaker at the "Planning the New City" conference, which ran for two days at the Lincoln Institute of Land Policy, the Nieman Foundation, and the Harvard Graduate School of Design. Michael Dukakis, the former governor and presidential candidate who is now a professor at Northeastern and UCLA, talked about the need to build public transit today the way we built interstate highways a generation ago. Chicago Tribune reporter Blair Kamin talked about Mayor Richard Daley as a "democratically elected monarch" with the skill and power to enforce a green ethic. A good short film was shown on Portland, Ore., and the controversial effort there to limit sprawl by drawing a line around the city and forbidding development outside it. There were some amazing images of the resulting sharp edge between built-up city and open farmland.

And as at any good conference, there were lots of little thoughts and facts to ponder. Someone argued that crime rates fell in the 1990s not because of anything done by the police, but simply because immigration increased in those years - high immigration, said this speaker, correlates statistically with low crime. Someone else noted that 90 percent of mortgage delinquencies are occurring in only 22 percent of counties - that the US, in other words, is still a nation deeply divided regionally by economics.

My favorite odd remark, though, came from Jeff Chapman, an economist from Arizona State University. Chapman thought Americans should stop celebrating Tax Freedom Day. Anti-tax activists complain that up until that date - it was April 13 this year - the average citizen is working solely for the purpose of making enough money to pay taxes. Chapman suggested a switch.

"Instead of using the date to complain about how long we work," he said, "let's say that after that date we're getting free public services - free schools, parks, libraries."