Yes, and if history is any guide, the local production of 'Jerry Springer: The Opera' will be controversial 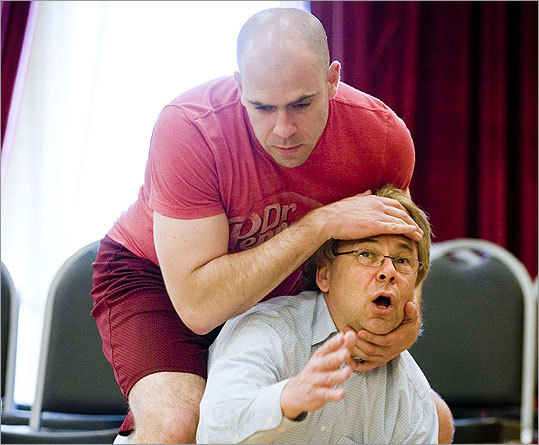 It wouldn't be Jerry Springer without a little controversy.

So it's no surprise that "Jerry Springer: The Opera," an award-winning British musical that opens in Boston on Friday in a SpeakEasy Stage Company production, is kicking up a fuss ahead of time.

The show, which imagines trash-TV host Jerry Springer trying to get more control over his broadcast before he has a near-death experience is, indeed, filthy. There are tap dancing Ku Klux Klansmen, transgendered whoremongers, and a dream sequence that includes Satan and Adam and Eve physically going head to head with Jesus.

Six years ago, the show became a smash at the National Theatre in London, much to the shock of its creators Richard Thomas and Stewart Lee. A British tour was scheduled, and a 2005 Broadway run was announced.

That is until British Christian protesters by the hundreds started clamoring that they found the show blasphemous. The Broadway deal was quickly derailed. The fate of the show was in question.

"I thought I was going to be a [expletive] multimillionaire!" says Thomas in a charming - and curse-laden - telephone interview from Australia. "And then here come the protesters. People who protested never saw the show. They sort of jumped on some moral gravy train. They [expletive] killed the show in England. They killed the show going on Broadway.

"Jerry Springer: The Opera" has been popping up at regional theaters in Wash ington, D.C., and Chicago. A one-night concert version at Carnegie Hall in New York, starring Harvey Keitel, drew raves in 2008.

It also brought protests. And the Boston Center for the Arts, where "Jerry Springer" will play locally, is girding for them, too.

The BCA has received so many e-mails from Christian groups, mostly from out of state, decrying the production that it had to issue a statement saying that all views should be expressed, but the show should go on.

"Just as we have no intent to stop the production, we have no intent on discouraging the protesters from expressing themselves," the statement said. The center said it would have the police department on hand to guarantee public safety and make sure nearby South End businesses could be entered.

Of course, putting the words "Jerry Springer and "opera" together is hardly the likeliest combination. But Thomas says what made the talk show provocative was how it allowed everyday people to express extreme emotions - even if a lot of those expressions had to be bleeped out for broadcast. Making an opera out of the material took it to another level, he says, mixing high art with lowbrow entertainment.

When he has a break from rehearsals, SpeakEasy director Paul Daigneault admits that he watches clips of the talk show repeatedly on YouTube.

"There's a limit on how [many] I can do in a day," he says with a deep sigh and chuckle. "It's like watching a car wreck. You just can't turn away."

But in Springer's popularity, Daigneault finds a story to tell about voyeurism and the quest for the spotlight. There are the oftentimes unfathomable guests in search of their 15 minutes of fame, he says, and there's the audience, whether on the show or in their living rooms, ashamed to watch, but watching nonetheless.

With a set made to look like the talk show, complete with audiences chanting the now infamous "Jerry! Jerry! Jerry!," the production is all sung, with the exception of the lines from Michael Fennimore, who plays the title role.

A few months back, Fennimore, 57, who has played various roles in "Shear Madness" for the past 30 years, went to a SpeakEasy audition, hoping to land a part in the Irish drama "The Seafarer."

But Daigneault had something else in mind.

"I said 'Oh my God, it's Jerry,' " says Daigneault, referring to Fennimore's full head of graying hair, his medium build, and the hunching way he walks. "And his eyes lit up. He's got the look. He speaks in the same rhythm. I told him he had to come back and audition for 'Jerry Springer.' "

"Jerry Springer, what a multifaceted person," says Fennimore, a husband and father of two who teaches acting at University of Massachusetts Boston and Boston Casting.

"He was a city councilor, mayor of Cincinnati, he paid with a check for a prostitute, but he's very socially conscious," Fennimore says, ticking off points along the host's idiosyncratic rise to fame. "When he speaks to political groups, I mean he's beautiful. But he has this other side. He exposes the underbelly of America - America's dirty little secrets."

Fennimore has a colorful history himself. Painfully shy as a child, he's been a waiter, a bartender, a bellhop, and a truck driver. He also was once Bachelor Number Two on "The Dating Game."

Playing an unscrupulous character in a play at the center of a brewing controversy is just one more thing he gets to cross off his list.

"In the play people are saying things to God, about God, and people get all up in arms. I don't get it," Fennimore says, his voice growing louder. "God doesn't need defending. What needs defending are the children who are being abused, the hunger, the disabled, all the things that are going on in the world that people can actually do something about. And they are objecting to the theater, a play? I don't get it."

BCA executive director Veronique LeMelle says she stands by SpeakEasy's right to perform the show, and as long as the protest is legal and safe, "I don't have a problem with it," she says. "But the general public has every right to make the decision whether to see the play or not."

Thomas, the cocreator, hopes he can journey from overseas to be among them. Meanwhile, he's working on his next commission, from the Royal Opera House in London. His wish: the same success, but less controversy.

"I'm putting the final touches on it now," he says.

Megan Tench can be reached at mtench@globe.com

JERRY SPRINGER: The Opera Presented by SpeakEasy Stage Company presents at the Boston Center for the Arts, Calderwood Pavilion May 1-May 30. Tickets $25-$54617-933-8300 www.bostontheatrescene.com