THIS STORY HAS BEEN FORMATTED FOR EASY PRINTING
TRENDSETTER

For Eric Roth, it's what's inside that counts 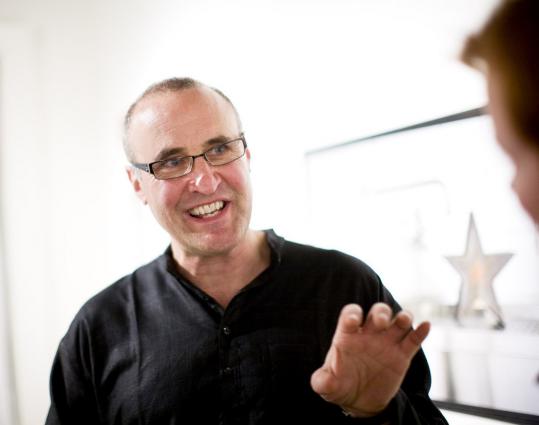 The photographs of Eric Roth (above) are featured in ''Personal Space'' at the Boston Design Center. Below: a vignette from a Cambridge home (left); a colorful house in Chappaquiddick. (Yoon S. Byun/Globe Staff (Above); Eric Roth (Below))
By Meaghan Agnew Globe Correspondent / April 23, 2009
Text size – +

Eric Roth lives an interior life. The West Newton native and Topsfield resident has spent more than 30 years inside the area's most sumptuous homes, photographing the work of local designers and architects for magazines like Elle Décor and Metropolitan Home. His handicraft is now the subject of "Personal Space," an exhibit at the Boston Design Center staged in last year's Dream Home space and featuring 62 large-scale reprints of Roth's favorite images.

"It's really so exciting for me and my staff," Roth said wearily but happily the day after the exhibit's opening. "We're on a cloud right now."

After graduating from the University of Connecticut, Roth began a career in furniture making. But put off by what he diplomatically calls the "lack of social aspect of woodworking," Roth turned to his other creative outlet, photography, and quickly found his calling committing other people's décors to pictorial memory.

" was something that really clicked for me," said Roth, 56.

Over the decades, he has had a front-row view of the city's style evolution. When he began, "most interiors that were being done professionally in Boston were very traditional and sometimes they were a bit gaudy as well," Roth recalled. "But I've just seen it grow and branch out and evolve and become more sophisticated."

Roth, who estimates he's shot 2,000 interiors over the years, works to bring intimacy to even the most extravagant interiors. "I try to work spontaneously and respond to what's in the house," he said. "It's kind of my job to fall in love with it."

But he's not above the occasional stagecrafting. "One thing I learned a long time ago: puppies," he said. "You can't go wrong with puppies."

How would you describe your own interior?

My house is actually an old farmhouse. It's colorful; it's pretty cozy. I have one room that I call the "photobrary" - pictures hanging on the wall, a huge bookshelf full of photography books, and these flat files just filled drawer after drawer with large prints.

What's your favorite object in your house?

I have a hobby - I make didgeridoo floor lamps. I bought a didgeridoo for my daughter for Christmas, and one day I looked at it and thought it would make a great floor lamp. I've made about 10 of them and given them away as gifts.

Where do you source your didgeridoos?

I'm going to keep that a secret.

What's your go-to outfit when you're working?

How do you unwind at the end of the day?

A bottle of Ipswich Ale and maybe guacamole and chips.

I really like HGTV. I love those shows like the makeover shows and that kind of thing. "America's Next Top Model" I think is a wonderful show. It's mainly because of my daughter - I wouldn't watch it on my own - but I learn a lot about photography watching that.

Ever thought there should be a reality show for aspiring photographers?

That would be fabulous! It would take people into all kinds of situations. . . . It could lead to almost anything.

The new fashion trend is shopping your own closet. Do you think people can "shop their own home"?

They can find ways to freshen things up. They can have their favorite family pictures scanned and reprinted nicely for artwork. Or get those sample paints and paint little parts of their house. Just have fun and express yourself. The houses that have the most money spent on them aren't necessarily the most interesting by a long shot.

The Jordan's Clearance Center. I got my couch there. It's a beautiful linen slipcover couch. It was just sitting there, and it was just what I wanted.

Favorite interior in all of Boston?

The main staircase of the Boston Public Library is incredible and probably underappreciated. It has beautiful murals and gigantic marble lions. And I love Memorial Hall in Harvard - it's like Harry Potter or something.

What's the most overphotographed spot in the city?

How is it that you can overphotograph the Boston Public Garden? When the flowers are in bloom and the swan boats are gliding about. . .

What's a Friday night on the town like for you?

We might go to a play in the Theatre District or a play at the Huntington Theatre, then we might have dinner at Pho Republique in the South End, and I would then definitely want to go to Aquitaine for drinks.

Favorite spot to while away a sunny afternoon?

We walk around the Chestnut Hill Reservation. I love the Arboretum. And my favorite walk is from the ICA to the North End.

What's the best gallery in town to take in some photography?

I love the Robert Klein Gallery. He just has a number of really good collections; he represents all kinds of photographers that I admire. And the Photographic Resource Center is really great.

Right after the opening, my girlfriend said, "Let's go to Chinatown for dinner." So we jumped in the car and we went to Gourmet Dumpling House in Chinatown. It was so great. They have a million things on the menu. Everything was delicious. The five of us ate like kings for like 50 bucks. You can mention the crispy fried tofu - that and the Garden of Pleasure.

[Laughs] No, no, it's all vegetables, it's perfectly legitimate.