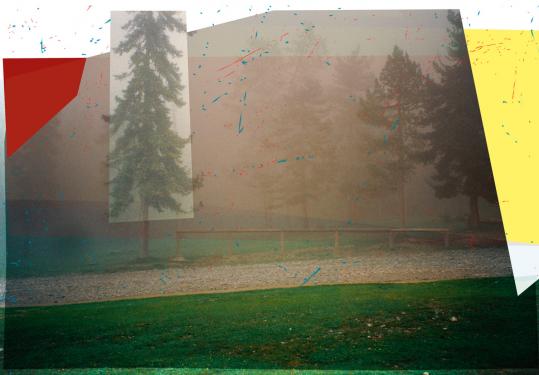 Visualization sciences is a more comprehensive, and perhaps more accurate, term than photographic resource to describe the contents of "Syntax." The show is part of this year's Boston Cyberarts Festival. Few of the images operate as photographs, or at least not as the term is usually employed. In fact, they rarely resemble photographs as usually recognized. The images are either renderings of the digital landscape, draw extensively on digital elements, or both.

The invention of photography changed the nature of seeing. It made duration a tool rather than an impediment. The Web has done nothing so fundamental visually. It has, however, given us new things to see and opened up new ways of seeing. As Luke Strosnider, one of the artists in "Syntax" writes, "Much of the history of photography is also a history of technology, and our current time is one of intense transition."

It isn't so much the syntax of photography that's being addressed in the show as its vocabulary or usage. That is, the point isn't to rearrange old elements as to introduce new ones - new procedures, too. Brian Piana, for example, creates abstract animations based on the experience of using specific websites. His work would mystify George Eastman. It might even mystify Edwin Land. But something like "Browsing for Dannielle Tegeder" is great fun. It could be a version of "Pong," the '70s video game, as designed by Mark Rothko.

For her series "Go ogle" (take a moment to savor that title), Meggan Gould downloaded a series of images that are composites from Google searches. Two 16-piece installations are on display. Delicate and ghostly, the pictures are like pastel emanations from some cyber-seance. One of them shows a vapory "Mona Lisa." Finding a digitized equivalent of sfumato would have made Leonardo laugh with pleasure.

Pleasure, at least of the pictorial kind, is not the strong suit of "Syntax." Almost all the images are stimulating intellectually. Few are exciting visually. Most are chilly, distanced, and about as sensual as software. Like software, they can be ingenious. But ingenuity has a limited aesthetic utility. As Gertrude Stein once said, "Remarks are not literature."

Leigh Brodie's pictures reassemble digital information visually. The results look like circuit diagrams on holiday or overworked punch cards (remember them?). Mark J. Stock, who lives in Newton, has a background in aerospace engineering. His pictures, which seek "to open up," he writes, "complex systems to careful observation," have terrific titles: "Midnight in the Bathtub of Good and Evil," "Perpetuity?," "Inside the Bomb." But the appearance of his work does not match its considerable conceptual fascination.

Patti Ambrogi takes images of celebrated women - Martha Stewart, Monica Lewinsky, Caroline Kennedy, Sarah Palin, Hillary Rodham Clinton - and reworks them electronically so that each pixel consists of a graphic icon that relates in some way to the subject's persona. It's a clever idea, as is Strosnider's representing some of Ansel Adams's best-known photographs as histograms. (Histograms are graphical presentations of frequencies or values in the form of bars.) Yet in each case the idea behind the pictures is so much more interesting than the pictures themselves.

Benno Friedman, who lives in Sheffield, sustains interest on both levels. Converting his photographs on film into digital form lets him play with visual meaning. "In looking at a photograph," he asks, "how many pixels can be removed or altered before the familiar becomes the unrecognizable? At what point does a photograph cease to be?" Geometry, shape, and color coolly collide in these new versions of old images.

Making the old new - and thus different - is Matthew Swarts's concern, too. He does it by addition instead of subtraction. When he inherited a collection of vintage photographs from his grandfather, Swarts began to make abstract sketches, which he then scanned and superimposed on digital versions of the photographs. The results vary wildly. One looks like an explosion in a Spirograph factory (that's not a compliment). Another covers a sunbathing woman with a cloud of purple scribbles. The effect is rather enchanting, as if John Heartfield had had a mauve period during which he made art with an atomizer.

SYNTAX At: the Photographic