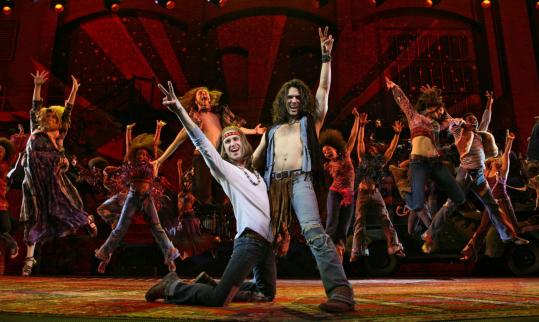 NEW YORK - The bad puns almost write themselves. It's too long. It's dull. It's flat. It has lost its shine.

I can imagine, barely, that the Public Theater's revival of "Hair: The American Tribal Love-Rock Musical" was more fun last summer in Central Park. But in Broadway's Al Hirschfeld Theatre, where it officially opened last night, it felt canned. Sorry, that may sound more like a "Hairspray" pun, but it's the best word I can muster for this teased-up, overblown affair.

I also have no doubt that the original "Hair," back in 1967, before most of its current devotees were born, was as mind-blowing and game-changing as everyone says. Even as it left me cold in its new form, I could think back a few decades and imagine how fresh, how freeing, how joyously wild it must have been.

But it has not, to put it mildly, aged well. What may once have seemed winningly ingenuous and gently rebellious now feels unbearably naive and unforgivably glib. The antiwar sentiments of the show are still painfully relevant but uselessly one-dimensional, and beyond that there's . . . what? Drug jokes, sex jokes, squares-vs.-hippie jokes, and a lot of other stuff that must have sounded a little corny even the first time around.

Well, there is the music, of course. And those of us who grew up to "Aquarius" and "Good Morning Starshine" and "Let the Sun Shine In" do, undeniably, get the slight if giddy pleasure of hearing Galt McDermot's light little tunes again. But you are perhaps forgetting just how many other songs there are in this score, and just how many of them sound alike, and just how tired you will get of hearing some of them even one more time.

Part of what makes them tiresome this time around is that they are all, in our modern fashion, heavily amplified. That means that even in the famous nude tableau, the body microphones never come off. And few things are more depressing than watching a musical that purports to celebrate freedom and spontaneity while requiring its performers to sing with wires.

The packaged feeling extends to Karole Armitage's choreography, which has even the wild "drug" scenes feeling tightly controlled and minutely organized. The members of the Tribe (you know, the chorus) rush up and down the aisles, hugging and jumping on seats and leaning out from the boxes, but not a single movement feels spontaneous or real. It's like sitting in the middle of a giant commercial for, oh, Gap Tie-Dye or McPot.

It's hard to get much sense of Diane Paulus's directorial hand in all this, as the choreographed moments dominate so heavily over the thinly plotted and barely characterized conversational ones. Paulus, the new artistic director of the American Repertory Theatre, does accomplish such tasks as focusing our attention where she wants it, keeping things moving, and landing the laughs (such as they are). But this is really not a show that lets you see or hear much beyond its swirling, whirling colors and sounds.

As for the performers, they're young, they're hippie-cute (often painfully, artfully so, especially in Michael every-fringe-carefully-in-place costume designs), and they have a lot of energy. Sasha Allen nails "Aquarius," starting the show off on a high note, but Caissie Levy's "Good Morning Starshine" feels curiously subdued. (When I started thinking fondly of the Donovan cover, I knew there was a problem.)

And Will Swenson's Berger is so wonderfully self-absorbed, preening, and manipulative that I just had to laugh when I saw his program bio, complete with astrological sign (apparently all but required for all cast members here): "Scorpio, of course."

Of course. For the rest, I'm no astrologer, but I'd have to say that, alas, Jupiter is not aligned with Mars.

Book and lyrics by Gerome Ragni and James Rado, music by Galt McDermot