The tales of 'The Buddha' have a calming effect 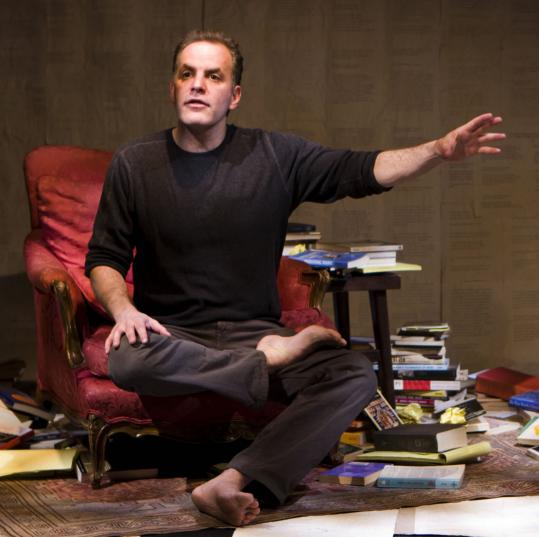 A worn, comfy red armchair sits in the stage area of the Boston Center for the Arts Black Box Theatre, surrounded by a clutter of books about Buddhism and meditation. Behind this homey scene hang four panels covered neatly with pages that look like they could be from the collection of stories and teachings of the Buddha. Production designer Nikki Black has the panels run down to the floor and underneath the piles of books and the chair, creating the feeling that the audience and the performer are embraced by the Buddha's stories and their simple wisdom.

Actor Evan Brenner, who conceived "The Buddha: In His Own Words," enters the room and begins to spin his tale of one man's journey to enlightenment in a gentle, soothing voice. What makes his story so enchanting is that the man is Siddhartha Gautama, and we meet him before he became known as the Buddha. By starting with the stories of his earliest years and moving through his long life, Brenner creates a compelling portrait of a man who struggled to find his life's path. "The Buddha: In His Own Words" is made up of selections from the Pali Canon, stories that form the heart of the Buddhist philosophy, but in Brenner's hands they become poignant, amusing, revealing moments in the life of a man whose teachings may be more than 2,000 years old but, in Brenner's telling, become remarkably contemporary.

Born into a life of wealth and luxury, Siddhartha Gautama rejected the "household life" at age 29 and chose the "holy life," going out into the world to seek enlightenment.

"Do you see anything in this world that is everlasting?" he asks. "The inevitability of death removes pride in this life."

He spent the next several years learning from a series of teachers, experiencing grueling ascetic practices in his quest to achieve unwavering mindfulness, and ultimately nirvana. It may sound a little heady, but Brenner, dressed in a nondescript shirt and pants and with the most straightforward delivery, makes the Buddha's choices, failures, and frustrations feel human, simple, and recognizable.

Brenner has a way of telling his stories as if he's speaking to each member of the audience individually. His gaze is steady and intense, and yet there's a peacefulness about him that is guaranteed to lower your blood pressure. Brenner also finds the humor and adventure in the Buddha's life, as well as his feelings of loss and longing. "Life is so short," he says at one point. "You should live as if your hair is on fire." The Buddha's development of the four Noble Truths feels far less abstract when we hear about the specific experiences that led him to them.

At a time of so much fear and uncertainty, with the constant attention on the worldly distractions the Buddha counsels his followers to avoid, "The Buddha: In His Own Words" is a refreshing and calming reminder that life is "a tiny drop of dew, a star at dawn, a phantom, a dream," and that "all that comes into being passes away." Although Brenner, for one, has been studying Buddhism for over two decades, in his 90-minute presentation, he makes the journey toward nirvana feel like one worth taking.

THE BUDDHA: IN HIS OWN WORDS A play conceived and performed by Evan Brenner from the Pali Canon.