The art of a rivalry

An MFA exhibit highlights the battle between three Renaissance artists, and the works it inspired 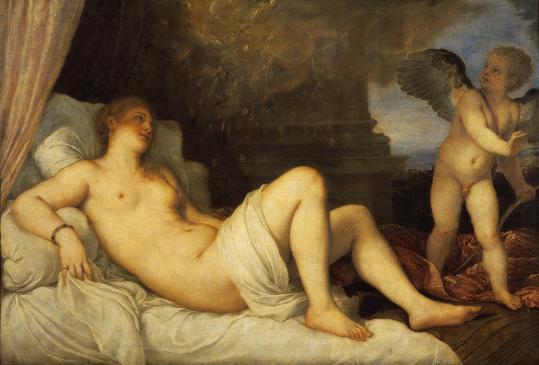 Titian's ''Danaë,'' painted for a nephew of Pope Paul III, shows her being ravished by Jupiter in the form of a shower of gold. (Courtesy, Museum of Fine Arts, Boston)
By Sebastian Smee Globe Staff / March 13, 2009
Text size – +

Jacopo Tintoretto's timing was off. He was one of the most lavishly gifted painters of all time. But to make a name for himself, he had to struggle to get out from under the shadow of someone even better: Tiziano Vecellio, otherwise known as Titian.

It didn't help that Titian detested him. Worse, Tintoretto also had to compete against Paulo Veronese, Titian's talented protégé and a man who knew how to turn on the charm.

Was Tintoretto up to the challenge?

If you doubt it for even a second, take a look at the self-portrait he made in his mid-to-late 20s. Tintoretto stares with bloodshot eyes through pink lids and long dark lashes, the muscles above his nose bunched in belligerent resolve. Turning to face the viewer, he has the look of someone who needs no more than a sliver of an excuse to draw his sword and apply its edge to your neck.

The painting hangs near the beginning of "Titian, Tintoretto, Veronese: Rivals in Renaissance Venice," a knockout show that opens Sunday at the Museum of Fine Arts. Organized by MFA assistant curator of paintings Frederick Ilchman, the exhibition is a collaboration with the Louvre in Paris and contains, besides many other wonders, a handful of the sexiest pictures ever painted.

Rivalry has been the animating idea behind many a recent blockbuster. The appeal is obvious: Personal antipathy piques our interest, humanizing art history and bringing sporty satisfactions to more pious forms of genius talk.

Here the concept is not just apt, it's revelatory. And the fact that it's a three-way rivalry involving generational conflict gives it a moody, Shakespearean aspect. The last room in particular, which includes depictions of St. Jerome in the wilderness by the three artists all in a row, conjures visions of King Lear on the heath.

The Renaissance biographer Giorgio Vasari visited Venice only briefly, but was struck by the climate of intense rivalry among its artists. Titian's early career was a series of struggles for ascendancy, first with his teachers Giovanni Bellini and Giorgione and later with Pordenone and the great Florentine, Michelangelo (a major influence on Tintoretto).

By the time the rivalry between our three heroes here got going, Titian was already established as the preeminent artist in Venice. He had had his fill of public commissions in the city and was making the most of his newfound international fame, executing works for the Holy Roman Emperor Charles V as well as Pope Paul III and his family (look out for his portrait of the aging, remorseless old pope under intense duress in the first room).

Titian's withdrawal from the field in Venice left a power vacuum, which Tintoretto wasted no time trying to fill. He had studied briefly with Titian. One account has it that Titian found Tintoretto "spiritoso" (a smart aleck) and cast him out. Another suggests that Titian was in the habit of keeping his works under lock and key to prevent his students from stealing his ideas, and that he was particularly wary of the gifted Tintoretto. "To hell with this," might have been Tintoretto's forgivable response.

Tintoretto's ambition was, in the words of his early biographer, Carlo Ridolfi, to "make himself known as the most daring painter in the world." His early work impressed Titian's longtime friend, the wide-girthed sensualist and influential critic Pietro Aretino. (In a nice touch, a decorative work Tintoretto painted for Aretino's house has been installed here on the ceiling, as was originally intended.) Aretino's support dried up within a few years, quite possibly thanks to Titian's intervention.

Tintoretto favored theatrical lighting, abrupt tonal shifts, a bold use of shadows, and an earthier, more monochromatic palette than did his Venetian confreres. He built up forms from dark grounds using light highlights applied with a skittering, dry brush. His contours have a nervous, vibrating quality that seems to bring the space around them to life, and his compositions make use of lurching shifts in scale, plunging space, and dynamic diagonals.

You can see his technique at work in the fabulous feathered headwear in his early triumph "Esther Before Ahasuerus." This painting is paired with a very early Veronese, from when he still lived in Verona. The composition is similar - a cluster of people around a swooning woman - but the treatment quite different.

Veronese, whose art matured more quickly than Tintoretto's, worked with a gorgeous, lighter palette ("lime green, robin's egg blue, salmon pink" as Ilchman puts it in the catalog, to which I would add "very tangy orange"). He favored tighter, more classical compositions and credible space defined by framing architecture. His greatest paintings leave you flustered; they are the last word in Venetian sumptuousness.

Unlike Titian or Veronese, Tintoretto never enjoyed sustained patronage from a single source. He had to fight for every commission. If the job were prestigious enough, he was prepared to offer his services at bargain rates, and in some instances, to resort to brazenly underhanded tactics.

Between them, Tintoretto and Veronese dominated the city's public commissions in the second half of the 16th century.

Titian, suggests Ilchman, used his former student Veronese as a pawn in his rivalry with Tintoretto, frequently boosting him at Tintoretto's expense. But Veronese was no one's fool and was not above deliberately imitating Titian to gain his favor.

Of course, beneath all the intrigue, this exhibition tells a deeper story about the development of oil painting on canvas, still in its infancy at the time. The story transcends the usual art-history fare, if only because, spurred on by competitiveness, these artists produced such unforgettable images.

Veronese's extraordinary, and quite atypical "Temptation of St. Anthony," for instance, shows the bearded saint writhing on the ground, his body diminished by dramatic foreshortening. A satyr holds him down and threatens to strike with a horse's hoof. His rippling torso dominates the composition. But behind him is a serene young woman (she could be out of Vermeer) with one exposed breast and - yikes! - clawed fingers that calmly stroke St Anthony's palm. St Anthony clings wisely to his Bible.

But there's not a Bible in sight in Titian's "Danaë," which depicts a recumbent beauty being ravished by Jupiter in the form of a shower of gold. This nude was painted for the pope's nephew, Cardinal Alessandro Farnese, and allegedly given the features of the cardinal's girlfriend.

You can only marvel at Titian's thick, shimmering atmosphere, which seems to warm and caress her body, and at the medium of oil paint itself, which makes it all so convincingly real. The cardinal's representative, Giovanni della Casa, saw "Danaë" on Titian's easel, whetting the cardinal's appetite in a letter that said it would make Titian's earlier nude, the "Venus of Urbino," look like a nun by comparison.

Where Tintoretto and Veronese tended to be hectic, Titian understood silence, restraint. Look, for instance, at the arrangement of carefully spaced, exquisitely mute objects on the crisply creased tablecloth in his "Supper at Emmaus." The painting hangs between two versions of the same subject by Tintoretto and Veronese - the Tintoretto explosive and off-kilter, the Veronese cramped and centrally focused.

Then go back to the Titian and breathe in the atmosphere of the landscape behind: the slice of sky with streaming rain clouds irradiated by the setting sun, the building on the hill at far right, light glinting off one wall.

This solitary building and Ranuccio Farnese's young face somehow seem all of a piece.

As he aged, Titian loosened his brushwork and worked in darker tones, perhaps in answer to Tintoretto's innovations. The final room gives us a chance to see how far all three artists pushed the idea of the brushstroke as a personal signature. The paintings in it are filled with spiritual turmoil and consciousness of death.

The final work, fittingly, is Tintoretto's great late self-portrait from the Louvre. The young firebrand is now a droopy-eyed veteran of exhausting struggles, all too aware of his waning powers, but secretly confident, one suspects, that he has achieved greatness.