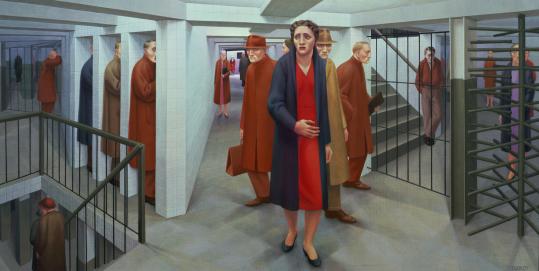 HARTLAND, Vt. - George Tooker, the Vermont-based artist enjoying a late and unexpected return to favor, had his first success in the late 1940s just as abstract painting was gaining ascendancy. The art world's center was shifting inexorably from Paris to New York, where artists like de Kooning, Pollock, and Rothko were smearing and splattering paint onto big canvases, exciting a new critical language that made painting sound like an arena of Homeric combat.

As the clamor around abstraction increased, Tooker felt "out of things," he says now.

In many ways his early success belies this. He lived in New York, mixed in giddy creative circles, and was included in prestigious shows like the Museum of Modern Art's "Fourteen Americans." He was right in the thick of it.

Yet "action painting" was not for him. He said in a 1957 in terview that he wanted to paint "reality impressed on the mind so hard that it returns as a dream.

"But I am not after painting dreams as such, or fantasy," he added.

His most famous painting, "Subway" (1950), which adopts a stretched-out, horizontal format to depict a claustrophobic scene of haggard commuters in a New York train station, has become an icon of postwar alienation. (It might easily have been called "No Exit" or "Nausea" after the play and novel by Jean-Paul Sartre.) Another powerful painting from 1957 was given the purgatorial title "Waiting Room."

He has painted dozens of other contrived but richly suggestive scenes, some of them loaded with menace, others drenched in a warm and almost mystical sensuality, but all painted in a manner combining the placid monumentality of Piero della Francesca with modern detailing, rich color, and a love of geometry.

Now 88 and a recent winner of the National Medal of Arts, Tooker seems perfectly content to feel "out of things." Even as a retrospective of his work moves from the National Academy Museum & School of Fine Arts in New York to the Pennsylvania Academy of the Fine Arts in Philadelphia (where it is up through April 5), he is spending the winter in a cramped little cottage in Vermont, living a life of Franciscan simplicity.

He has been living more or less like this since 1960, when he and his lover, the painter William Christopher, left the whirlwind of New York and built a rudimentary house on a piece of craggy farmland scattered with birch trees near Hartland.

They used to spend the winters in Spain. But when Christopher died there in 1973, Tooker returned to Vermont at the end of the following year, converted to Catholicism, and more or less stayed put.

Today, hard of hearing, he has difficulty moving around and his milky blue eyes seem to lack focus. He no longer paints - he quit that several years ago - and is helped with appointments and other daily practicalities by loyal friends and neighbors. But with slightly pursed lips, he speaks lucidly of the past in soft, clearly enunciated syllables.

Tooker actually toyed with abstract painting in oils in the 1950s. "But Reginald Marsh [his early teacher] told me, 'Don't shift to oils - your egg paintings are more distinguished,' " he says.

Tooker believes he spent much of his youth doing what he felt he should do. Raised by his Anglo-French-American father and Spanish-Cuban mother in Brooklyn Heights and Bellport, N.Y., he went to school at the Phillips Academy in Andover. From there, he attended Harvard University ("which I didn't like; I wanted to be going to art school") before enlisting in the Army during the war - another thing he never wanted to do.

Even when success came to him as a painter, he had to struggle to make things work on his terms, rather than be dictated to by others. This went for his private life as much as for his art, and for a while there in the '50s, the two got awkwardly scrambled.

In 1944, the painter Paul Cadmus started coming to Marsh's art classes in New York. Cadmus's influence on Tooker as a painter was crucial. Not only did Tooker follow him by using tempera in a more tightly controlled manner (Marsh's style was looser), he gained the confidence to use the medium to address contemporary social themes.

He also became Cadmus's lover. The problem was that, as Tooker puts it now, "Paul was still [the painter] Jared French's lover." Not only that, but French was married.

"I had to defer to the Frenches," Tooker explains, with a strange combination of ruefulness and detached amusement. "I eventually told Paul I wanted to find someone to commit to me. When I met William, I told Paul, and he understood."

Kirstein was responsible for having him included in the MoMA show, "Fourteen Americans" (his inclusion was so last-minute, he says, "that I didn't make it into the show's catalog"). But again, Tooker had to battle to be his own man.

Kirstein, who was Cadmus's brother-in-law, "sort of took over," he explains. "He was the one [at a later date] who coined the term 'magic realism.' I wasn't so keen on the label. I had a show coming up, and he was to write the catalog. I rebelled. I got another person to do it. I didn't want him to put his seal on things. He sort of felt that he owned that kind of painting."

Although he didn't convert to Catholicism until 1976, three years after Christopher's death, Tooker claimed in 1989 that "religion was always implicit in my work."

His father was a devout Episcopalian, his mother "almost an agnostic" with a Cuban Catholic background. As a young man, he was sensitive to intolerance, and admired the writings of Dorothy Day in the Catholic Worker. Writing in the show's catalog, Robert Cozzolino, the curator of modern art at the Pennsylvania Academy, noted that Day drew attention to issues of injustice and bigotry that the mainstream press preferred to ignore and "grounded her moral stance in spirituality."

Just as, in Catholicism, images are expected to inspire the viewer to spiritual action, Tooker hoped from very early on that his visual parables - he called them "protest paintings" - would have a moral effect.

Some of these paintings, such as "Supper" (1963), which shows a black man blessing a loaf of bread in a scene recalling the biblical theme of the "Supper at Emmaus," were influenced by his experience with Christopher, who was actively engaged in the civil rights movement.

Today, when asked why he stopped painting them, he says, "I just felt they'd run their course. I didn't have anything more to say." Asked whether they had the kind of effect he desired, he laughs: "I don't know that they had any effect at all!"

Gradually Tooker's themes became less explicitly social and more frankly spiritual. His light, in paintings like "Woman with Oranges" (1977), and "Embrace of Peace II" (1988), came to be suffused with warm oranges and yellows that seem not just to reflect light but to generate it from within.

Certainly, there is something anachronistic about Tooker's work. There always was. To be painting in egg tempera in the painstaking manner of Piero della Francesca just as Pollock was treating the canvas as a physical arena for self-expression akin to a dance stage seems almost willfully contrarian. But figurative artists like Tooker and abstract painters like Pollock may not have been as diametrically opposed in the postwar years as they appear to us now.

Cozzolino, talking by phone from Philadelphia, believes "the idea that they were in different camps and philosophically unbridgeable is in many ways just a product of the critics - and especially Clement Greenberg," the influential champion of American abstract painting.

In fact, he says, all these artists - both abstract and figurative - were constantly shown together in important exhibitions during that period. Tooker looked a lot at de Kooning, shared an interest in spiritual transcendence with artists like Rothko and Barnett Newman, and an interest in seriality and replication with minimalists like Donald Judd.

Moreover, the reverence for Piero della Francesca was hardly exclusive to Tooker and his circle. A veritable Piero cult had arisen in the postwar years. Tastemakers and artists as diverse as Kenneth Clark, Bernard Berenson, John Pope-Hennessy, Aldous Huxley, and even Philip Guston were all preoccupied with Piero's art, in part because its remote classicism functioned as an antidote to the chaos and carnage of the war years, and to what Clark called "the frenzied and fitful character of modern painting, its lack of settled conviction and need for stronger stimuli."

Piero met a craving for what the Renaissance art historian Berenson described as "the inexpressive, the ungrimacing, the ungesticulating." His "ineloquence," wrote Berenson, "his unemotional, unfeeling figures, behaving as if nothing could touch them, in short his avoidance of inflation,. . . in a moment of exasperated passions like ours today, rests and calms and soothes the spectator."

All this chimes with the early art of George Tooker, except that Tooker surrounded his "ineloquent" figures with a disturbing atmosphere of social anxiety.

What you notice as you look closer at the late paintings, however, is a turn away from the theme of isolation toward a new emphasis on touch, on physical embrace, on expressive gestures and faces and beneficent light. The stillness, the monumentality are still there. But Tooker's figures are now "in touch" with each other, in every sense of the phrase.

GEORGE TOOKER: A RETROSPECTIVE At Pennsylvania Academy of Fine Arts, Philadelphia, through April 5. 215-972-7600.