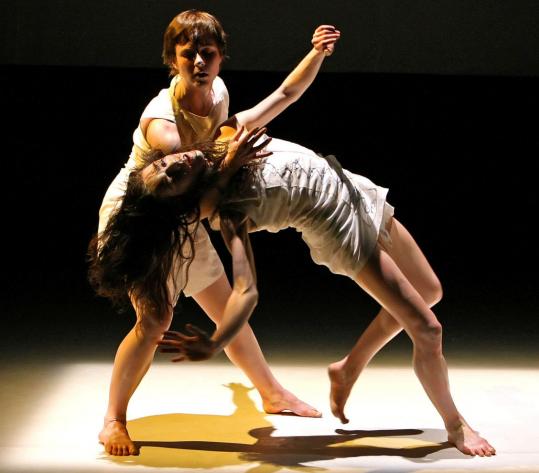 The Zoe Scofield/Juniper Shuey multimedia dance collaboration "the devil you know is better than the devil you don't" is one of those bewildering pieces that demands total engagement in the moment, but sends you out the door wondering "What was that?" all the way home. Given its Boston premiere over the weekend by the Seattle-based husband and wife team and their company, it is unapologetically confounding, yet insidiously memorable, like a crazy dream you just can't shake. At the center of it all, there's a furious little heart that pumps equal parts vitriol and grace.

The tension of group dynamics underlies interactions between Scofield, a distinctive, compelling mover, her four excellent professional dancers, and a capable ensemble of 10 student dancers from the Walnut Hill School (Scofield's alma mater), who function as quiet observers and corps de ballet. Small groups form and dissolve. Leaders and followers emerge and disappear. Often one dancer breaks rank for bursts of individual expression, the loner outcast.

Beyond that, it may be more satisfying to let context go and revel in Scofield's provocative choreography and Shuey's eye-popping visuals. (Morgan Henderson contributes a thick, often abrasive electronic score.) The opening moments are riveting. As Shuey casts a shower of snow-like light on a sheer screen, a figure in white slices, kicks, and turns like a rogue snowflake. Distorted electronic figures streak across the screen, like fleeting ghost images.

When a square of light illuminates Scofield, sitting on the floor, she's all torso, arms and legs lost in shadow. She unfolds in a kind of violent birthing, limbs jutting forth with jagged, unnatural angles in bursts of energy. Her solo is a tour de force of isolations and contortions, as if periodically jolted by currents of electricity.

As the other dancers enter the fray, Scofield's thorough grounding in ballet shows, not just in steps - elegant leaps and arabesques, pointed articulate feet - but in the formal clarity of ensemble movement in vivid, coherent patterns. But Scofield also draws from modern dance, Butoh, even yoga, juxtaposing luxurious stretches and graceful spins with flat-footed walks and a repeated march-like rocking in deep plie. The corps leaps like gazelles then skitters on all fours like monkeys. A playful trio dissolves, leaving one dancer manically twitching. Energy shifts on a dime.

Only occasionally do the dancers seem to make actual human connections, guardedly touching one another, faces registering shock or consternation. As one dancer slowly walks offstage, her back foot hooks around the neck of another dancer rolling behind her on the floor, gently pulling him along.

By the end, with simple white tunics replaced by costumes featuring colorful tattered tails, the dancers are like exotic birds strutting, diving, spinning, stomping. The confetti Shuey rains down on them looks silvery in the air. But as it clumps into dark patches on the floor and sticks to the dancers' sweaty backs, it resembles nothing so much as ashes.

At: the Institute of Contemporary Art, Friday night