No give and take for ART in 'Endgame' 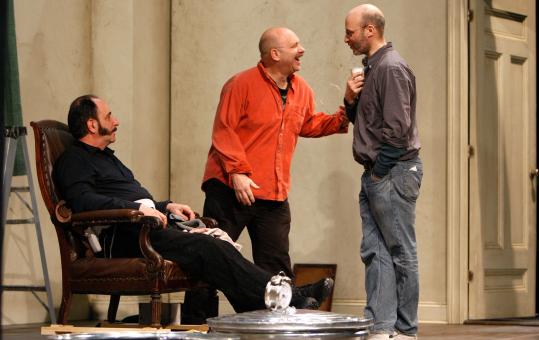 He's exhausted, Stern says, and so are his actors. But that's the price one pays for staging "Endgame," a challenging play by a Nobel Prize-winning playwright who was obsessed with making sure his scripts were followed exactly as written, line by line, movement by movement - even after he died.

"We had to sign a contract with the estate that we'd stick absolutely to the letter of the script," says Stern by phone during a rehearsal break for the American Repertory Theatre production, which starts previews tomorrow. "We are literally coloring inside clearly drawn lines by Beckett."

But 25 years ago it was a very different story: Beckett, then 76, threatened to halt an ART production of "Endgame" after he discovered that the stage direction was very different from what he'd written.

The clash captured national attention, shining a spotlight on theater politics: Who gets the last word? The playwrights who author a work, or the directors who interpret and stage it?

Beckett wanted the ART's 1984 production killed or his name taken off the program.

In his dark 1957 comedy, Beckett specified that the set should be a bare room with two small windows. Inside are Clov, Hamm, and Hamm's legless parents, Nagg and Nell. The parents live inside ash bins, Hamm is blind and chair-bound, and all three depend on Clov, a servant, to feed the family. Clov longs to desert the others, leaving them to die. But using grim humor, they recall better days and anything else to keep the isolation and possibility of death at bay.

Instead of Beckett's simple room, director JoAnne Akalaitis planned to stage the ART production in a postapocalyptic subway station with dark puddles, an abandoned train car, and a sign indicating that the space had once been a fallout shelter. Akalaitis wanted to add a musical overture composed by ex-husband Philip Glass, which was not in the script. And she hired two black actors, raising another objection.

During rehearsals, word of the changes reached Barney Rossett, president of Grove Press, publisher of Beckett's plays. He told Beckett, whose licensing firm sent a telegram refusing permission for the production to proceed.

In a letter, Rossett also elaborated on some of the objections, suggesting that Akalaitis's directorial choices made the play address "the plight of the homeless" and the issue of miscegenation.

"I was really astonished," says former ART artistic director Robert Brustein in a recent phone interview. "Beckett was a playwright who we revered. We were shocked. We had black actors in the cast playing the parts of Ham and Nagg, and we were most upset about his objection to that."

The ART was prepared to fight.

"There was not a single word cut," Brustein points out. "The only thing that was changed was the stage direction. Everything else he wrote had to be religiously followed. It was hurtful."

"It was a cliffhanger," Brustein recalls. "We didn't think we were going to be able to open. A ruling from the court said that we can. And he let it go on, very reluctantly."

But as an agreed-upon condition, Beckett wrote a statement and had it attached to the program.

"Any production of "Endgame" which ignores my stage directions is completely unacceptable to me," Beckett wrote. "The American Repertory Theatre production which dismisses my directions is a complete parody of the play as conceived by me. Anybody who cares for the work couldn't fail to be disgusted by this."

Brustein attached his own statement: "Samuel Beckett's plays are among the most powerful documents of the modern age - but except in published form they are not etched in stone. . . We believe that this production, despite hearsay representations to the contrary, observes the spirit and text of Mr. Beckett's great play."

In the end, the production sold out, Brustein says.

"He managed to get us publicity," Brustein cracks. "Beckett certainly didn't trust anybody, and once he gave you his trust he'd do anything for you. But if you didn't get it he was wary and mistrustful of you. That was just the way it was."

This time around, there will be no radical changes. In fact, the deal signed by the ART and Beckett's estate (he died in 1989) was that they follow the script to the letter: Every dramatic pause, every step and deep breath is scripted.

"The play says, look, life is short and often tough, but with grace and laughter and empathy we can make our situation a lot better for each other," says Gideon Lester, director of the ART's 2008-09 season. "The circumstances of these characters is absurd and unbearable, but Beckett looks at death and responds by writing a clown show - a vaudeville at the end of the world."

It's not easy to pull off, says Stern, who at first thought the directions would be limiting. But instead he says he finds it deeply challenging and exhilarating.

"It's very labor intensive and really exhausting," he says. "The task is really hyper-focused, but it's also very interesting getting the mechanics down. Normally it would be frustrating, but there is a great faith he's such a great writer that it will pay off to strictly adhere to his description."