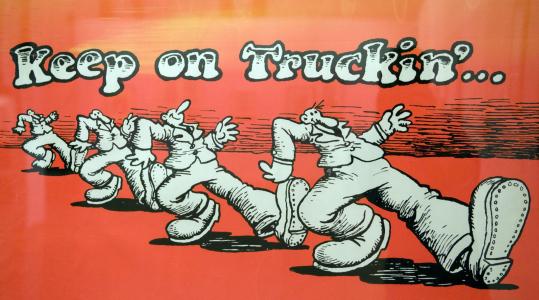 ''Keep on Truckin''' by Robert Crumb is part of the exhibit ''R. Crumb's Underground'' at the Massachusetts College of Art and Design. (PHOTO BY TOM GRIGGS; COURTESY OF ERIC F. SACK)
By Sebastian Smee Globe Staff / February 13, 2009
Text size – +

In 1996, Kitchen Sink Press of Massachusetts published a little volume of raunchy drawings by Robert Crumb, a hero of underground comics, called "Art & Beauty Magazine." The drawings, mostly of the kind of buxom, thick-thighed girls in rude health long favored by the notoriously scrawny and bespectacled Crumb, were accompanied by written descriptions ("this study shows a beautiful girl in a frolicsome mood. . .") as well as heady quotes about the nature of art by people like Kenneth Clark, Friedrich Nietzsche, and John Berger.

One drawing, to give you an idea, shows, from behind, a big-bottomed girl with pigtails pushing off on her bicycle. The commentary below: "Despite the relentless drive towards the elimination of the object in modern art movements, the female form continues to demand attention."

Crumb is so funny because he makes you nervous. One second his imaginings seem utterly uncensored - off-the-wall sexual fantasies, egregious racial stereotypes - and the next they are the last word in poker-faced parody. Very often, they're both at the same time; and so, disoriented, out-smarted, you have nothing left to do but laugh.

There's a superb example of Crumb's disorienting ironies in "R. Crumb's Underground," a touring survey of Crumb's work now on show in the Stephen D. Paine Gallery at Massachusetts College of Art and Design. It comes in a comic strip that sees Crumb in autobiographical mode (or as he signposts the strip, the "All about me department"), imagining a TV interview with an obsequious journalist.

In the next box, Crumb is strangling her, and the screen goes fuzzy.

People like to heap praise on Crumb, now 65, for being an unfettered id, as if he were some kind of idiot savant helplessly revealing profound truths about human nature and contemporary society. But this notion is ridiculous. Sure, he has his demons, and yes, he airs them more freely than most artists; anyone who saw Terry Zwigoff's 1994 film, "Crumb," would know that. But what makes him worth paying attention to is his way with irony.

Crumb's is not the facile, attitudinizing irony that hangs over contemporary culture like a sulphurous smell. It is the more fundamental kind - the kind that embraces the idea of a divided nature, that has a deep sense of human frailty and a hatred of cant. Crumb doesn't posit answers to the human mess; instead he affirms it, in all its craziness, and invites us to laugh at the spectacle.

Rightly regarded as the founding father of American underground comics, Crumb got going in the late '60s. He was famous for selling his own self-published book "Zap Comix," from inside a baby carriage that he pushed up and down San Francisco's Haight-Ashbury district. He was deeply embroiled in that decade's counterculture, and titillated by much of what it gave rise to: the sex, above all, but also the whole topsy-turvy social circus ushered in by the hippie revolution.

Never for a moment, however, did he buy into that era's utopianism - all that peace, love, and transcendence. Undoubtedly, it insulted his intelligence. But more than that, it was entirely counter to his wallow-in-the-muck temperament. "He turned on," wrote the critic and Crumb admirer Robert Hughes, "but he didn't tune in, much less drop out."

It includes brazen, all but unpardonable creations like "Angelfood McSpade," an African woman in a grass skirt, and "Mr. Natural," a hippie whose credulous girlfriend is almost seduced by a corporate fascist type.

"People have no idea of the sources for my work," Crumb has said. "I didn't invent anything; it's all there in the culture; it's not a big mystery. I just combine my personal experience with classic cartoon stereotypes." No doubt he's right, but the combination is unusually combustible.

Along with the famous strips based on Crumb's crazy cast of characters, the show also includes one-off drawings for magazine covers (many of them unpublished), an array of collaborations with peers like Rick Griffin, Spain Rodriguez, Harvey Pekar, and wife Aline Kominsky-Crumb, and more recent forays into mainstream publications, such as a 1994 cover for the New Yorker. Most delightful of all is the series of 30 wooden spools, each one illustrated with one of Crumb's inimitable human faces, displayed in a glass case.

Is Crumb a great draftsman? It's so not the point, but for what it's worth, he's fine. I love his inimitable manner of drawing for its chunky muscularity, its flexibility, and the pervasive impression of grime and human strife produced by his staccato hatching style.

To compare him to the likes of Rembrandt and Goya, as some are wont to do, is to get carried away: Crumb is too mired in male adolescent preoccupations and too reflexively wry to match their depths. But a modern Hogarth or Rowlandson? Why not?

In the end, of course, historical comparisons like these have something ridiculous about them, and Crumb knows it. As Todd Hignite, the rather breathless curator of this show, acknowledges, Crumb has been taken up in the art world precisely because his cartoons and comic strips offer an antidote to stereotypical ideas about modern art, including its so-called "relentless drive towards the elimination of the subject."

Crumb, sowing maximum mischief, pandered to such notions in Art & Beauty Magazine (not in this show) by drawing - among much similar subject matter - a girl in hot pants and boots bent over and peeking at the viewer from between her legs.