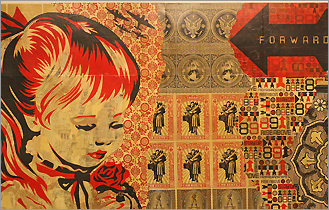 "Question everything," urges Shepard Fairey, and so, dutifully, one does - beginning with: Is it possible to be painfully earnest and sizzlingly cool at the same time?

And then: Could it be that graphic design is better than fine art, because more people take notice?

And not least: Can a street artist with 14 arrests under his belt establish his own clothing line, receive letters of gratitude from an American president, and show in a swish art museum, all without losing his countercultural cred?

"Supply and Demand," the expansive installation of Fairey's deliriously chic activist art opening today at the Institute of Contemporary Art, tests these propositions, and many more besides, to the max.

I loved it. The ICA's galleries have been transformed for the occasion and bobble now with so many eye-catching works of such variegated scale that the smallish, boutique-like galleries seem suddenly vast and enveloping.

The show has been well over a year in the planning. But now that it's open, it feels almost scorchingly timely. Fairey, a 38-year-old street artist, graphic designer, and political activist, came to prominence in the early 1990s with his "Obey Giant" campaign of stickers, stencils, and posters. But as seemingly everyone now knows, he also designed the posters in red, white, and blue of Barack Obama, emblazoned with the words "HOPE," "PROGRESS," and "CHANGE," that were used in the president's election campaign. (A glass display case here contains, alongside the artist's tattered black sneakers, a silkscreen stencil, and a cover of Time magazine, a typed letter from Obama: "I am privileged to be a part of your art work and proud to have your support," it reads.)

Only a relatively recent blip on the art world's radar, Fairey appears to be riding not just a popular swell but a veritable tsunami of cultural change. His smart, peppy, decoratively frenetic visuals are as ubiquitous as you can get without buying up great swaths of advertising space (and these days who has the money for that?).

More than any other artist of his generation, except perhaps Banksy, a fellow street artist from Britain (described by Fairey in the catalog as his "favorite artist"), Fairey has managed to capture and shape public consciousness. And that, for a visual artist, is no small thing.

And yet in many ways Fairey is so right-on it hurts. Here's a guy capable of celebrating the linguistic theorist Noam Chomsky with a street poster that reads, in part, "I lived with the system and took no offence/until Chomsky lent me the neces sary sense"; a man who talks humorlessly about the "semiotics of consumption," "empowering yourself," and "making a difference."

The last show of campaign posters and silkscreen portraits I saw was "Andy Warhol: Pop Politics" at the Currier Museum of Art. Unsurprisingly, Fairey cites Warhol as a major influence, and his show is packed with Warhol appropriations.

But Warhol, despite his repeated flirtations with politics, remained morally uncommitted as a matter of principle (if that's not a contradiction). Can anyone imagine him getting his mouth around phrases like "semiotics of consumption" or even "making a difference"?

Being cool in Warhol's day meant combining personal originality with staunch impassivity. Fairey has neither. He is at once puppyishly enthusiastic and, as a personality, somewhat saccharine. (If Warhol were a beverage, he'd probably be Pernod; Fairey is more like Frangelico.)

More than anything, then, Fairey's success demonstrates that eight years of civic deterioration under the presidency of George W. Bush have made former criteria of cool irrelevant. For the first time since the '60s, moral earnestness is not incompatible with being hip.

The election of Obama may be the strongest proof of this. Fairey's campaign poster resonates so powerfully because it is the perfect visual distillation of the new reality. It's sleek, suave, unfussy, and determined to make a difference.

Fairey may not come across as terribly cool himself, but his work sure looks cool. Combining authoritarian chic from Russia, China, and Japan with '60s psychedelia, First World War propaganda, '50s advertising, album cover art, the Pop Art styles of Warhol, Barbara Kruger, and Roy Lichtenstein, and - above all - gorgeously rampant patterning, Fairey has the graphic designer's knack of the instant hit, along with an ability to convert quick glances into longer looks.

The idea, incidentally, that his free and usually unacknowledged appropriations of others' work is somehow immoral seems preposterous half a century after Lichtenstein, Warhol, and Co. We live in an atmosphere super-saturated with imagery; appropriation is like the resulting precipitation - inevitable, perhaps even necessary from an artistic perspective.

He superimposes a unity on his eclectic borrowings by restricting his palette largely to red, black, and white. (The result is that the whole show feels like a stage set for an unusually resplendent White Stripes video.) And in line with the street art convention of tagging, he also "brands" his work with motifs that make him instantly identifiable to those in the know - in particular, the radically simplified Andre the Giant's head and the word "OBEY."

Both have been part of Fairey's work for two decades and both, he says, are deliberately vague. The original Andre the Giant sticker, he wrote, "has no meaning but exists only to cause people to react, to contemplate and search for meaning." Similarly, the word "OBEY" is intended to provoke questions ("Obey whom?," "why?", "says who?") rather than signify anything specific.

It may be made for reproduction, but in the flesh, Fairey's works have a seductive, palimpsest-like shimmer. Get up close to the version of the Obama campaign poster on display here, for instance, and you see Obama's stiff-jawed, determined gaze superimposed over a dazzlingly intricate collage of patterns and newsprint.

In more recent, large-scale works such as "Commanda," "AK-47s," and "Arab Woman," the decorative patterning is taken to vertiginous extremes, conjuring the horror vacui, or fear of empty space, associated with traditional Arab ornamentation. But Fairey's main graphic components remain crystalline, the compositions sturdy and monumental, so the eye senses a clear hierarchy of visual cues.

Fairey's DJ-like sampling of historical styles and motifs and his love of all things retro make his work reminiscent of the grab and twist of fashion and pop music, both areas he loves.

Graphic design is so central to our culture - through advertising, branding, propaganda, news dissemination, and other forms of public communication, including street art - that one welcomes the chance to see brilliant, multilayered examples of it at audacious institutions like the ICA.

How is it different from so-called "fine art"? Confronted with an artist who has done so much to tear down conventional categories of visual expression, it seems churlish to draw a distinction. But it is no criticism to say that graphic design favors pre-existing signs and symbols over less cliched forms of expression. Speaking in a language others recognize and understand is simply a better way of communicating with the greatest number of people.

What is lost, perhaps, is a certain intimacy, and an ability to communicate private experience. For all its smarts and all its seductiveness, there is not even a whiff of private experience in Fairey's work, which is why, although I'm attracted by what he does, I don't really feel he is talking to me.