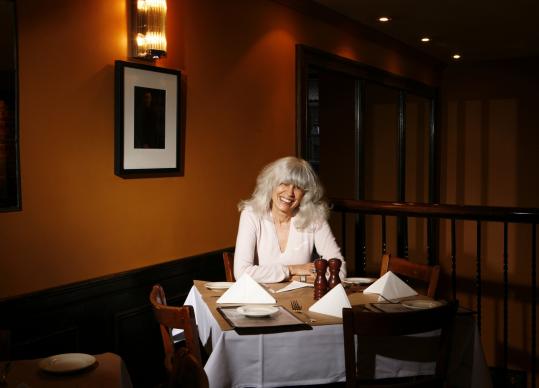 Eleanor Bergstein says she was motivated to go forward with a stage adaptation of the movie after the Sept. 11 terrorist attacks. (Elizabeth Lippman for The Boston Globe)
By Meredith Goldstein Globe Staff / February 1, 2009
Text size – +

NEW YORK - It's hard to imagine that anyone would have ever been able to put Eleanor Bergstein - the real Baby - in a corner.

Bergstein, who wrote and produced the 1987 hit film "Dirty Dancing" and now brings us "Dirty Dancing - The Classic Story on Stage," is strong and articulate. She's an optimist who fights for what she believes in. She came of age in the 1960s, after all.

"I was named for Eleanor Roosevelt," Bergstein says with pride during lunch at a midtown restaurant near Broadway. "I've worked in political campaigns my whole life."

For many "Dirty Dancing" fans, the film was a simple love story about a young woman who falls for her dance instructor at a Catskills Mountain resort. But to Bergstein, who wrote the screenplay based on her own experiences vacationing with her family (she was a "teen mambo queen"), it was always much more.

It was a film about liberals and class struggles. "It's a film about community," says Bergstein. "The subtext of the whole thing is that Johnny is a working-class boy. Baby, she thinks affirmative action is great but she doesn't understand 'union.' "

It may be subtle in the film, but the movie's narrative was supposed to take place during one specific week in 1963, Bergstein says - the same week in August that Martin Luther King Jr. gave his "I Have a Dream" speech. She notes that the vacationers who in the movie visit a fictional resort named Kellerman's were, in real life, highly political. They held vigils for victims of sit-ins. They were a middle-class, mostly Jewish group that fought for equal rights.

The movie's politics play a greater role in Bergstein's reprise of the "Dirty Dancing" story, which makes its East Coast premiere at the Opera House on Saturday. In "Dirty Dancing - The Classic Story on Stage," audiences will get a healthier dose of what it meant to live during the era of sit-ins and protests.

Yes, the show has all the iconic romantic moments from the movie, including the hot-and-heavy dance numbers, the scene in which Baby carries the watermelons, and of course the climax, when Johnny lifts Baby into the air. But there's also talk of war, racism, and class. Characters sing "This Land Is Your Land." Baby and Johnny fight about the right to vote.

Who knew "Dirty Dancing" was so deep?

Bergstein, who lives with her husband in New York, is what you'd expect Baby would be like 50 years later. She still has a graceful dancer's body. She is maternal, especially when speaking about her cast, but also youthful. She won't confirm her age, but reports place her at 70. Her most defining physical attribute is her hair, which is stylishly shaggy and white.

Bergstein says she was motivated to go forward with a stage adaptation of the movie after the Sept. 11 terrorist attacks. Two years after the tragedy she was at a Bruce Springsteen show at Shea Stadium, and like the rest of the audience, she was overwhelmed. When she looked around the ballpark and watched people react, she decided she wanted to bring her show to the stage and get a similar response - the shared feelings, emotion, and hope.

She began writing the script, and by 2004, it was set to open at the Theatre Royal in Sydney. She had connected with an Australian producer, and she is full of praise for Australian dancers, particularly the men, who she says have a tendency to be quite masculine - like Johnny, who, of course, was played in the movie by Patrick Swayze.

Bergstein's pick for the stage Johnny was Josef Brown, a leading dancer with the Sydney Dance Company. At first, Brown was hesitant to leave the company for "Dirty Dancing," but when Bergstein asked him why he started dancing, he admitted the movie had an influence.

"It made it OK to dance," Brown says by phone from Chicago, adding that the Boston audience should be prepared for his version of Johnny, which is a bit tougher than Swayze's. "I think he'll appeal more to the men in the audience," he says.

The show had its US debut in Chicago last fall. Talk about good timing, Bergstein says. It was the ideal city for a show about politics, change, and celebration. The night of the presidential election, one of the dancers came out beaming and in tears, Bergstein says. The cast quickly knew why.

"They had won Ohio," says Bergstein, who left Chicago at the start of the "Dirty Dancing" run to campaign for President Obama in Pennsylvania.

"We're all hanging around a campfire and someone's singing a Woody Guthrie song and suddenly it becomes 'We Shall Overcome,' " he says.

It's an odd thing, Epstein continues, considering that many people in the audience are there because they're nostalgic for the 1980s, when the film came out - a time that Epstein sees as antipolitical. Still, audiences that have come to hear such classic lines as "Nobody puts Baby in a corner" and to see those famous dirty dances - particularly the women - seem to connect to the subtext, he says.

"There are still a lot of women who feel like they've been put in a corner by somebody," he says, noting that when Johnny delivers that line, the audience always erupts. "That howl - it's not just purely romantic, it's really about society."

Songs from the soundtrack are also woven into the production, whether they're played by the resort band, jukebox style, or sung by cast members. Ticket holders will get to hear "(I've Had) The Time Of My Life," Otis Redding's "These Arms of Mine," and the song that plays before the movie's love scene, Solomon Burke's "Cry to Me."

Bergstein says fans will get what they always wanted - "Dirty Dancing" in the flesh.

"They want to be there when it's happening," Bergstein says of her audiences, who up until now have "hit against the flat screen." "You're walking into a third dimension. You're seeing it happen."

DIRTY DANCING - THE CLASSIC STORY ON STAGE At: the Opera House, Saturday through April 12. 617-931-2787, www.broadwayacross america.com/boston