'Green' building is bright and beautiful 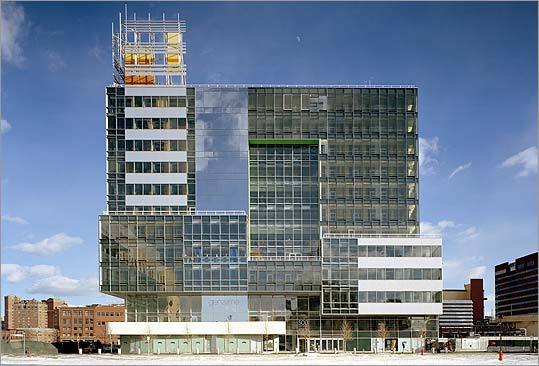 Is architecture a branch of sports?

Not really, but like everything else - elective politics, for instance - it has its sporting side. There are winners and losers, champions and prizes, strategies and promotions.

Every year about this time, a recent Boston building is declared the winner of what amounts to the annual Boston championship. It's picked as "the most beautiful piece of architecture, building, monument or structure within the limits of the City of Boston or the Metropolitan Parks District."

The words are those of an architect named J. Harleston Parker. Back in 1923, he established a prize called the Parker Medal, which has been bestowed each year since.

This year's Parker winner is the Genzyme Center, the headquarters of a major biotech company, at 500 Kendall St. near MIT.

Genzyme's building achieved instant world fame among architects in 2004 when it formally opened, mostly for its many so-called "green" features. The architect was Stefan Behnisch, based in Germany. Behnisch is also now the architect of Harvard's stem-cell laboratories in Allston.

I've always thought Genzyme was marvelous, probably the best office space ever created in or near Boston. But the Parker is administered by the Boston Society of Architects, which appoints a new selection jury each year. And as usual, this year's jurors fought over their choice.

They argued at length, says architect David Hacin, who chaired the jury, over the definition of the world "beautiful" (always a problem in architecture). Besides Genzyme, there were three other finalists: the Macallen Building, a condo complex in the shape of a dark mountain in South Boston, by Office dA; the Shapiro Campus Center, a student social center at Brandeis, by Charles Rose; and the new WGBH headquarters and studios in Brighton, by the New York firm the Polshek Partnership.

You can tell people disagree about architecture from the fact that none of last year's Parker runners-up - there were four - even made the finals this year. Last year's winner was the new Institute of Contemporary Art on the South Boston waterfront.

"We thought Genzyme has stood the test of time," says Hacin of the building, which opened five years ago. "When we visited, we were struck by the atmosphere indoors, especially in the atrium. It was like being on vacation. The air, which felt fresh and good, the quality of light, the buzz of activity. . . It was the atmospherics that put it over the top."

He adds, "There was also the subtext of its influence. It raised the bar for private-sector leadership in environmental design, and its influence on the new environmental regulations on buildings in Boston and Cambridge was exceptional."

When it opened, the Genzyme Center received a platinum rating, the highest LEED score (the letters stand for Leadership in Energy and Environmental Design), from the US Green Building Council. The council called it "one of the most environmentally responsible buildings in the country."

Genzyme is a 12-story building, with an exterior mostly of glass. It features a number of environmental ideas. Up on the roof, moving mirrors track the sun and direct its light down into the building's atrium, which rises the full height of the interior. A "chandelier" of translucent tiles hangs in the atrium, absorbing light and refocusing it elsewhere.

Computer-controlled window blinds open and close depending on the outdoor light level. Some energy is provided by waste steam from the nearby power plant. There's a roof garden, there are solar panels, there are toilets you can choose to flush for high volume or low. Some of the building exterior is a double wall, two surfaces with a walkable space between, providing extra insulation.

What's most striking about Genzyme, though, is the way all these green initiatives work to make the place a physical and social delight. In and around the atrium, for example, there are 18 hanging gardens, all different. They not only generate oxygen, they ease the eye and offer restful places for quiet conversation. There are coffee kiosks on every floor. Eventually, a public restaurant will open at street level. A young Boston firm, Next Phase Studios, collaborated with Behnisch on the interiors.

Genzyme's developer was former Cambridge city councilor David Clem and his firm Lyme Properties. The building is one piece of a larger project built on a former industrial brownfield site. In a commendable attempt at quality, Clem worked with Toronto urban designer Ken Greenberg and landscape architect Michael Van Valkenburgh on the overall plan. He then organized architectural competitions for four of the individual buildings. In each case, several architects were paid to make designs from which a winner was chosen. (One, a biotech lab by California architect Steven Ehrlich, is itself a crisp architectural gem in buff ceramic tile and blue-green glass.)

Lyme has now sold the whole development. As a result, one of the best ideas, the extension into the site of an old industrial canal with a new boat launch, probably won't be implemented. A performance center, part of the initial plan, now seems doubtful in the current economy. But Harvard, MIT, and Mass. General are co-sponsoring new housing at the development's edge, and it's to be hoped that some day a busy mixed neighborhood will surround the Genzyme Center.

One more thing about sports. Sports is all about statistics, so here's just one on the Parker Medal. The architect who's won it the most often - five times - is the firm of Kallmann McKinnell & Wood. KMW is still active in Boston and designs, today, relatively conservative buildings. But KMW's first Parker, which arrived in 1969, was for Boston City Hall. And City Hall was recently nominated, by a travel agency nobody seems to have heard of before, as "the ugliest building in the world."

I guess we're still arguing over the meaning of "beauty."

Correction: Because of an editing error, the wrong photograph accompanied Robert Campbell's column in the Jan. 18 Arts & Entertainment section about the Genzyme Center winning the Parker Medal. A photograph of the center is above.