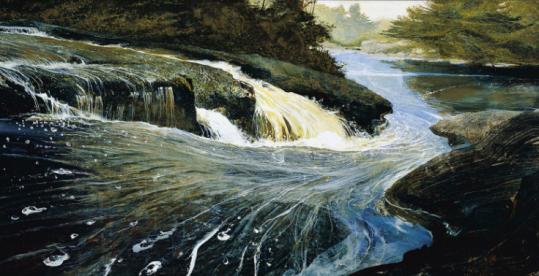 "The realization is long overdue that Wyeth is neither Satan nor Jesus," the art historian Robert Rosenblum wrote in 1987. "He is merely a mortal and genuine artist."

These may have been the sanest words ever written about Andrew Wyeth, whose popularity was fueled by the perception that he was a polarizing figure.

He was and he wasn't, just as his paintings were neither bad nor particularly good. But the perception suited him. It increased the indignation of his champions, conveniently ignoring the fact that his art had few truly strenuous detractors.

It's not hard to understand why. Wyeth won plaudits out of all proportion to his achievement. In 1976, he became the first living American artist to be given a retrospective at the Metropolitan Museum in New York. He was lionized by the popular press, his images became icons, and his works routinely sold for millions of dollars.

Was all this a fluke? By no means. Wyeth's realism, which sat comfortably within an American tradition pioneered by the likes of Winslow Homer and Thomas Eakins, reassured a postwar public alienated by abstraction and other strains of avant-garde art.

His attachment to pristine rural environments connected with a strain in American sensibilities that sentimentalized life on the land and the values of austerity, rectitude, and simplicity that went with it. It acted, perhaps, as an antidote to the increasingly rampant consumerism and the chaotic, yabbering energy of the modern American polis.

Above all, the cool, secretive sexuality of his work and its controlled insinuations of the gothic incited prurient interest while remaining firmly within the bounds of good taste.

Disapproving critics compared Wyeth's dry, crisp surfaces to dead leaves. But the surfaces were the inevitable result of his favored mediums - egg tempera and drybrush watercolor (in which the moisture is squeezed from the brush) - and they matched the emotional mood of his paintings, which was insistently parched, lacking both carnal sweat and atmospheric humidity.

Wyeth beguiled many by alternating between thin-lipped sobriety and extravagant melodrama. His most famous image, the Museum of Modern Art's "Christina's World" (1948), is a case in point. The setting is a parched field with a distant, lonesome house: One thinks of Edward Hopper. But the protagonist is a disabled woman, pinned to the ground, her body plaintively inclined toward the building.

It is an image of dramatized pathos and as peculiar today as it was when it was painted 60 years ago. It became a kind of trademark of American art. But where trademarks tend to be smart distillations of an unambiguous message, "Christina's World," despite its familiarity, remains thoroughly odd.

Wyeth's mass popularity, or brand recognition, soared when the "Helga pictures," depictions of a model and muse called Helga Testorf, came to light in 1986. The collector Leonard E. B. Andrews (who died just two weeks ago) bought 247 of these paintings and studies, which had purportedly been made in secret over a period of 15 years. (In fact, Helga pictures had been sold and reproduced since 1979).

Andrews, who bought not just the works, but the copyright, too, was quoted as describing Wyeth as "the incredibly finest artist to come out of America in the 20th century."

The Picasso biographer John Richardson, on the other hand, wrote that "Wyeth's tasteful blend of puritanism and nostalgia, verisimilitude and storytelling, epitomizes what a lot of WASPs and would-be WASPs expect in art." Those expectations included, he wrote, "a sentimental relish for the underprivileged."

I am more with Richardson than Andrews. Wyeth was a fine painter of light; he specialized at conveying contrasting textures (long hair and fields of dry grass, woodpiles and weatherboard), and he produced some admirable portraits. His finest paintings were lifted out of the ordinary by a haunting sensitivity to the emotional effects of open space.

But he also peddled in kitsch. His painstaking technique had something mildly self-congratulatory about it, and the world he conjured was too pristine by half.