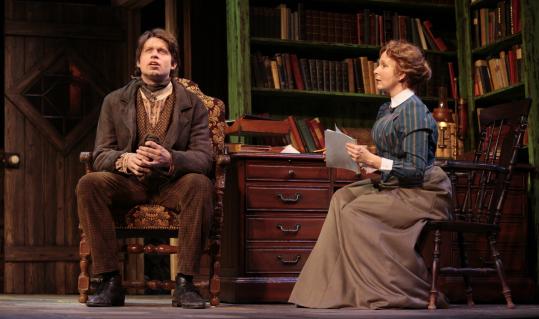 Nicholas Martin's lovingly crafted, heartwarming revival of "The Corn Is Green" was one of the highlights of the 2007 season at the Williamstown Theatre Festival. Now Martin has brought the show to the Huntington Theatre Company - the company he left last year to become artistic director in Williamstown - and it's every bit as satisfying on a cold winter night as it was on a balmy summer day.

Emlyn Williams's play about a tough young miner and the shrewd, firm schoolteacher who unearths his literary talents is a solid, sturdy, and unabashedly old-fashioned piece of work. Martin's direction, suffused with a rich sense of the 19th-century Welsh setting and an equally rich appreciation of the characters within that world, brings out all the best qualities of this style; in his hands, "The Corn Is Green" feels classic, not dated.

Martin has recast many of the smaller roles for the Huntington - in part to welcome such local stalwarts as Will LeBow and Bobbie Steinbach - but the sentimentally and artistically powerful magnets at the center remain intact. Kate Burton, whose father, Richard Burton, chose the playwright to be her godfather, plays Miss Moffat opposite her son, Morgan Ritchie, as the literary miner, Morgan Evans.

Maybe it's partly the effect of their familial ties to the play and to each other, but mostly it's their own artistry that makes their work together a real pleasure to watch. Burton is charming, intelligent, and spirited as Miss Moffat, while Ritchie burns with a quiet, intense power as Morgan. If anything, his characterization seems a little deeper here, with a more adult sense of just how far Morgan will travel if he realizes his teacher's dreams of Oxford for him, but he's also still got an adolescent energy that makes him a believable schoolboy.

LeBow contributes an understated, wryly amusing portrayal of the dull-witted Squire, a role that could easily slide into beefeating caricature if overplayed. Instead, LeBow makes him an essentially affable if obtuse country gentleman, so that Miss Moffat's eventual recruitment of him as a supporter of Morgan's ambitions feels less like a self-contradiction than like the discovery of previously hidden generosity and perception - exactly what you'd expect a fine teacher like Moffat to bring out in everyone she meets.

Kristine Nielsen is a hoot as the plainspoken pickpocket-turned-housekeeper, Mrs. Watty, though she and a few others are occasionally hard to hear clearly. It's not immediately obvious whether that's an acoustical shortcoming of the Boston University Theatre or a side effect of the many heavy accents in the play - Cockney for Mrs. Watty and her scheming daughter (brought to glittering life by Mary Faber), standard British for Miss Moffat and the Squire, Welsh for everyone else.

Occasional missed lines, however, are a small price to pay for what the pervasive Welsh flavor adds to the production. Folk songs recorded by various choirs introduce each scene, and there's intermittent background chatter in incomprehensible but musical Welsh. All of it deepens and enriches our sense of this tiny village as a real but distant place, and it sharpens our sense of the long journey that lies ahead for Morgan.

James Noone's rustic, comfortable parlor looks as inviting here as it did in Williamstown, while the newly designed costumes by Robert Morgan seem slightly less fussy but no less authentic than the originals. More important than any one detail of the production, however, is its essential heart. And that, happily, beats on, as steady and warm as ever.

THE CORN IS GREEN Play by Emlyn Williams