Looking at Chekhov anew, ART breaks with tradition in its staging of 'The Seagull' 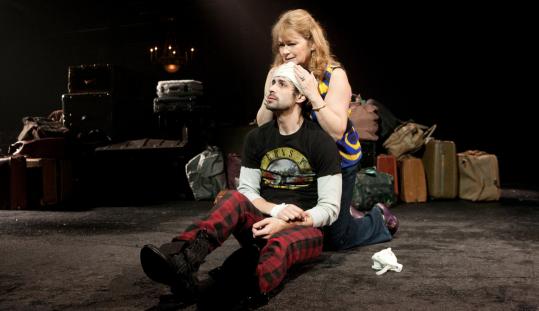 CAMBRIDGE - No samovars, no fluttering white dresses, no peasant tunics: Janos Szasz's production of "The Seagull" at the American Repertory Theatre quickly banishes any thought of Chekhov cliches. Instead it's set in a dank, eroding tunnel/basement/cave with puddles on the floor and crumbling icons on the walls, something Szasz has said he means to evoke an abandoned theater 200,000 years from now.

It's strange. It occasionally threatens to slide into self-parody. But, in its eerie beauty, its mysterious shadows, and in fact in its very strangeness, it works.

Because, let's face it, the mind of Anton Chekhov can be a pretty damn strange place, too.

Chekhov's weirdness glides by us sometimes, because it's matched by a psychological acuity that leaves us gaping at the precision of his insight into his characters, rather than shaking our heads at the odd ways in which their stories and their psyches can evolve - especially in this tale of unrequited loves that's also a profound dissection of the relationship between art and life. And a historically faithful production can further lull us with those linens and samovars; we imagine we're watching curious figures from the past, not real eccentrics like the ones who live in our neighborhood or in our own skin.

By alienating us from all that, Szasz and his design team paradoxically bring us closer to the characters, in all their fascinating and peculiar detail. Plunked down in a soggy cavern, stripped of their historical trappings, Chekhov's egotists and neurotics and depressives emerge as specific, human people we might know.

Take Masha. Her self-dramatizing, melodramatic speech at the play's opening (though it's not quite the opening here; more about that in a minute) makes perfect sense when she's dressed as a kind of punk teenager. "Why do you always wear black?" her suitor Semyon inquires, and the answer is as obvious to us as it is to her: Because it suits her sense of exaggerated misery; because it's extreme; because she's desperate to feel something, even if it feels bad. We could know all that from an actress dressed in a black Victorian gown, but it comes across at a more visceral level when she's a familiar type from our own time.

Such transpositions wouldn't work - in fact, they often don't, in less thoughtfully "modernized" productions - if they were done glibly or with excessive literalism. But what Szasz has done is to create a strange new world for Chekhov's play and also to pay careful, deep attention to the emotional and intellectual depths of the text. He's not just messing with it for the sake of showy effect; he's reimagining it in order to remain true to his understanding of its deepest essence.

Which brings us to that beginning. Szasz starts not with the first lines of the play, between Masha and Semyon, but with the troubled young writer Konstantin alone onstage, cradling a rifle. He's sitting on a row of dilapidated theater seats, which will form the chief furniture of all the scenes, but all we can focus on is him and his gun. Slowly he raises the barrel to his mouth, and then the lights go out. And then we get the play.

That image haunts what follows, though, as do other images that recur at key points throughout. Gradually it becomes clear what Szasz is up to: He's showing us Konstantin's world through Konstantin's own troubled mind. It's Konstantin, after all, who asks his audience to imagine a world 200,000 years from now, in the dreadful Symbolist play that he stages for his mother and her worldly friends. Szasz doesn't ask us to find that play-within-a-play any less awful than it is, but he does provoke our sympathy for the unhappy young man who has written it and who is devastated by its failure.

The look and feel of this production - Riccardo Hernandez's decaying set, Christopher Akerlind's gloomy-glamorous lighting, David Zinn's aging-rocker costumes, and David Remedios's sometimes jarring, sometimes bluesy sound design - all work organically with Szasz's concept, and it's a measure of their success that, after the first few surprising minutes, they start to feel almost normal. We stop thinking about the setting and start focusing on the characters.

And it's here that the production fully succeeds, because Szasz elicits powerful and astute performances from just about everyone. Mickey Solis is a hauntingly miserable presence as Konstantin, and Brian Dykstra is blandly, freezingly selfish as Konstantin's mother's lover, Trigorin. As for that mother, Irina Nikolayevna Arkadina, Karen MacDonald captures both her flirtatious charm and her fatally oblivious self-absorption. Every moment, every line of her performance adds another stroke to this fascinating portrait of a maternal monster.

That, in short, is what makes this production work. It has a strong overarching idea, to be sure, and one that's not what you'd expect. But within that framework it has real, careful, and exciting work by skilled actors working in concert. That's what theater needs - now, and no doubt 200,000 years from now, too.

THE SEAGULL Play by Anton Chekhov, translated by Paul Schmidt