'Sanctuary' exhibits the brilliant variety of clothing from the Muslim world 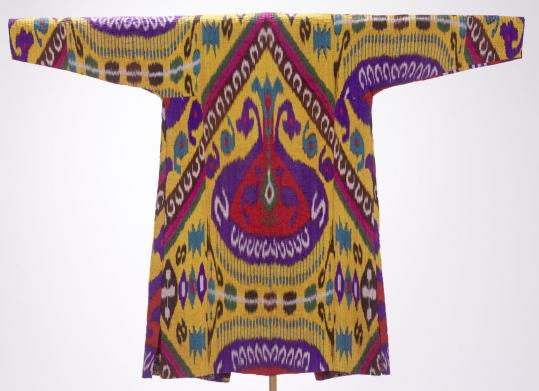 PROVIDENCE - White, because it signifies modesty, humility, and piety, is what Muslim pilgrims wear to Mecca. White has nothing to hide. "The best of your clothes are white," said the Prophet Mohammed.

But if this suggests to you that a show about clothing traditions across the Islamic world might be a sterile and colorless affair, think again. For over the centuries, Muslims have also embraced a counter-tradition that accommodates various amounts of pomp and ostentation. "When God bestows benefaction upon one of his servants," says the best-known expression of this tradition, "He wishes the physical sign of that benefaction to be visible on him."

In a small but eloquent display at the Rhode Island School of Design Museum, "Sartorial Sanctuary: Clothing and Tradition in the Eastern Islamic World" examines both the restraint and the sumptuousness of customary Islamic dress.

The exhibition, organized by assistant curator of textiles and costumes Kate Irvin, begins and ends with two stereotypical items of clothing. The first, which kicks off the half of the exhibition devoted to men's clothing, is a red-and-white checked headcloth, of the kind lately associated with the slur "towelhead."

Worn all over the Arabian peninsula, it's a style of headwear that predates Islam: The red and white pattern is an abstraction of Mesopotamian motifs for fishing nets and wheat, while the "agal," or rope, used to keep the cloth in place evolved from camel hobbles used by the Bedouins. It may be ubiquitous now, but it only replaced the turban as the dominant form of Arab headdress in the mid-19th century, and for reasons more to do with national identity than religion.

Ending the section devoted to women, meanwhile, is a full-length dress overlaid by a face-covering veil that extends to the waist. It was bought in Afghanistan shortly before the Taliban came to power. Designed to cover as much of the body and face as possible, it is typical of the outfits many Westerners perceive as grossly repressive to women.

How strange, then, that the outfit is in a shade of purple that would put a Roman cardinal to shame, and that the dress is pleated in a way that Issey Miyake might admire.

It turns out that these two garments were bought in 1977 at the Kabul Intercontinental Hotel by Dr. John N. Loomis, who donated them to the RISD Museum. Loomis estimates that 90 to 95 percent of the women he saw in Kabul that year were heavily veiled and that, of these, most wore black, brown, and beige. However, about a quarter of them wore bright colors such as this, and many of the garments were fancily pleated.

The contentious veil, it turns out, was originally an item of dress imported from India or Persia, and was long associated with the prerogatives of the urban upper class (veils require more fabric, and more fabric means more expense). Ever since, veils have been alternately enforced on religious grounds or freely chosen. What this outfit makes possible to see is why a woman might choose it.

What I love about Islamic design, in clothes as in textiles, is the combination of sumptuousness and restraint. The best of it seems to hold the two opposing impulses in perfect equilibrium, so that even as we feel seduced by extravagant materials or rhapsodic ornamentation, we feel conscious of a withholding impulse, or a concern for harmony that suggests a kind of spiritual restraint.

One marvels to learn, for instance, that even as great industries producing some of the world's finest, most luxurious textiles developed in the Muslim world in the centuries after Mohammed's death, curbs continued to be imposed by custom: Silk, for instance, in some cultures, could be worn and displayed but should not touch the skin.

Likewise, it is fascinating to learn that it could take months to collect enough camel hair for the expensive man's cloak, or "bisht," on display here. And yet, apart from its subtle gold trim, the garment is plainest brown and completely devoid of fuss.

One ravishing display case contains three cloaks from far-apart cultures, each connected by the ancient trade route known as the Silk Road. One is Syrian, another is from Morocco, and the third is from India. All are in modest shades of white or cream but decorated with arabesques, palmettes, and other vegetable patterns, mostly in glittering gold brocade. The effect is of a continuous beauty, at once uncentralized and infinite, that possesses a spiritual dimension for anyone willing to see it.

Several items here are simply among the most beautiful items of clothing I have seen. (Interestingly, most of them - but not all - were designed to be worn by men.) One is a 19th-century man's robe from Kashmir. The fabric is brown goat hair, but it is embroidered with an evenly distributed field of flowers of astonishing variety and resplendent color.

Another is a recent version of one of Uzbekistan's most famous and distinctive products, the "chapan," a quilted man's robe made from fabric that is tie-dyed before weaving (the technique is called "ikat"), creating blurry, bleeding-edged patterns. The robe here was made in 2000 by Yulnara Atanaazarova. It is dominated by two hues: an ethereal purple and a flaxen yellow, complementaries that are lent luster by localized outbreaks of turquoise, red, and hot pink.

Muslims have a saying: "Lilah al-baqi," or "what remains belongs to God." Visible beauty, in other words, has the right to be extolled, but only to the extent that it reveals its own fragility, its transience. The only permanent reality, or "baqa," is invisible.

This belief, so fundamental to Islamic aesthetics, helps to explain why many Muslim expressions of beauty have an ephemeral quality. They feel playful or weightless, as if relieved of gravity, in all its senses. They often find their most beautiful expression in forms that are similarly ephemeral - in carpets and silks that can be folded up and put away, or in clothes, which may be worn one day and tossed in a chest the next.

That said, if I owned the 19th-century Egyptian woman's robe, or "yelek," on display here I would do my utmost to keep it on permanent display. This long, slim outfit bearing evidence of Ottoman influence (the Ottomans conquered Egypt in 1517) is embroidered with red, blue, and gold silk flowers arranged in taut, vertical columns and looks, to me, unbelievably suave.