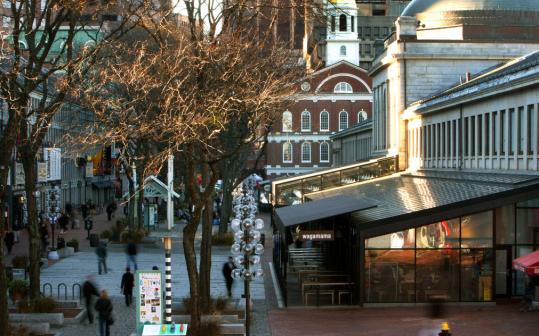 The good news is that a Boston building has just won one of the most coveted awards in the world of architecture.

The bad news is that the building, Boston's beloved Faneuil Hall Marketplace, is in limbo and facing an uncertain future.

The award is called the Twenty-five Year Award. It goes to only one American building each year. The building must be at least 25 years old, and it must have "stood the test of time" in the words of the sponsor, the American Institute of Architects. In other words, it must have proved to be an architectural classic. I don't think any prize is more highly valued by architects.

The Marketplace is unlike most winners of this award in that it isn't a new building. The architect, the late Benjamin Thompson, conceived the idea. He renovated three blocks of old warehouses, built originally in 1826, into a new kind of shopping complex that he dubbed a "festival marketplace."

It was a lively mix of dozens of small, locally owned shops and businesses in a busy setting of banners, trees, push-cart vendors, and street performers. The historic buildings gave you a sense of living in Boston's past and present at the same time.

In its press release, the American Institute of Architects sings of the Marketplace in very up-to-date language. It's called "a great model of vital environmental principles" and praised for "creating a high-density urban environment where people can work, shop, play, and enjoy life as pedestrians."

The problem is the owner, General Growth Properties of Chicago. GGP is flirting with bankruptcy. The company bought too heavily and too fast in the recent real estate boom, thus piling up debt. It acquired the Marketplace in 2004 when it paid $14 billion, most of it borrowed, to acquire the , the original developer. Altogether, General Growth owns 200 regional shopping malls with 25,000 retail stores, including the Natick Collection and Providence Place.

GGP is frantically working to restructure its debt, but there's no guarantee of success. Faneuil Hall Marketplace, in all likelihood, will soon go on the block. How that might play out is very much an uncertainty.

Jane Thompson, Thompson's widow and business partner, sounds the alarm. "The whole place should go on the National Register of Historic Places," she says. "We broke a lot of shopping mall conventions when we put new life into a historic property. We created a place for small local specialty merchants."

She fears that corporate developers will want to take advantage of the site to build something bigger here. "But it was the Marketplace that created the value of the site in the first place."

It's not only the Marketplace. A cloud of doom seems to hang over the legacy of architect Thompson, who died in 2002. Another Thompson building also won the Twenty-five Year Award, in 2003, and it, too, is in limbo. This is the retail building at 48 Brattle St., originally built for a store Thompson founded, Design Research, and now occupied by a Crate & Barrel. Cambridge old-timers still speak of the DR building.

Crate & Barrel has given notice and will soon move out. The building's owner, developer William Poorvu, is looking for a new tenant. We should all care who occupies this marvelous building, because it is conceived as a five-story glass showcase, faceted like the surface of a diamond. The facade is so transparent that the merchandise on display indoors becomes part of the architecture. DR, with bold Marimekko fabrics, solved that problem perfectly, and Crate & Barrel hasn't done badly. But who will step up to the plate now? I'm voting for Apple.

The Thompson carnage doesn't stop there. In New York, another Thompson festival marketplace, the South Street Seaport, is under serious threat. The owner is again General Growth. The company proposes to demolish much of Thompson's work and replace it with small boutique hotels and one 42-story hotel and condo tower.

At the moment, the company and its architect are in discussions with the New York Landmarks Preservation Commission, hoping to reach a compromise. But with any likely outcome, Thompson's work will disappear.

I can't help wondering whether what we're hearing in all this is the tolling bells of an era that is ending. Let's go back to Faneuil Hall Marketplace. It opened back in the bicentennial year of 1976, in a very different era. Public life, street life, was moribund in Boston. So dead were the streets that few thought the Marketplace would succeed. Boston bankers refused to lend until Mayor Kevin White twisted their arms.

But the Marketplace was a huge and instant hit, drawing more visitors in its first year than Disneyland. It had arrived, it turned out, at exactly the right moment. A generation of people who had moved to the suburbs or grown up in them, and who tended to think of the city as dangerous and alien, found in the Marketplace a magic door into a cleaned-up, safe, dramatized version of city life. I called it "a halfway house for recovering suburbanites." People, it turned out, were starved for the experience of city life, even a slightly ersatz experience.

After Boston, festival marketplaces popped up everywhere, most of them done by Thompson himself with his developer, James Rouse. American downtowns and waterfronts began to come back. But there's a hidden twist in this. Once Boston, or any other city, achieved a revival, it no longer needed its festival marketplace. With shops and bars and restaurants everywhere, as they are now here, the Marketplace ceases to be a unique destination. Today, Faneuil Hall Marketplace is largely a tourist mecca. Bostonians go elsewhere.

Many of the Marketplace stores are national chain outlets now, although these were banned in 1976. Nothing about these chains speaks of Boston, a value Thompson felt strongly about. The Marketplace was in part a victim of its own success, or you could say a victim of the economic ambitions of its owners. They charged higher rents that drove away the local merchants who once gave the place its character.

Is Faneuil Hall Marketplace ripe for another reinvention, just as it was reinvented in 1976? Will someone appear who is as timely and inventive as Ben Thompson? Is the festival marketplace concept now dead? Will a deus ex machina show up to properly inhabit the DR store?

Let's hope for the best. These are two of the significant works of 20th-century Boston architecture.