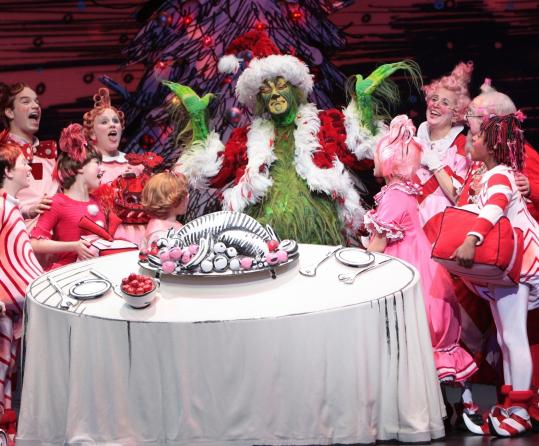 The Grinch joins the Whos for the holiday feast in ''Dr. Seuss' How the Grinch Stole Christmas! The Musical.'' (T charles erickson)
By Louise Kennedy Globe Staff / December 5, 2008
Text size – +

Every Who down in Who-ville likes "Grinch" shows a lot. But the critic, who lives just north of Who-ville, does not.

The critic hates "Grinch" shows! The whole "Grinch" show season! Now, please don't ask why. No one quite knows the reason.

First of all: I love, truly love, the original "Grinch" show, by which I mean the 1966 Chuck Jones cartoon based on Dr. Seuss' book "How the Grinch Stole Christmas." It is 26 minutes of animated bliss, hilarious and silly and sneakily profound. It is, in fact, even better than the book; it has more (and more baroquely absurd) rhymes, a more satisfying ending, some small but sweet songs along with one very funny one, and, of course, Boris Karloff. Boris Karloff in a Christmas special - sheer genius.

But then came the abominable Jim Carrey movie, a bloated, vulgar exercise in Hollywood excess. And now comes the stage musical, about which the best that can be said is: It's not the Jim Carrey movie. That is, believe me, about as faint as faint praise can get.

And the problem with the musical - to give it its full, and tellingly over-full, title, it's "Dr. Seuss' How the Grinch Stole Christmas! The Musical" - is essentially the same problem that doomed the movie. And I don't mean the hideous costumes for the Whos, though in their pink and curlicued tastelessness the stage ones are scarily similar to the filmic horrors.

The "Grinch" story was perfect in its 26-minute version, and blowing it up to the two hours required for a film, or even to the 90 minutes of the stage version that's currently at the Citi Wang Theatre, adds nothing but excess baggage. A great deal of the story's charm lies in its small scale. Take that away, and you've got nothing but too much of a muchness.

Unfortunately, Timothy Mason's book for this show piles additional problems on top of that fundamental one. In seeking a way to accommodate the narrative voice so brilliantly handled by Karloff, it reframes the story as a memory tale for . . . Old Max. Yes, the dog. He's leaving Who-ville, see (we don't learn why), and so he's looking back . . . back . . . to a time when he was . . . Young Max.

So we get Old Max, the narrator dog, and Young Max, the reindeer dog. And neither of them, it must be said, looks remotely like Actual Max. In fact, with their fluffy black-and-white coats and scruffy-yet-bushy gray tails, these humans in dog costumes look like nothing so much as refugees from some misbegotten sequel to "Cats."

And yet that might not be so bad, except that at several key moments the show rips us away from the events of the story, which we care about, to Old Max's reflections on them, which we don't. Even at the crucial moment, when the sleigh full of purloined presents is teetering atop Mt. Crumpet, there's a sudden blackout and then - Old Max in front of a scrim, singing about how he'll always remember how he feels at this time of year, "keeping all I feel, knowing that it's real, letting memories heal." Is this Dr. Seuss or Dr. Phil?

The good news is that we do, finally, get to hear the songs we actually like, "You're a Mean One, Mr. Grinch," and "Welcome, Christmas." They're too often shoved aside by unnecessary and inferior new songs, but at least they're there. And, while the new songs lack snappy rhymes and thematic punch, at least they're mostly innocuous enough.

The other good news is Stefan Karl, who delivers an all-out, energetic, crowd-pleasing performance as the Grinch. The character as scripted is less deliciously devious and much louder than the original, but Karl, with his athleticism and charisma, makes it work. He's green, he's mean, and, unlike the big and garish show that surrounds him, he's lean.

It's almost enough to make your heart grow a size or two. Almost.

DR. SEUSS' HOW THE GRINCH STOLE CHRISTMAS! THE MUSICAL Musical with book and lyrics by

with additional music by Albert Hague

Based on the book "How the Grinch Stole Christmas" by Dr. Seuss

Originally conceived and directed by: