War and love set the stage for 'Mary's Wedding' 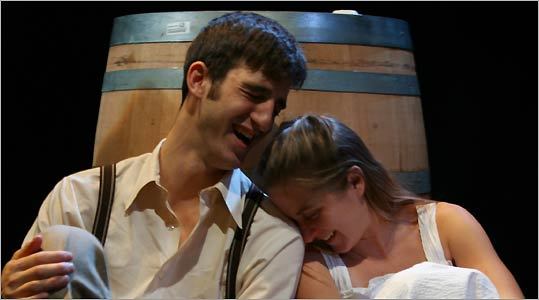 'Mary's Wedding" begins and ends in sweet dreams of love. Inextricably entwined with those dreams, however, is a nightmare of war.

In combining these themes, Canadian playwright Stephen Massicotte does nothing new; love and war may be the oldest stories we have. But they also never grow old, especially not when they are told with as much delicacy and restraint as Massicotte's play displays, in its fine local debut by in the Dark Theatre at the Boston Center for the Arts.

On a small stage, barely decorated by Emily Nichols with a couple of hay bales, barrels, and small wooden tables, the play begins with young Charlie explaining to us that we're about to watch not the wedding advertised in the title but the dreams, the night before, of Mary, the bride-to-be. The action then shifts seamlessly to Canadian farmboy Charlie's first meeting with recent British emigrant Mary, as they take refuge in a barn during a thunderstorm. We're watching the meeting, or we're watching Mary's dream of it, or both.

That shivery, shimmery ambiguity permeates the 90-minute play, to hypnotic effect. We know it's all a dream; Charlie told us so right at the beginning. But we also fall, with Mary, into spells of feeling that it's real. This structure, flexible and unobtrusive, lets Massicotte carry his story from the Canadian farmland, where the lovers meet, to the fields of France, where Charlie soon goes.

For these lovers have met in 1914, and Charlie, along with many of his countrymen, soon joins the British to fight in World War I. Mary's dream carries her along with Charlie, from the light comedy of a transatlantic crossing on a liner-turned-troopship filled with cavalry horses through the first terrors of battle and on into the slow, enervating slog of trench warfare. Through it all, though, her dreams - and Charlie's, and ours as we watch - flit back to the beginning of their love story, with an innocence that seems almost unbearable against the shadow of war.

We are less innocent than Mary and Charlie (indeed, it's hard to imagine how anyone could ever have been so innocent), and so some of these early moments feel almost cloyingly naive. Jennifer O'Connor's Mary, in particular, teeters on the edge of wide-eyed caricature, perhaps because the character's posh British accent creates a pseudo-sophisticated air that clashes with her childlike expressions.

As their story goes on, however, both O'Connor and Samson Kohanski, sweetly shy and then painfully brave as Charlie, add depth and nuance to the characters. The playwright, too, lets us see them with greater complexity, as their early romanticism gives way to painfully learned realism. Even the Tennyson poems they had recited together - "The Charge of the Light Brigade" for him, "The Lady of Shalott" for her - recur in darker ways, with their youthful sheen of glory and romance burnished by the horrors the lovers live through, whether in reality or in their minds.

Because of its very universality, Mary and Charlie's story could fall too easily into cliche. But Massicotte's quietly lyrical writing doesn't succumb, and neither does Meg Taintor's careful direction here - except, perhaps, when she uses "Ashokan Farewell," the mournfully beautiful tune that's indelibly associated with Ken Burns's TV series on the Civil War, hitting us a little too hard with the idea that all war is War.

For the most part, though, the simplicity of the staging lets us focus on these two people in love; the larger meaning of their story is there for us to contemplate, if we will, but it is not forced on us. Two people fall in love, and one must go off to war. It's an old story, to be sure, but here it is also, as it must be every time there is another Mary and another Charlie, a story that is once again told anew.

Nichols. Presented by Whistler in the Dark Theatre.