A curator of a different stripe 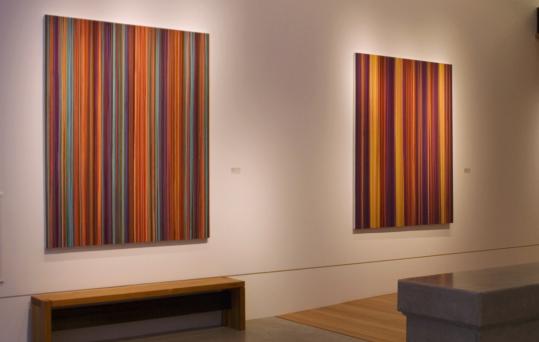 Why run one gallery when you can run three? That's James Hull's attitude. Since he closed Green Street Gallery two years ago, Hull has traveled in Italy and been sitting on the curatorial committee at Laconia Lofts, the South End building where he lives, pondering what to do next.

Now he has been tapped by architect David Hacin of Hacin + Associates and the development company Berkeley Investments to curate shows in the elegant lobby of the FP3 condo complex in Fort Point. He has also been hired to helm the Suffolk University Gallery at the New England School of Art & Design. He still oversees the exhibition roster at Laconia Lofts.

During his time off, Hull considered opening a commercial gallery, but "nonprofit and school spaces are my thing," he says, walking around the FP3 space. "I love recruiting an audience, rewarding an audience, and stitching together a network of artists."

The Gallery at FP3 makes a delicious backdrop for art: The walls reach to two stories, and the environment, with accents of wood and stone, is more inviting than a white cube gallery. Hull inaugurates the space with a small exhibit of works by John Guthrie, a technical whiz and master colorist.

The show features three large paintings from 2003 and a handful of small unique prints made this year; I'd have preferred everything to be new. Still, Guthrie's paintings are something to marvel at.

Two vertical stripe paintings, "" and "Emperor," appear to be coolly laid out geometries of color - which, given Guthrie's color sense, would have been enough. He adds strands of blue amid clusters of earth tones, or pairs complementary colors that electrify the retina. In fact, each stream of color is a rivulet of diluted acrylic paint, coursing down the canvas. Look carefully and you'll see drops veer, ramping up the works' sensuality.

For the remarkable "Serpentine Fire," Guthrie taped off hundreds of shapes, like the scales of a snake's skin, creating a painted mosaic in which snakes slither. The red groove between the cells pulsates against their blue, red, and gray; stand close, and you may have to look away, the tonal throb is so eye-boggling.

For his small gray-scale prints made from ink drawings, such as "Fallout," Guthrie layers closed circuits of white, black, and gray. Even these toy with perception, with shadows appearing to crop up at intersections. These works invite contemplation, rather than ravishment, but they're no less intriguing.

Hull includes Guthrie in his clever first show at NESAD, "Behind the Image," featuring work by seven Boston artists, surrounded by their sketchbooks and inspirational images borrowed from their studio walls. It's richly informative and perfect for an art-school gallery. It also offers a peek into some of the newest work being made by local favorites such as Guthrie, Cristi Rinklin, and Hannah Barrett.

Guthrie paints his absorbing black watercolors in bands making up a rectangle cinched at the center, with tone dispersing in fascinating textures. His workbook shows dozens of trial runs.

Barrett, known for her eerie and funny composite portraits of men and women, now melds historic faces. Two disarming drawings mesh Queen Elizabeth II and Adolph Hitler. Barrett does it by hand with collage, then draws from her best collage.

Rinklin based her eye-popping, multilayered abstract painting "Phantom Limb" in part on a Tiepolo painting, borrowing the shapes of clouds and garments. She makes a sketch, plays with it on the computer, then bases her final painting on the result. These artists go through many steps to arrive at a finished work; it's edifying to see.

Going with the flow

Laconia Gallery accepts proposals for shows from artists, schools, and other organizations. Painter Resa Blatman, fiber artist Sara Hairston-Medice, and Mary O'Malley, who makes intricately drawn works on paper, got together for "Overflow." All three delight in going over the top with intricacy, design, and texture - call it 21st-century rococo.

Blatman's work has always had tiny biomorphic clusters fluorescing through deep space, tangling with plant life and flat, decorative embellishments. In "Beauty and the Beauties," she ups the ante, painting on plastic foam core and laser-cutting ornate designs along the edges. Within, there's a dazzling mix of abstraction and figuration. Fruit bats feed, pink flamingos preen; a mushroom appears to ejaculate. It's a celebration of sensuality.

O'Malley draws elaborate designs in metallic ink, making lace-like drawings that hover between still life and LSD trip. "Haeckel's Bouquet" refers to the 19th-century naturalist who documented patterns in nature and features a glittering arrangement of designs that could be sand dollars or amoebae.

Hairston-Medice's smaller crocheted sculptures are starting points, little puckered and gathered tea cozies, but her large pieces, such as the free-standing "Flowering IV," which veers, in warm, gaudy tones, toward a feminine shape, offer more opportunities for the viewer's imagination to seize.