Where the wild things are 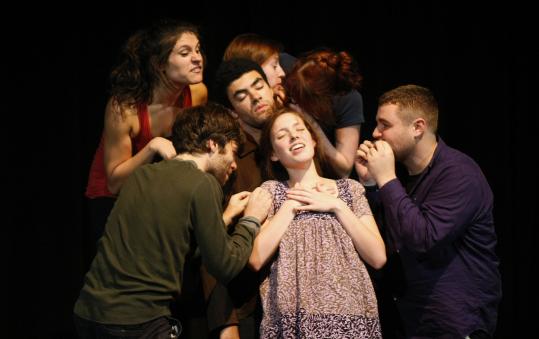 Jon Lipsky has a dream.

That, he'd hasten to tell you, doesn't make him different from the rest of us - we all have dreams. In fact, that's the basis of his dream: the dreams that all of us have, every night, in which the ordinariness of our daily lives gives way to wild epics, ridiculous comedies, mysteries, tragedies, just about every kind of drama you can think of.

And what Lipsky dreams of is making drama out of that drama - of taking dreams and turning them into theater. But he doesn't just dream it; he does it.

Lipsky, a skilled playwright and director who won a 2007 Elliot Norton Award for the piece he created with jazz musician Stan Strickland, "Coming Up for Air," has just written a book about dreams and theater, "Dreaming Together: Explore Your Dreams by Acting Them Out" (Larson Publications). Meanwhile, a group of his students from Boston University has been performing "The Wild Place," a dream-based piece that Lipsky wrote with Susan Thompson and directed earlier for the Pilgrim Theatre, at Cambridge's Central Square Theater.

The last performance of that show - a wild, funny/scary, and moving piece about pregnancy, motherhood, and birth - takes place tonight. But Lipsky and Debra Wise, whose Underground Railway Theater is (with the Nora) one of the Central Square Theater's two resident companies, hope it will be the first of many performances there that are based on dreams. They're talking about creating a "Dream Cafe," a regular event that would have actors performing theater works based on dreams in the theater's most intimate space.

"Like a jazz club," Lipsky says, "where you see a set of dreams and then, over wine or coffee, talk about your dreams. And then perhaps the actors come around and ask about people's dreams: 'Any flying dreams? Any extraordinary creatures? Anybody murder anybody last night?' "

But what he wouldn't do, Lipsky says, is have the performers enact those dreams right then and there, like improv. Instead, he'd have the actors talk at more length with a few dreamers, work on finding ways to embody their dreams, develop specific images and narratives to convey the story and mood of the dream, and then perform them later - perhaps as soon as the next night, but not before doing the real work of turning a dream into a piece of theater.

Lipsky emphasizes that point with the conviction of a man who's been doing this work for a long time, as indeed he has. After participating in a dream group led by Robert Bosnak, a Jungian psychoanalyst, Lipsky went on to adapt Bosnak's book about his experiences with one patient's dreams into a play, "Dreaming With an AIDS Patient." He has also been teaching students at BU how to enact dreams for 20 years; all his freshman theater classes conclude the year by performing a piece based on the students' dreams.

So Lipsky, both in person and in the concise, engaging pages of his book, speaks with authority about what works and what doesn't in putting dreams on the stage. He describes a detailed process that moves from having the dreamer simply tell the story of the dream to finding key images, collaboratively discovering ways to act them out, and shaping the images into a coherent piece of work.

That can be tricky. "Life doesn't have an obligation to be coherent, and neither do dreams," he says. "But that narrative thread is essential. If you've ever listened to someone drone on about a dream - especially if they do it without entering into the emotional content of it - it's deadly. It does a disservice to dreams, to psychology, and to theater if it's just thrown together."

Susan Thompson, whose dreams while nursing her first child and pregnant with her second are the basis of "The Wild Place," says finding the coherence of a piece is one of Lipsky's strengths. "What Jon does very skillfully is give that narrative structure," she says, noting that he's also "very respectful of the dreamer," making sure that the actors portray, for example, the dreamer's idea of an alligator or a mother, not their own.

Thompson is also trying to find ways to incorporate Lipsky's ideas into her other work as an actor. "What Jon is saying is that we all are dreamers and that we recognize that this language of dreams is all our language," she says. When we see our dreams onstage, "we're no longer strangers on that coast - others have seen that coastline, and we're not alone there. That's the universality of the dream language."

Lipsky has his own ideas of how dream theater might find a broader application. "What I think it would be really great for is reconciliation work," he says. And so, in addition to developing the "Dream Cafe," he and Wise are working with a theater troupe in Israel that features both Israeli and Palestinian actors.

BSO players sign new labor agreement There won't be any labor strife at The Boston Symphony...
More in Exhibitionist