This 'Merchant' trades on strong performance 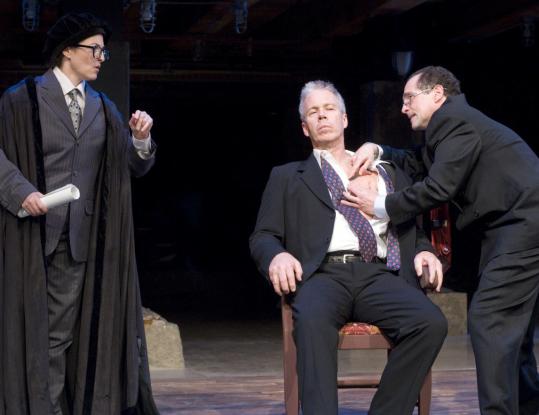 From the moment Jeremiah Kissel steps on stage, "The Merchant of Venice" belongs to him.

As Shylock, the Jewish moneylender, in the Actors' Shakespeare Project production, Kissel bristles with pent-up frustration, anger, and a bitter sense of triumph. We watch him slap his cheeks in mock horror as he listens to young Bassanio (Robert Serrell) ask to borrow money, then spy a smile twitch across his face when he learns the sum will be repaid by Bassanio's friend Antonio, the merchant of Venice who has humiliated and insulted Shylock more than any other.

When the aristocratic Antonio (Robert Walsh) arrives, the contrast between the businessmen is stark. As Antonio stands calm, cool, and collected, Shylock fumbles with his glasses, pen, notebook, and jacket, desperate to make Antonio understand the shoe is on the other foot, determined to make him feel the same humiliation Shylock has felt.

Once Kissel leaves the scene, however, this "Merchant of Venice" loses its bearings. Instead of being one play about insiders versus outsiders and the power of money to get what you want, the production disintegrates into two or three plays all jockeying for attention. In some productions, Launcelot, Shylock's servant, helps the audience through the shifting moods, but here Doug Lockwood, dressed inexplicably like Shaggy from "Scooby Doo," is funny but not helpful, as his shtick doesn't seem to have anything to do with everything else going on. Staged all around the Midway Studios' evocative, two-tiered space, the scenes never quite connect.

We begin to feel as lost at sea as Antonio's fleet. And with all the distracting visual images of money changing hands - men shooting dice, tipping each other, paying in advance - the subplots featuring Portia's suitors gambling for her hand in marriage and Shylock's daughter, Jessica (Sarah Augusta), eloping with Lorenzo (Jason Bowen) feel less like romances and more like two more business transactions.

Yes, Sarah Newhouse as Portia and Marianna Bassham as her maid Nerissa have terrific chemistry, and they are especially winning when they impersonate a judge and his clerk to win Antonio's freedom from Shylock's bond. Newhouse, in particular, infuses Portia with intelligence and spunk, combining a regal air with girlish eagerness. But there is no connection, emotional or otherwise, between Newhouse and Serrell, who comes across more like a spoiled brat than a lovesick young man desperate to do anything to win Portia. When he chooses the lead casket with the quote "Who chooseth me must give and hazard all he hath," it's hard to see the nobility in it, as we know it's Antonio who is taking the heat.

"The Merchant of Venice" is considered a romantic comedy, if a complicated one, and as long as Shylock is played as the obvious villain he can be dismissed simply as a greedy moneylender. But by encouraging Kissel to make Shylock more sympathetic and Walsh to make Antonio more detached, director Melia Bensussen makes her job of finding the play's balance more difficult. When Kissel delivers Shylock's impassioned "If you prick us, do we not bleed?" speech, we empathize with his situation. When he determines to slice off a pound of Antonio's flesh as payment for his bond "to bait fish withal," we're horrified by his madness, but equally horrified that the quality of mercy does not apply to him.

The beauty of Shakespeare's plays lies in the complexity of his characters. But until everyone here agrees on the purpose and intention of "The Merchant of Venice," this production is too disjointed to be effective.

BSO players sign new labor agreement There won't be any labor strife at The Boston Symphony...
More in Exhibitionist

THE MERCHANT OF VENICE Play by William Shakespeare