Loving care for a Brutalist giant 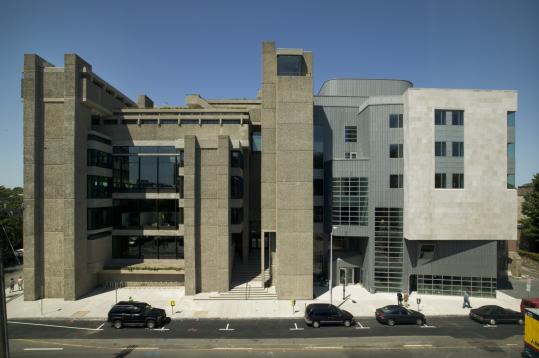 NEW HAVEN - Has there ever been an architectural style with such an unfortunate name as "Brutalism"?

Brutalism is the style of Boston City Hall, which opened in 1967. It's also the style of the Art + Architecture Building of 1963, here at Yale. Both are typically Brutalist. They're muscular, fortress-like piles of gray concrete. The name comes from the French bèton brut, meaning raw concrete.

Both buildings were greatly admired when they were new. But that's where the similarity ends, because while our City Hall languishes in the grip of a mayor who would like to get rid of it, the A + A has just been totally and enthusiastically renovated. It's even been renamed in honor of its original architect: the old A + A is now Paul Rudolph Hall.

The lesson for Boston is a simple one. A Brutalist building doesn't have to be depressing. It can be a magnificent work of architecture. It just needs some imagination, some love, and some care - exactly the benefits our City Hall has never had.

Yale had pretty much given up on the old A + A, just as Mayor Menino says he's given up on City Hall. Brutalism was out of fashion. And the A +A, designed before today's concerns with energy or access for the disabled, was difficult to use and costly to maintain. Yale, like Menino, was ready to demolish and start over.

But the dean of Yale's School of Architecture, Robert A.M. Stern, wouldn't let the building go. He asked a noted architect, Charles Gwathmey of Gwathmey Siegel in New York, to restore the A + A. This coming weekend it formally reopens with a program of lectures, tours, seminars, and an exhibit of Rudolph's work.

Architect Gwathmey is perhaps best known for adding a tower of fine new galleries to Frank Lloyd Wright's Guggenheim Museum in New York. At Yale, he has done something similar, not only refurbishing the old A + A - OK, the Rudolph - but attaching a new building next door, the Loria Center, which houses Yale's arts faculty. The two buildings are linked by new elevator lobbies, a new arts library that is partly in basement space, and new utility services, which are housed in the Loria.

Gwathmey has done a great job on the Rudolph, taking great care not to let the new Loria block views from its windows or damage it in any other way. But the Loria itself is forgettable architecture, a random collage of surfaces of limestone, zinc, and glass that don't add up to anything particularly expressive or satisfying. You can't help feeling sympathetic, though, to an architect who was faced with the task of putting something next to Rudolph Hall, a building that simply radiates power and self-confidence. And when the architect's client is a faculty of other architects, there's sometimes too much kibitzing.

I remember visiting the Rudolph when it was new and I was a student. Spatially, it was probably the most thrilling modern building I've ever encountered. It was as complicated as a 3-D chess game, or a Piranesi engraving. There were dozens of levels and half levels. Natural light poured in from the windows. An unforgettable bright orange carpet went everywhere, the perfect counterpoint to the exposed gray concrete walls so typical of Brutalism. Instantly famous, the building was a huge hit with critics.

But over the years, the Rudolph was altered in thoughtless ways that eventually ruined its beauty. Windows got dirty, concrete cracked, asbestos was torn out. Nobody claims Brutalism is cheap to maintain. A fire inside the building didn't help either.

Seeing the building again, I'm struck by its success as a social arena. Rudolph understood how to create a world that brings people together. His interior is concentric. Each major floor has a big space in the middle, often two stories high, which is ringed by studios and offices at various levels. These central spaces are the equivalent of a city's public squares: People emerge from their private quarters to meet and mix as citizens of the school.

Fame is often fleeting in architecture. Designers outlive their vogue. Paul Rudolph, in the 1960s and '70s, was as influential as any architect in the world. By the time he died, in 1997, he was half-forgotten in the US and doing most of his building in East Asia.

Recently, though, Rudolph has been the object of a preservation movement. Two fine buildings, a high school in Sarasota, Fla., and a house in Connecticut, drew a lot of attention when they were threatened with demolition. Both were eventually lost. But Rudolph's own home, an amazing all-glass (including the floors) triple-decker penthouse in New York, was saved after a similar effort. The Paul Rudolph Foundation was created in 2002 to "further the accessibility of Paul Rudolph." And UMass-Dartmouth, the campus of which is one of Rudolph's best works, now operates a Rudolph website called Paul Rudolph & His Architecture (prudolph.lib.umassd.edu).

Rudolph's career followed an odd trajectory. He began by designing exquisite beachfront houses in Florida, houses that possessed the delicate tense perfection of a butterfly or a sailboat. But when he moved north to Yale, which named him chairman of the architecture school in 1957, he began designing buildings like the A + A, burly piles of concrete more akin to battleships than sailboats.

He designed two buildings in Boston: the State Service Center on Cambridge Street, a flamboyant, castle-like pile that's way over the top aesthetically, and the gentler First and Second Church in the Back Bay. The Service Center and UMass-Dartmouth are both fashioned out of a material the architect invented. Rudolph made the walls by having concrete poured into molds that gave them a vertically ribbed surface, like corduroy. He would then have the construction crew attack the walls with hammers, in order to break chips off the ribs so as to roughen them. The result is an architecture so aggressive that people often feel nervous about even touching it.

But Yale, too, is made of corduroy concrete. And now that the concrete is clean, it often resembles a rich, deep textile, or perhaps a waterfall. It's less grim. As in the past, the gray is offset, indoors, by an ever-present bright orange carpet, and outdoors by a foil of green roof plantings.

The French architect Le Corbusier, the inventor of Brutalism, never failed to accent his work with intense color. It's one more idea I'd like to see tried at City Hall.