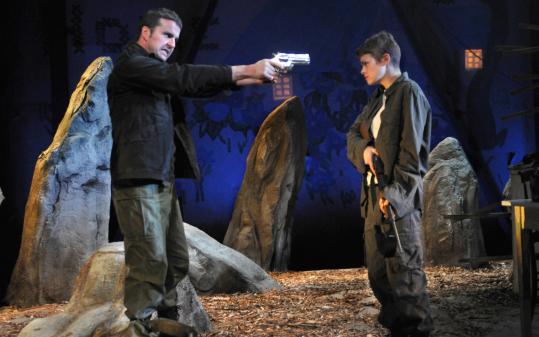 WATERTOWN - A couple of seasons ago, David R. Gammons directed an Actors' Shakespeare Project production of the notoriously gory "Titus Andronicus" that was notable, aside from its many artistic merits, for its almost complete lack of blood. Instead of spurting red dye and gaping wounds, Gammons used rocks and ropes to depict unspeakable violence.

Well, now he's directing "The Lieutenant of Inishmore" at the New Repertory Theatre, and all the blood that went unspilled in "Titus" is flooding and gushing and spattering on the Arsenal Center for the Arts stage. For what it's worth, I preferred his work dry and on the rocks.

But of course Martin McDonagh's play - hilariously brutal black comedy or two hours of bludgeoning the audience to remind us that violence sucks; it all depends on your point of view - calls for lots and lots and lots of blood. Blood is its point, its punchline, its metaphor and its reason for being.

"The Lieutenant of Inishmore" is ostensibly the story of a rogue lieutenant in the Irish Republican Army, known (with extreme understatement) as "Mad" Padraic, and of his fury when it appears his cat has been assassinated. As the mayhem increases and expands, however, it becomes more and more clear that what McDonagh's really up to, in addition to indulging his fondness for punk-rock excess, is a stinging metaphorical indictment of the self-defeating stupidity of using violent means for political ends.

Careful, though - he's also insisting, endlessly, that it's all just a big dark joke. So don't get upset by the body parts and the dripping eye sockets and the dead animals - it's a farce, see? Where's your sense of humor?

And it's true that the wretched excess onstage can be disarmingly, almost sickeningly funny; there's a kind of brilliance to the fury with which McDonagh blows his characters and his story apart. Certainly Wednesday's opening-night audience had its share of huge, disbelieving laughs, and a couple of them were mine.

For that, credit goes not only to McDonagh's razor-sharp writing, but to Gammons's skill in keeping the razor's edge poised right at our throats for the full two hours. His pacing and focus are superb, and the whole production supports and rounds out his vision of the play, from set designer Janie E. Howland's shabby cottage on a blasted heath to Gail Astrid Buckley's tatty costumes, Karen Perlow's incisive lighting plan, and Rick Lombardo's careful choices of ear-blasting punk and hard rock. Kudos, too, of course, to special-effects designer Stephen Tolin for all the blood and guts.

In the uniformly excellent cast, Colin Hamell stands out for the creepily nonchalant charisma he gives to Padraic, even as he's torturing a victim or caressing a corpse; so too does Lynn R. Guerra as Mairead, the sharpshooting tomboy who idolizes him. Karl Baker Olson is goofily earnest as Davey, the dopey local boy who Padraic wrongly believes is the cat-killer, and his scenes with Rory James Kelly, as Padraic's booze-soaked dad, Donny, hilariously blend everyday banalities with the unspeakably grotesque.

That kind of incongruity - killers chatting about breakfast cereal, household gadgets serving as implements of torture - is the engine that drives McDonagh's humor, and it does work. But if it's a clever device, it may ultimately be too clever for its own good. If it's all just a big bloody joke, isn't two hours a little long to wait for a punchline? And if it's not all just a big bloody joke, I think I'd like something more to take home than a dead cat.

THE LIEUTENANT OF INISHMORE Play by Martin McDonagh