Simulcasts of the Met have become the hot ticket among opera fans, but the impact on live performances by local companies is unclear 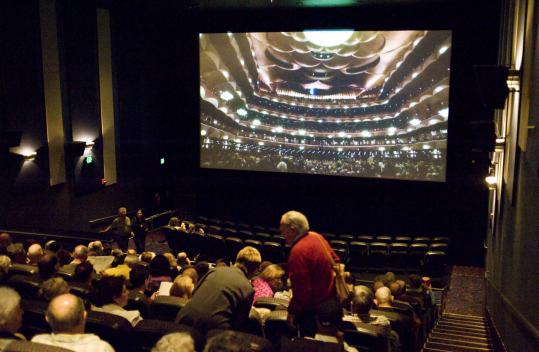 At the Regal Fenway 13 theater, opera fans settled into their seats, eager for the start of a simulcast of the Metropolitan Opera's performance of "Salome." (Wiqan Ang for The Boston Globe)
By Jeremy Eichler Globe Staff / October 26, 2008
Text size – +

Opera fans are a famously passionate bunch. On a recent Saturday at noon, a crowd of about 50 lined up outside the Regal Fenway 13, a full hour before the Metropolitan Opera's high-definition simulcast of Strauss's "Salome." When allowed through the doors, they streamed into the lobby and some kept going, right past a bewildered ticket-taker and into the theater, not yet officially open.

An usher was asked to clear out the early crowd, but he reported back that the opera fans were guarding their seats and refusing to leave.

A manager picked up a phone. "I need some help down here," he said.

Two years ago, opera simulcasts in movie theaters did not exist; today they are wildly popular. What only recently seemed like a novel, vaguely exotic cultural activity has for many become a familiar ritual on the local musical calendar.

Yet beyond the excitement it has generated, this new wave of high-tech cultural populism is also transforming the ecology of opera in Boston, where the two main companies offering live performances - Boston Lyric Opera and Opera Boston - must now grapple with what it means to have the Met juggernaut landing right next door.

There is no mistaking its momentum. Back in December 2006, only one local theater - in Framingham - screened the first Met simulcast. Last year, the number of greater Boston theaters carrying the broadcasts was up to seven, with 21,000 tickets sold. (By comparison, the combined attendance for all 18 of the Boston Lyric Opera's mainstage performances last season was about 24,000.)

This season's Met transmissions should yield even higher numbers, as three more local movie theaters have joined the network. At the same time, the broadcast series itself has expanded to include 11 opera events, running through May.

Clearly, opera moviegoers adore their new pastime. "It's fabulous," said Warren Cutler of Boston, who was seated near the front of the crowd at the "Salome" broadcast, next to a friend discreetly feasting on takeout Chinese food. "This has many advantages," he explained. "Number one, you don't have to travel to New York. Two, it's incredibly reasonable. Three, the seats are more comfortable than the Met's or any other theater. And although you miss out - even with the fabulous sound there's a certain flatness - it somehow makes up for it with some of the camera shots. It's wonderful."

Moviegoers have been known to applaud at the screen, to heatedly debate the merits of the camera work, and to relish some of the unscripted backstage exchanges that can appear in pre-performance or intermission features. They often compare notes with friends who watched the same broadcast in a different city or even in another country. Earlier this season, a group that regularly watches the Met at the Mahaiwe Theatre in Great Barrington gathered before the opening simulcast for a black-tie celebration.

How are the local companies responding to all of this? At least for now, they appear to be applauding along with everyone else, and attempting to tap into the new wave of opera energy. "More opera makes more opera lovers," said Judith McMichael, director of marketing for Boston Lyric Opera. "It gives more people an opportunity to experience this art form and get jazzed by it."

In this spirit, Boston Lyric Opera has even signed on as a co-sponsor of a new six-part series at the Coolidge Corner Theater called "Europe's Grand Operas," featuring high-definition screenings of recent performances from La Scala, the Salzburg Festival, and Teatro La Fenice in Venice. (The series continues Nov. 30 with a broadcast of Rossini's "Barber of Seville.")

Opera Boston is also trying to leverage the broadcasts to attract new audiences. It is participating in a hosting program the Met offers to regional companies, so it will be distributing its own literature at the next Met broadcast - the contemporary opera "Doctor Atomic" by John Adams, slated for Nov. 8. Opera Boston has also considered launching some book-group type programming that would encourage its own patrons to attend the broadcasts and discuss them afterward.

"It's bringing opera into popular culture," said Carole Charnow, general director of Opera Boston. "It's taking it out of that faraway place that's only for the initiated, who understand the language, who know what to wear, and who can afford the tickets. It's making the average cultural consumer begin to embrace the idea that maybe opera is for me."

To be sure, opera's silver-screen revolution is chipping away at the art form's elitist image. Last month, the Washington National Opera simulcast its season-opening performance of "La Traviata" on the Jumbotron at Nationals Park for a crowd of 15,000.

And yet, using the broadcasts to build new audiences is not a simple task. According to a recently published survey of the Met simulcast audiences across the US and Canada, only about 5 percent of the attendees had never been to an opera before. The series, in other words, is primarily attracting opera-oriented fans. "I would say that reaching out to prospective audiences is the next frontier in this effort," said Marc Scorca, president of Opera America, which published the survey.

One complication is that, in many locations, you cannot simply walk off the street and decide to watch an opera at the movies. Most tickets (usually priced at $22) are snatched up by hardcore opera fans far in advance. In fact, the hunt for tickets has become its own breed of challenging cyber-sport, especially for less computer-savvy operagoers who find themselves wrestling with confusing websites. Those who succeed often choose to buy tickets for the entire season at once. And tickets at certain theaters are so tight that many fans will go as far as purchasing memberships to the Metropolitan Opera Guild (at $125), in order to ensure access.

Within a few years' time, there may actually be more opera seen at the movies than in live local performances. Even so, Charnow sees the two as fundamentally different experiences. "I stubbornly believe that live music and live theater provide a cultural service that cannot be provided by television or film," she said. "In a film theater, you may be emotionally drawn in but it's essentially a passive act to watch a film. To be in a live performance, it's an active act."

The Opera America survey appears to support Charnow's intuition. According to Scorca, many audience-members reported "that the HD experience does not replace their appetite for attending opera in person."

Meanwhile, back at the Regal Fenway 13, Boston resident Drayton Freeman was standing in line, happily trilling about his new passion. "I've been to see them in Randolph and Revere," he said. "The first one I saw was [Gounod's] 'Romeo and Juliet' last season and it was spectacular."

Freeman is one of the statistical few who discovered opera entirely through the broadcasts. He's now a member of the Met Opera Guild, and plans on attending all 11 of this year's simulcasts.

How about an actual live performance one day?

"I've never been, but I'd very much like to actually go to the Met in Manhattan," he said.

Asked about attending live opera locally, he sounded a bit less enthusiastic but still open to the possibility. "I'd consider it," he said.

Jeremy Eichler can be reached at jeichler@globe.com