Mad, Vlad, and dangerous to know 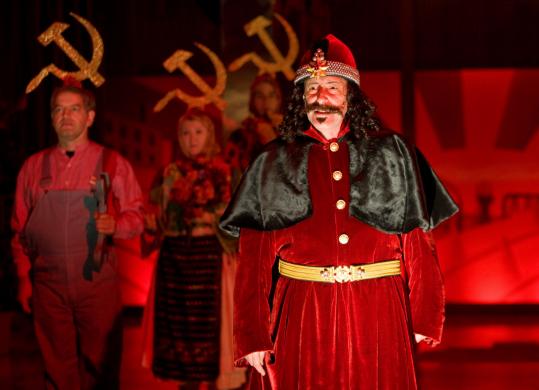 CAMBRIDGE - It's easy to understand what stirred the dramatic imagination of playwright Anne Washburn as she contemplated the history, both recent and ancient, of Romania. What's more difficult to grasp, at least on a first viewing, is where her imagination has taken her.

Washburn completed the play, "The Communist Dracula Pageant," in 1999, 10 years after the revolution that ended the bloody, surreal reign of Nicolae and Elena Ceausescu. Now, almost a decade further on, the American Repertory Theatre is giving the play its world premiere at the Zero Arrow Theatre, in a production that has moments of hallucinatory fascination, chunks of historical exposition, and a persistent but sometimes incoherent subtext about the uses and abuses of power.

Some hint of the play's texture, of its strengths as well as its weaknesses, comes from its full title: "The Communist Dracula Pageant - by Americans, for Americans; a play about the Romanian Revolution of 1989 with hallucinations, phosphorescence, and bears." Note the insistence on supplying precise historical data, the equal insistence on striking a faint note of whimsy - those bears! - and the implication, without elaboration, of a current, local subtext for this story of another time in another country. It's all in the title, in microcosm, and it's what crowds the stage - sometimes to fine dramatic effect, and sometimes to no effect so much as chaos and confusion.

Well, you might argue, revolutions tend to be chaotic and confusing, and the mysterious, sudden chain of events that toppled the Ceausescus is no exception. But, especially in a play that's "by Americans, for Americans," it would help to bring a greater order to the chaos - to tell a story of confusing and almost unbelievable events, rather than simply to throw the chaos at us.

It would also help to think through more carefully just what Washburn is trying to say about dictators who abuse power, about cruelty, about human nature; by emphasizing that this is an American play, she seems to be making a point about American politics, but just what that point is never becomes explicit. It's a political reference without political analysis.

At the same time, paradoxically enough, the play could use more chaos - or at least more of the surreal juxtapositions with which it begins. Inspired by having read that the Ceausescus staged pageants in 1976 to commemorate the 500th anniversary of the death of Vlad the Impaler (the Romanian dictator who's the historical basis of the Dracula legend), Washburn dramatizes one such pageant, complete with peasants in hammer-and-sickle headdresses, a cartoonishly idealized version of Comrade Elena, and Vlad himself.

The scene is funny, awful, and vivid - just what you'd expect from a "Communist Dracula Pageant." And whenever Vlad reappears onstage, as he does several times, his velvet-robed presence lends an appealingly creepy-silly note to the unfolding story of the self-deluding Ceausescus and the people who eventually overthrew them.

Vlad's presence is also appropriate, in part because Nicolae Ceausescu apparently saw himself as an heir to the man he considered a heroic patriot, and in part because of the more obvious links between Vlad's blood-drenched legend and the equally gory history of Romania under the Ceausescus. Washburn further links Vlad to the regime by having the same actor double as a "Functionary" in that regime - and, here, Will LeBow makes effortless moves from the overt bloodlust of the vampiric Vlad to the more quietly parasitic but no less frightening apparatchik.

LeBow's fellow ART veterans Karen MacDonald and Thomas Derrah deliver equally strong performances as Elena and Nicolae Ceausescu, with extreme wigs and unflattering makeup nicely enhancing their resemblance to the corrupt dictators. (Elena's Halloween-worthy gray lipstick is an especially appropriate touch for a woman who's sharing the stage with a vampire.) A large ensemble, with John Kuntz and Remo Airaldi standing out from the crowd, variously portrays peasants, soldiers, video technicians, and, of course, bears.

Right, the bears. Director Anne Kauffman integrates them into the action seamlessly enough, just as she finds ways to orchestrate the moving walls and intermittent video projections of Mimi Lien's set design. But whereas Vlad's appearances make a certain kind of hallucinatory sense, I honestly can't tell you just what the bears are for. Like so much in this richly imagined but incompletely conceived work, they're a tantalizing image of . . . something. And they left me wanting something more.

Ceausescu meets Dracula at the ART