Missed opportunity from a master of empty space 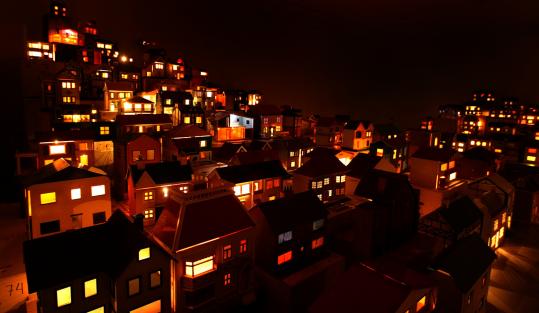 How do you articulate absence? It's easy enough for photographers, since absence is built into the medium itself (every photograph is a physical trace of a moment now lost). Poets, too, can make use of the metaphors and similes of language; consider, for instance, W. S. Merwin's indelible short poem "Separation": "Your absence has gone through me/Like thread through a needle./Everything I do is stitched with its color."

For sculptors, who work with solid materials, the task might appear harder. But the British artist Rachel Whiteread settled on a simple but effective means of articulating absence when (perhaps with the ghostly effects of photographic negatives in mind) she began casting negative spaces. She cast the interior of a room ("Ghost") in plaster, and the inside of a whole house ("House") and the empty spaces abutting books in a library (for a Holocaust memorial in Vienna) in concrete.

Transforming empty space into solid objects, all of these works made absence poignantly present.

Whiteread's idea was not exactly original: The American artist Bruce Nauman had cast the empty spaces under chairs back in the 1960s. (Whiteread once paid homage to Nauman with resin castings of the space beneath 100 chairs. The work was on display in the Royal Academy of Arts' "Sensation" exhibition in 1997). But Whiteread sensed a deep vein she could mine, and she has been mining it assiduously for almost two decades.

Empty space is by definition amorphous, and it's very often boundless (where precisely does the space beneath a chair end?). Whiteread's struggle to give form to something so inchoate has parallels with our emotional life, especially our attempts to cope with loss. The solid, implacable look of her work, which reads like minimalism but with textures and colors suggesting hidden warmth, makes the best of it seem at once haunted and stoic.

So she is a very interesting artist. It's sad, then, that the Rachel Whiteread show at the Museum of Fine Arts is such a disappointment.

The fault lies partly with the museum, as the show is neither one thing nor the other. It is neither a dedicated installation nor a serious survey. With one room given over to "Place (Village)," an installation that has already been seen in slightly different form in Naples and London, and another to an ad hoc gathering of barely connected work sourced mainly from Whiteread's dealers (including 16 desultory drawings), it is an awkward mix of the two, and well below the standard a museum like the MFA should be aiming for.

But the problem lies also with Whiteread, because the centerpiece of the exhibition, an installation of vintage dollhouses lit from within and displayed in a darkened room to suggest the effect of a village at night, just isn't that great.

Entering the room, I hasten to say, is a joy: It's dark, it's intimate, it's mysterious, and it takes us instantly back to childhood. Each of the dollhouses, collected by Whiteread herself over the past two decades, is unique. Some look terrifically fancy, others rough and rudimentary. They come in a wide variety of architectural styles. Some are mounted on the wooden crates that were made to house them, and these "plinths" get taller as the houses get nearer the walls, so the village seems to be perched on a hillside.

Crucially, all the houses are empty, so the sense of huddled life and domestic warmth that the installation as a whole creates is illusory - poignantly so.

I told myself that just as Whiteread articulates emptiness in her cast work by giving it solid form, here she emphasizes emptiness with light. And for a moment, it sounded good. But no amount of rationalization could change the fact that the installation simply failed to deepen in my imagination. What was initially charming never really became anything more.

It turns out that Whiteread and her team of assistants have been busy casting the interiors of these dollhouses. I don't know what her plans for them might be, but I can't help feeling that the idea sounds more promising than this rather flat conceit.

Among the six sculptures in the second gallery and in the corridor connecting the two, only one has the force and resonance Whiteread's best work can achieve.

The earliest of them is "Untitled (Amber Floor)," a narrow mat of orange rubber that stretches along the floor in a straight line like one of Carl Andre's floor pieces, before curving up at the wall. It dates from a period (the early 1990s) when Whiteread was interested in the hidden spaces in houses, such as those between the ceiling and the roof, or beneath the floor. She had begun to use materials other than plaster, her original medium of choice, including resin and rubber, which had warm, tactile, almost fleshy associations.

But as with many of Whiteread's less successful works, it is impossible to say what actual space this piece relates to. As a result, instead of being interestingly reticent in giving up its associations, it remains simply mute.

"In-Out-VI" and "Double-Doors II (A+B)" are more recent sculptures based on doors. They are propped against the gallery walls, and we are invited by a wall label to find them cold and sinister: They made me think of the door in the parable "Before the Law" in Kafka's "The Trial" ("This door was intended only for you. I am now going to shut it."). We learn that Whiteread has made these pieces by casting the negative impression of each side of a door and then joining them back to back.

But the conceit is simply too fussy. You can't grasp it simply by looking at it, because the end product exactly resembles a door.

I was much more impressed by a simple sculpture that stands quietly on a ledge protruding from a wall. Called "Circle," it is in fact a narrow box with a square front divided into four quarters. Each quarter has the ghost of a circular shape emerging in low relief from a backdrop of horizontal ridge lines.

Assuming the form as a whole to be a cast of the negative space inside a cardboard box doesn't make it easier to work out what it was that left these strange imprints, and we are never told. But by combining elements of accident with an air of solidity and permanence, the piece gives congested force to feelings of transience, vulnerability, and abiding mystery.

It shows Whiteread at her best. If only there were more things here to back it up.