Spilling across half a dozen rooms at the Institute of Contemporary Art, Tara Donovan's hypnotic work subdues thought the same way that viral infections subdue the body. Struggling against the initial effect is pointless. Most of these works are so straightforwardly beautiful, so right, that you have no choice but to submit.

And yet, just like the immune system, the mind bounces back - possibly even with a new spring in its step.

Donovan's show comes exclusively to Boston hard upon the news that she has been awarded a MacArthur Foundation Fellowship "genius grant." It includes rolls of adding machine paper piled on the floor, Styrofoam cups suspended from the ceiling, and enough plastic drinking straws to cover a wall.

As a proposition about beauty, it is utterly unlikely. But a proposition it is, and it's one of the most stimulating I've come across.

To be bowled over by the beauty of, for instance, oodles of strips of Mylar folded and clustered and arrayed on the floor so they resemble a kind of floor-hugging, hemispherical marine life - at once velvety and glittering, soft and shiny - is not something most of us would anticipate. Nor would many of us expect a transparent wall filled with polyester film - layers of it folding, twisting, and swishing like molten sugar or caramel-colored hair - to be among the most beautiful things you would see all year.

It's this unforeseeable element that accounts for the delight Donovan's work prompts.

But behind the delight, qualms lurk. For Donovan deliberately favors materials that most of us prefer not to think about: plastic cups, straws, buttons, toothpicks, Styrofoam, and Scotch tape.

We don't want to think about them because, when we do, we find them unbeautiful. In fact, when the Greek philosopher Plotinus defined the ugly as that which makes the soul "shrink within itself, denies the thing, turns away from it, resentful and alienated from it," I'm betting it was precisely the humble plastic drinking cup he had in mind.

Plastic cups and Styrofoam and most of the other materials employed by Donovan represent cheapness, waste, unbridled consumption, litter. Especially when seen in abundance, and abundance is at the heart of what Donovan does: One work here uses more than 1 million 7-ounce plastic cups.

But Plotinus also remarked upon our failure to "habitually examine or in any way question ordinary things." We would be amazed at these ordinary things, he suggested, "if we were familiar with them and someone explained their powers."

Donovan doesn't exactly explain the powers of, say, clear plastic buttons. But she demonstrates properties many of us never expected them to have. One of the finest pieces here, called "Bluffs," is a structure made from buttons held together by glue. It rises from the floor like a crystalline landscape of Chinese mountains, or stalagmites, or an underwater grotto. As a large structure made from small things, it's impressive.

But the most remarkable thing about it is that it never comes into focus. The buttons, due to the massively combined effect of shifting degrees of opacity and transparency, blur light, beguiling the eye.

Elsewhere in the show, strips of Scotch tape standing on edge proliferate across a whole floor ("Nebulous"), so they resemble a soft, scattered fog, while Styrofoam cups suspended from the ceiling in biomorphic arrangements ("Untitled (Styrofoam Cups)" are backlit, giving them a warmth and expansiveness that suggest the beneficence of nature.

Of course, it's nice to encounter almost any proposition about beauty these days - even one as potentially ironic as Donovan's. Until a few years ago, beauty's repression in contemporary art was almost absolute. No one talked about it, hardly anyone peddled in it. If they did, they did it furtively, guiltily, always making out that other things - more "important" things - were on their mind.

Beauty has enjoyed a bit of a comeback in recent years. But there has been something willed and strained about the revival. Most recent discussions of beauty are about as appealing as a laborious explanation of a bad joke.

Donovan's unabashedly beautiful work is a step or two forward from all this. It is not only beautiful, it is relaxed about being so, leaving her scope to admit all kinds of subtleties and ironies into her fantastically simple, if labor-intensive, forms.

Above all, she seems engaged by a very particular trio of contradictions: between contraction and relaxation, between containment and spillage, between coolness and warmth.

The fat rolls of adding machine paper used in "Moiré," for instance, are tightly wound to hold their spiral forms. But without unraveling them, Donovan lets them sprawl on the floor, nestling against and on top of one another like coiled snakes. Gravity gives them no choice but to relax and spill out of their "ideal" shape. The result is an image of indolence as suggestive as Dalí's melting clocks.

Or consider Donovan's large cube consisting entirely of toothpicks. This signature piece resulted from a chance discovery in the studio, which ICA curators Jen Mergel and Nicholas Baume recount in the catalog.

Donovan "knocked over a big box of toothpicks, picked it up, and then noticed that the spilled contents had latticed into a shape that echoed the perfect corner of their container."

"A lot of art making comes from just paying attention to accidental discoveries," says Donovan. Her boxes of toothpicks and pins seem marvelous because they set the idea of containment, measurement, and precise proportions against an apprehension of anarchy (let each toothpick fall where it may!) and relaxation (no binding agent holds them together).

For me, the work using polyester film ("Untitled") was, hands-down, the most beautiful. Commissioned by the ICA for this show, it is a long, thin display case that can be seen from both sides of the wall it occupies, like a stained glass window. Irradiated by light from the harbor, the strips of film take on the magnificent caramel color I mentioned earlier, but they also create strange optical effects akin to a kaleidoscope when seen head-on.

Seen from the harbor looking in, color drains away, but what remains - random linear patterns created by the bunching and layering of the film - is like a grisaille version of the same image, giving it a whole new dimension.

At the beginning of the movie "Sex, Lies and Videotape," the uptight character played by Andie MacDowell confesses to her therapist that she's "gotten real concerned about what's gonna happen to all the garbage."

"You know," she continues, "we have to run out of places to put this stuff eventually."

Donovan finds no helpful solution to the problem, and her work is unlikely to allay our anxieties about mass production and senseless consumption. But it suggests an attentiveness to beauty, in its unlikeliest manifestations, that may be the first condition of any improvement. 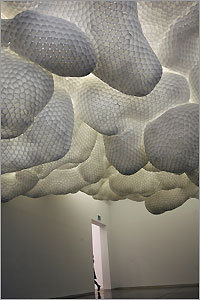 (David L. Ryan/Globe Staff) In a show at the ICA, Tara Donovan's "Untitled (Styrofoam Cups)" is suspended from the ceiling in biomorphic arrangements.