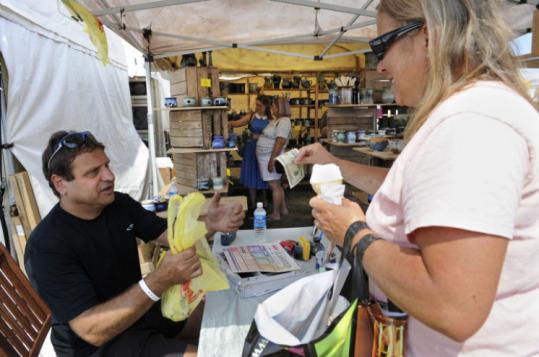 MANASSAS, Va. - Thirty times a year, Brian Beckenheimer puts his pottery into a big white van and drives. One weekend to Michigan, another to Richmond, mostly up and down the East Coast, from one craft show to another, selling his wares. Then it's back home to the studio to replenish his stock.

It's the same kind of life for jewelers Mariya and Anatoly Sigalov, who emigrated from Ukraine and are doing the craft show circuit here.

Likewise for clothing artist Dori Herrmann and her husband, Dennis, but with a twist. The Herrmanns drive from show to show in a motor home, pulling a trailer with her studio behind them.

The craft show life. You might call it the artist's rendition of a traveling salesman.

It's set-up on Thursday, pack-up on Sunday, with selling in between. Often, there are only a few days before the next show.

"It's not an easy life, but I like it. I love it," Beckenheimer said. "The best thing about being at shows on weekends is the customers. They're like family to me."

Linda Van Trump, managing director of the Craft Organization Development Association, said she believes overall sales today are about at the same level that they were in 2000. She blames the lack of growth on the struggling economy. "The market has changed," she said. "Probably the middle end is not doing as well, but the upper end is still selling."

Still, rising gas, motel, and other costs are cutting into profits, forcing some to leave the business, she said. At the same time, "young people are not going into it as much as they used to because it's more difficult to make a living," she said.

So where does that leave people like Beckenheimer, who makes his living selling pottery?

On a beautiful Sunday morning in late summer, he talked to customers who came to his booth at the Sugarloaf Craft Festival in Manassas to admire his ikebana pots for Japanese floral arranging, mugs, vases, bowls, and other pieces of pottery. "My stuff is functional pottery," he said. "Stuff people use every day. I keep my prices reasonable and affordable."

But the crowd was small, and there was a full day to catch up on. The show hadn't opened as scheduled the day before because of heavy rain. The 150 exhibitors received vouchers to participate in another Sugarloaf show, show manager Lorrie Staley said. On average, the show charges about $525 for exhibit space.

Thousands of craft shows and fairs are held across the country each year, some high-end extravanganzas, others as simple as the church bazaar.

Carol Sauvion, co-executive producer of the PBS series "Craft in America," calls them a "coming together" matching artisans and their customers.

"It is a public expression of what is sometimes a very solitary existence," she said.

The craft organization estimated in 2000 that crafts were a $13.8 billion business and that there were about 127,000 craft artists in the United States. Nine out of 10 craftspeople in the United States were white, and nearly 2 out of 3 were female. The median age was 49, according to the estimates.

Half sold their art directly to the public. Of those, half sold it at craft fairs.

Beckenheimer, 53, of Owings Mills, Md., chose this life over going into the family supermarket business in Baltimore.

He apprenticed with master potter Geoffrey Borr in Boston in 1979, worked at a pottery co-op in Newton, Mass., and refined his techniques and glazes during summers on Martha's Vineyard. He returned to the Baltimore area in 1984 and sold his pottery off a pushcart, then from a store in Baltimore's Inner Harbor. But after 18 years, he closed down. "I got frustrated with the whole scene," he said. "I'm a potter and I didn't want to be a boss."

He's been going "full force" at craft shows ever since. The next few months will be particularly tough, he says, with 15 shows in 17 weeks.