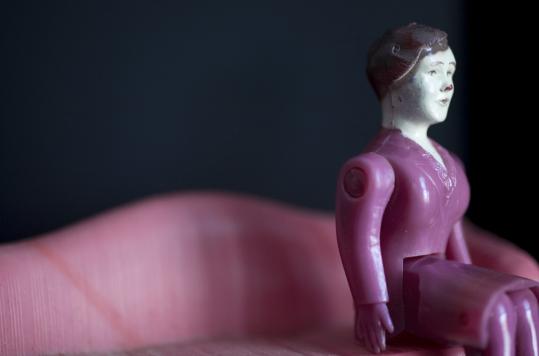 Above: ''Mother Dream'' by Karen Davis is part of a series in which mechanical dolls are posed in domestic settings.
By Mark Feeney Globe Staff / September 30, 2008
Text size – +

WINCHESTER - Three of the four shows currently running under the aegis of the Griffin Museum of Photography - "Sanctuary: Anna Tomczak Photography," "Pins - Pelle Cass," and "The McCann Family: Photographs by Karen Davis" - are notable for how the photographer constructs as well as records his or her subject. The fourth show nicely upends that process. In Charise Isis's "Hudson Valley of the Dolls" it's the photographer's subjects, a troupe of drag queens, who do the constructing: in their case, self-constructing.

At their best, Tomczak's images suggest Wunderkammer, the cabinets of curiosities that collectors in early modern Europe delighted in: jumbles of art objects, geological specimens, antiquities, and natural history oddities. Motifs that Tomczak favors include flowers, birds, insects, eggs, and appropriated images. Tomczak's husband owns an antique and architectural-salvage business, Florida Victorian, and she gets many items she photographs from the store's wares.

At their not best, Tomczak's 39 images suggest what one imagines ads for Florida Victorian might look like. Frame and matte not only enclose a world; they keep out the world, too. This creates a hothouse quality many may find beguiling. To less lavish sensibilities, that quality flirts with kitsch and embraces preciosity.

The few smaller photographs here, such as "Equus, Protea" and "Tribute, the Archivist," suggest that scale does Tomczak a disservice. They have an intriguing delicacy absent from their larger brethren. Quantity ill serves her, too. With the Davis and Cass shows, the cumulative effect of multiple images enhances each. Tomczak might be better off with half as many photographs, or fewer. Her work, a feast of sherbets, reminds us even the finest ices cloy when more than just a few are served.

There's nothing Victorian about Cass's "Pins." Rather, the 20 color photographs recall Eliot's phrase in "Prufrock," "formulated, sprawling on a pin" - or pins. Having torn pictures from magazines and arranged them on cardboard, he sticks map pins (the kind with round colored heads) in the arrangement and photographs the result.

Gaudy in appearance, the photographs are austere in intent. They make us look anew at the fantasies of abundance that define the original layouts. "Pale Rooms," for example, is very funny: Architectural Digest-ready interiors - bland, overpriced, just so - are at once vandalized and enlivened by the yellow, blue, and green pins. The pins are the messy, signs-of-life detritus otherwise absent from these shrines to chilly good taste. They look like freed molecules or small gumballs - a highly subversive, version of eye candy.

In "The McCann Family," construction takes the form of choreography. Karen Davis, who lives in Cambridge and teaches at Lesley University, inherited four mechanical dolls that had belonged to her younger sister, Cheryl, when she died several years ago. Cheryl had called them the McCann Family, and they clearly mirrored the sisters' own family, with a crucial substitution. Along with a mother and father doll, there was a boy doll and a girl doll.

Cheryl called the boy doll Tom. That she identified with him was plain. Cheryl, who suffered from spina bifida, said Tom had polio and gave him crutches and braces, as she had.

This background knowledge enriches Davis's 11 images of the dolls. It doesn't add to their emotional power, though, which is intrinsic. Strong feelings are being worked out here. The dolls' fubsy shapes and dulled, splotchy colors add to the poignance even as their very otherness has a distancing effect.

Davis places the dolls in a variety of domestic and narrative settings. The titles speak for themselves: "Dinners Are Tense," "Mother Can Be Tender," "Tom Walks Alone." Her handling of space is very effective. How Davis arranges the dolls is even more important to their impact, which is great, than how she photographs them.

For "Hudson Valley of the Dolls" (such a title!), Charise Isis (such a name!) spent four years photographing exotic dancers. Isis's interest in, as she puts it, "performance and the 'hyper-feminine mystique' " next led her to photograph drag queens. Further encouraging her interest was the discovery that her next-door neighbor belonged to a drag troupe called the Hudson Valley of the Dolls (this was in upstate New York).

The 20 portraits are large (22 inches by 26 inches) and affectionate. One sign of the affection is that they're in a slightly blurry black and white, which makes for more flattering and, let us say, lenient renderings. The gentleman in "Babs" does look like Barbra Streisand, sort of. True, his counterpart in "Tina Turner" looks as much like Ike's former consort as John McCain does. The important thing is that the people on display are clearly having fun, and that fun's infectious.

"Hudson Valley of the Dolls" is the first exhibition in a joint collaboration between the Griffin and the Stoneham Theatre. Ideally, though not exclusively, the photographs will tie in to a production at the theater - in this case, the drag musical "Pageant." The space, which is off the lobby, is a nice, comfortable size, neither too small nor large. Best of all, the theater's old movie projector sits in a corner. A splendid and mighty object, it's sculptural and cinematic both.

At: the Griffin Museum of Photography, 67 Shore Road, Winchester, through Nov. 2.