Seeing Karsh in a different light

The Russians have a useful, if untranslatable, term, poshlost. It means something like "self-aggrandizing banality." In his book on Gogol, Vladimir Nabokov describes poshlost as "the falsely important, the falsely beautiful, the falsely clever, the falsely attractive."

Think of the pictures in "Karsh 100: A Biography in Images," which runs at the Museum of Fine Arts through Jan. 19, as a visual equivalent.

It's indisputable that Yousuf Karsh was a very famous pho tographer and took some of the most famous portraits in the history of his medium. Karsh's Churchill, Karsh's Hemingway, Karsh's Bernard Shaw: These are each man's default image in our collective memory. Fame and ubiquity are not the same thing as merit, though, as this exhibition observing the centenary of Karsh's birth demonstrates.

Not that "Karsh 100" intends disrepect of any sort. It's handsomely appointed, right down to including Karsh's passport, appointment diary, and one of his cameras. There are portrait busts of Karsh and his widow (he died in 2002). A video monitor plays a "60 Minutes" interview with him.

More important, the show's 112 photographs are astutely hung. Karsh portraits of the great and mighty line the outer walls of the Rabb Gallery, their familiarity drawing in the casual viewer. Lesser-known images - early work, Canadian scenes, photo essays on Rome, pictures from the making of the film "Zulu" - are on temporary walls inside the larger space. A sense of public and private is simply and effectively expressed.

With "Karsh 100," the MFA has done as well by the photographer as could be imagined. That's only fitting, as he and his widow have done very well by the museum. Before his death, he donated 199 of his photographs to its collection. The museum has an annual Karsh Lectureship in Photography. The positions of both photography curator and assistant curator are named for the Karshes. The Museum School has a Karsh Prize for Photography.

Yet Karsh's very real if amorphous achievement belongs not to the world of art but celebrity. He wasn't so much a photographer as a brand name. Karsh of Ottawa was a label on a conspicuously worn luxury good. Run down the checklist: shirt by Turnbull & Asser? shoes by Lobb? portrait by Karsh of Ottawa? They're badges of having made it - really, really made it. Presidents, popes, monarchs, movie stars, Nobel Prize winners, all eagerly sat for Karsh. Of course they did. He showed the famous - "the great of spirit," as he earnestly called them - the way they wanted to be shown.

Born in Armenia, Karsh arrived in Canada in 1925 and lived with an uncle who was a photographer. He moved to Boston in 1928 to work with the photographer John Garo. He stayed for three years (and would spend another five here, at the end of his life).

Karsh became increasingly prominent in Ottawa as a photographer. Canadian Prime Minister Mackenzie King wangled him two minutes with Churchill in 1941. Karsh "respectfully" (his word) pulled the cigar out of Churchill's mouth, producing a scowl to make John Bull proud. Karsh's camera recorded the results, and his future was assured. The portrait has been called the most reproduced of the 20th century. It's in "Karsh 100," as are those of Hemingway and Shaw and numerous others: Cousteau, Castro, Casals, Calder . . . and those are just the C's.

In his book about the Vietnam War, Michael Herr describes the unsettling experience of interviewing General William Westmoreland. "I came away feeling as though I'd just had a conversation with a man who touches a chair and says, 'This is a chair,' points to a desk and says, 'This is a desk.' " It's the Karshian approach made flesh. He points his camera and says, "This a great man," "This is a great woman." Subtlety, nuance, differentiation - the stuff of revealing portraiture - are beside the point. What matters is the well-upholstered human furniture.

Every famous individual is both a person and a persona. Any good portrait records the tension between the two, probing it, showing how the two do - and do not - coincide. For Karsh, person and persona were congruent. The only portrait here where that isn't the case shows, of all people, Boris Karloff. The obvious humanity of this man best known for playing monsters makes for a fascinating, and slightly unsettling, juxtaposition.

Always a skilled technician, Karsh had his moments of artistry, as the Karloff photograph indicates. There's a quite marvelous portrait of Sophia Loren, her grin almost as big as her oversize hat. It's the one color image in the show. Color injects a liveliness, an unpredictability, otherwise absent from Karsh's waxworks splendor. A fine portrait of Georgia O'Keeffe shows what Karsh could do when he abandoned his relentless reliance on theatrical lighting. Using the natural light of the desert, he demonstrates an uncharacteristic elegance, right down to the curve of O'Keeffe's arm echoing that of a set of antlers mounted on the wall above her.

Several of the Canadian scenes are arresting, if not much more than that. Visually, it's hard to go wrong with the Calgary Stampede or an auto assembly line. Even so, more than a glance at the two workers in the Ford paint shop is to be struck by how Karsh has made them look like mannequins. It wasn't only the great who got the full waxworks treatment.

Unaware of its significance, Karsh once related a telling anecdote. It concerned a portrait assignment he'd had in Moscow. "Chairman Brezhnev agreed to sit for me only if I made him as beautiful as Audrey Hepburn." The show has a Hepburn portrait, but no Brezhnev. In compensation, there's one of Nikita Khrushchev (in furs and balaclava, no less).

The Brezhnev request is hilarious, right? The ridiculousness of that ugly old bear Leonid looking like the lovely sylph Audrey! Not really. Always in intent, and all too often in execution, Karsh portraits are simulacra of one another: reverent, oleaginous, unquestioning. Again and again we get the same motifs: clasped hands, heavenward gaze, soulful expression. Leonid, Audrey, Yousuf, whoever: Hail, hail, the gang's all here. Everything that rises must converge. 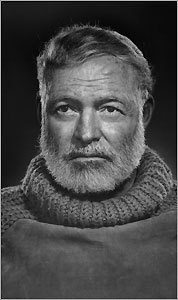 Karsh 100: A Biography in Images